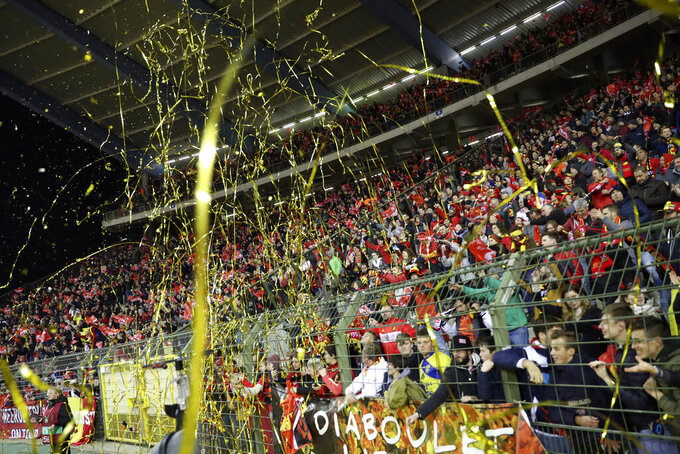 FILE - In this Tuesday, Nov. 19, 2019 file photo, Belgium supporters celebrate at the end of the Euro 2020 group I qualifying soccer match between Belgium and Cyprus at the King Baudouin stadium in Brussels. UEFA set itself a challenge deciding nine years ago to let a dozen cities around Europe host its marquee European Championship in 2020. The multi-country project means more fans can see their own team in a stadium than if Euro 2020 was being traditionally hosted by a single nation amid international travel restrictions. (AP Photo/Francisco Seco, File)

GENEVA (AP) — It seemed ambitious nine years ago when UEFA said it would organize the 2020 European Championship in 13 different cities around the continent.

It seemed optimistic last year when UEFA decided to stick to a 12-city plan after postponing Euro 2020 when the coronavirus pandemic was declared.

Yet the quirky, one-time-only hosting plan looks to be the best result fans could hope for with the coronavirus continuing to limit international travel.

Nine of the 11 hosts — all except Azerbaijan and Romania — qualified for the 24-team tournament, giving tens of thousands of fans the chance to see at least two home games.

That’s a better outcome than having a single host nation, like France in 2016 and Germany in 2024, which most likely would have had to shut borders to many visiting fans. Back in 2012, the strongest bidder for the 2020 tournament was Turkey, a country which just had the Champions League final taken away for the second straight year.

“We have a big advantage that we have a lot of home teams,” UEFA tournament director Martin Kallen told The Associated Press.

More than 50,000 Hungarian fans could be inside Puskas Arena in Budapest to watch the host team play World Cup champion France and defending European champion Portugal in Group F. About 30,000 Russians should be allowed in the stadium in St. Petersburg to see their team host top-ranked Belgium and neighboring Finland in Group B.

Kallen acknowledged the logistics of a late move to a single-host option were “in principle impossible" as the pandemic surged in the European winter.

And not necessarily safer.

“I think it was a wrong estimation to think it would be much easier if (Euro 2020) was only in one (place),” Koch told the AP.

Having 12 different hosts, until Dublin dropped out in April, gave UEFA flexibility and a wide sweep of governments focused on health and security issues.

“The risk that (a local epidemic) goes wild is much less,” Koch said.

Fan issues were the uncertain factor this year because UEFA proved last August with the Champions League and Europa League mini-tournaments that teams can travel and play safely.

Travel by private jet and strict UEFA-managed protocols at airports and hotels, limiting contact with staff and other customers, are now the norm for international players.

Only two national team games were canceled, both in November. Norway’s public health officials stopped the team from traveling to Romania, and Ukraine players were quarantined in Switzerland.

“The discipline of the teams and professional approach was very good,” Kallen said, noting that for young players “it’s not easy to be in the bubble all the time.”

Team-wide PCR tests are mandatory the day before games organized by UEFA, which hired a German laboratory last year to run the program and give results at least six hours before kickoff.

And UEFA is prepared for an outbreak at Euro 2020. Games can be postponed for up to 48 hours if more than half of a squad tests positive, with replacements brought in.

Kallen said players testing positive is his biggest concern for Euro 2020, which adds one month and 51 games to an already stressful and congested season.

“There is a legitimate concern that the quality (of play) will be impacted by the level of fatigue,” said Jonas Baer-Hoffmann, general secretary of players’ union FIFPRO.

End-of-season games are where most is at stake, he warned, after “the longest period of exposure to the intensity. They are already exhausted when they get there.”

Still, the soccer show goes on. UEFA, fans, players and broadcasters all want Euro 2020 to happen and many of the continent's federations depend on grants from the $2 billion revenue it earns.

“If we plan, we do bubbles, testing, things like this, much more is possible than you think at the beginning," the doctor said, "and closing everything down is not the only solution.”