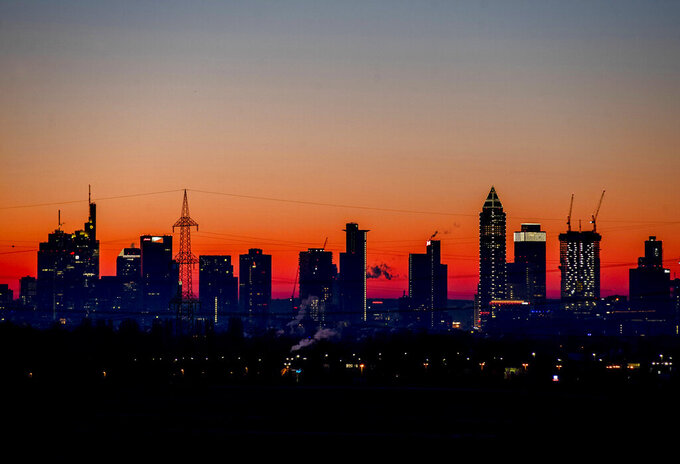 FILE - In this Feb.14, 2021 file photo the sun is about to rise behind the buildings of the banking district in Frankfurt, Germany. The European statistics agency Eurostat released monthly inflation figures Tuesday.(AP Photo/Michael Probst, file)

FRANKFURT, Germany (AP) — The European Central Bank left its key pandemic support for the economy running full blast even as the economy shows signs of recovery thanks to lower virus cases and fewer restrictions on activity in the 19 countries that use the euro currency.

ECB President Christine Lagarde was at pains to underline that there was no discussion at Thursday's policy meeting about dialing back support in coming months.

Speaking at a news conference after the decision by the bank's 25-member governing council, Lagarde said the central bank expects “a sizeable improvement” over the second quarter of the year. But she cautioned that the rebound “continues to depend on the course of the pandemic and how the economy responds after reopening.”

Lagarde said a discussion about reducing stimulus would be “too early, premature" at this point.

While economic activity is picking up, Europe is not expected to reach pre-pandemic levels of output before 2022, well behind the US and China. Economic output was minus 0.3% in the first quarter; the ECB foresees a rebound over the remaining months of the year that would take growth to 4.6% for the year.

The slower recovery could mean Europe will lag the U.S. Federal Reserve in phasing out its pandemic stimulus. Several Fed officials have said that as the economy recovers, the U.S. central bank will eventually have to reassess its stance. Currently it is purchasing $120 billion in bonds each month. The next two-day meeting of Fed policymakers begins Tuesday.

Lagarde downplayed inflation that has ticked higher recently, saying it was the result of temporary factors and an increase energy prices. She said there was still “significant economic slack” holding back underlying inflationary pressures and that the bank was concerned about post-pandemic “scarring” of the economy due to changed consumption habits and loss of jobs leading to workers needing training in new skills.

Holger Schmieding, chief economist at Berenberg bank in London, said that the doves, or stimulus supporters on the council, had prevailed, not a surprise given recent pro-stimulus comments from bank officials.

“Unless the economy unexpectedly stumbles during the summer, the ECB will likely have to change its tune over the next few months and start to scale back its net asset purchases from September onwards,” Schmieding wrote in an e-mailed analysis.

Normally, rising prices would lead a central bank to think about withdraw its stimulus and turning toward tighter monetary policy. But in this case, ECB officials and economists say recent higher inflation figures are the result of temporary factors that will fade, leaving inflation still at an undesireably low level. Eurozone annual inflation hit 2.0% in May due largely to rising energy prices. The ECB’s goal is less than, but close to 2%.

The central bank for the 19 countries that use the euro said in its policy statement Thursday that emergency bond purchases would remain at “a significantly higher pace” over the coming quarter than during the first three months of the year. That mirrored language from its last meeting on April 22, changed only to extend the higher pace of purchases by a quarter.

The ECB has been purchasing around 85 billion euros per month in government and corporate bonds as part of a 1.85 trillion euro ($2.25 trillion) effort slated to run at least through early next year. Purchases were stepped up in March amid lagging vaccinations and high COVID-19 case numbers.

The purchases drive up the prices of bonds and drives down their interest yields, since price and yield move in opposite directions. That influences longer-term borrowing costs throughout the economy, sending them lower.

That’s exactly what the bank wants at a time when many companies are struggling with reduced demand, higher debt and the need to keep credit lines open so they can get to the other side of the pandemic. That is one reason for Lagarde and the bank's governing council to avoid any early discussion of tapering the stimulus, since that could send market borrowing costs higher and hurt the recovery just as it's getting going.

The bank also left its key interest rate benchmarks at record lows. The rate at which it lends to banks is zero; the rate it pays on overnight deposits from bank remains at minus 0.5%