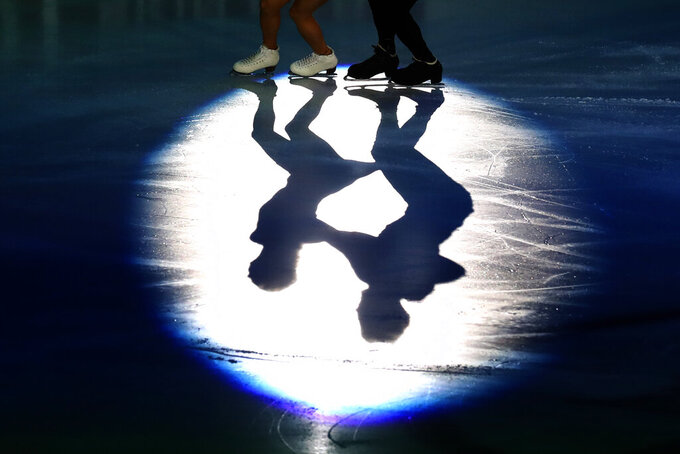 FILE - In this Sunday, Jan. 26, 2020 file photo, Victoria Sinitsina and Nikita Katsalapov of Russia perform during the gala exhibition at the ISU European figure skating championships in Graz, Austria. The European figure skating championships were canceled Thursday Dec. 10, 2020 for the first time in more than 70 years because of the coronavirus pandemic. (AP Photo/Matthias Schrader, File)

LAUSANNE, Switzerland (AP) — The European figure skating championships were canceled Thursday for the first time in more than 70 years because of the coronavirus pandemic.

The International Skating Union said it could not hold the competition, scheduled for Jan. 25-31 in the Croatian capital, Zagreb, “in view of the worsening worldwide COVID-19 pandemic situation and the consequent increasing risks for organizers and participants.”

The European championships have taken place every year since 1947, when they resumed following World War II.

The ISU said it is exploring backup plans in case the world championships can't be held in Sweden in March 2021 as planned. One option could be to combine it with the World Team Trophy in Japan in April, the ISU said. The 2021 world championships will determine the number of entries for each country at the Olympics.

This year's worlds were set for Montreal in March but were canceled as the pandemic took hold and countries imposed quarantine requirements on international arrivals.

The finals of the Grand Prix figure skating series have also been canceled, the ISU said Thursday. They were originally set for Beijing in December as a test event for the 2022 Winter Olympics but were postponed as the ISU sought an alternative host.