On eve of openers, Manfred hopes full capacity by midsummer 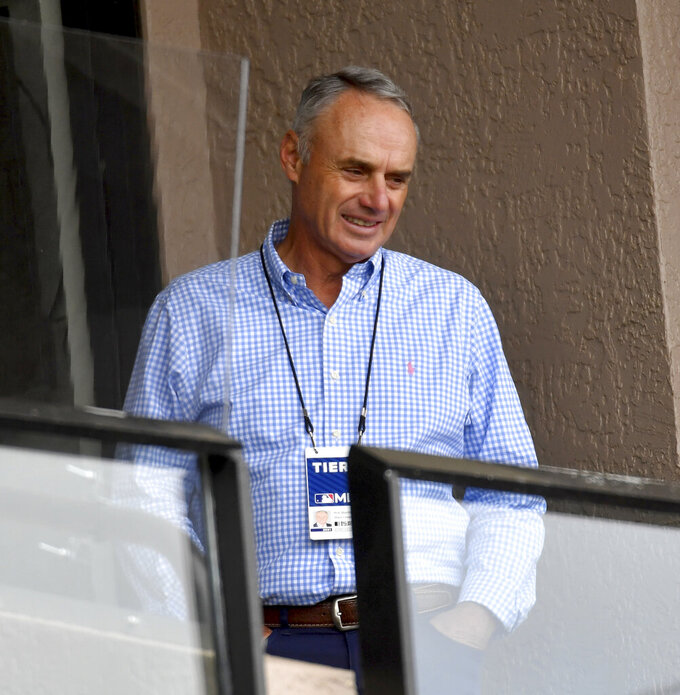 Capacity will be limited to about 12% at the season’s start in Boston and Washington. Twelve teams are at 20%, Colorado at about 43% and Houston at 50%. The only team higher is Texas, at 100%.

“I hope by midsummer that we have ballparks that are unrestricted and we have full fan access,” Manfred said Wednesday during an interview with The Associated Press.

Last year’s shortened regular season was played entirely without fans, who were allowed back only for the NL Championship Series and World Series, and then in limited numbers for games moved to a neutral site in Arlington, Texas.

“For most clubs, this will be another year of significant losses. It’s not going to be the $2.5 to $3 billion that we had last year, but there will be significant losses if we continue in the mode where we don’t have full fans,” Manfred said. “The clubs have done a great job of working with financial institutions they had relationships with in terms of assuring liquidity.”

Manfred thinks most players could be vaccinated against COVID-19 by mid-May. The St. Louis Cardinals and Houston Astros said Monday their players will be offered vaccines before openers, and the San Francisco Giants said some of their players already had received shots.

“I am pleased that we have gotten here,” Manfred said. “I think the players and the club people did a tremendous job during spring training, a continuation of what they did last year. And I’m just hopeful we’re going to be able to play a season that looks like normal.”

He thinks fans long to return to ballparks.

“I see this season as a huge opportunity for baseball,” he said. “We’re an outdoor sport. I think it’s safe or safer to go to outdoor activities. Everybody seems to agree on that. And I think that there’s pent-up demand for entertainment products, and we’re going to do everything we possibly can to take the best opportunity to take advantage of that.”

MLB proposed in January delaying the season’s start until April 28 and cutting each team’s schedule from 162 games to 154, but with full pay. The players’ association rejected the offer.

“I think playing the full slate over the normal period of time, affording us as much flexibility as possible in the schedule should there be hiccups, weather related or other, is of benefit against the backdrop of the experience last year,” union head Tony Clark said in a separate interview with the AP.

MLB’s plan would have included the designated hitter in the NL for the second straight year and would have expanded the playoffs from 10 teams to 14 after allowing 16 to make it following last year’s 60-game shortened season.

“My only disappointment is I think that our research suggests that our fans like the expanded format. And, obviously, our goal is to deliver the product that our fans want to see,” Manfred said.

Manfred and Clark have started discussing the possibility of moving the All-Star Game from Atlanta this July over concern about legislation adopted in Georgia restricting voting rights.

“He wanted to have a conversation. I completely understand why Tony would want to have a conversation about this topic. We’ve actually had a preliminary kind of conversation, and there will be more substantive conversations about that,” Manfred said. “I am talking to various constituencies within the game and I’m just not going beyond that in terms of what I would consider or not consider.”

Manfred expects a series of announcements this summer on All-Star sites for 2023-25. Los Angeles will host in 2022 after the pandemic caused cancellation of last year’s All-Star Game at Dodger Stadium.

Bargaining is likely to start this spring over a labor agreement to replace the one that expires Dec. 1. The DH and expanded playoffs are likely to be issues along with the union’s concerns over alleged tanking by rebuilding teams and service-time manipulation that can delay free agency and arbitration eligibility.

Teams maintain the timing of call-ups is their sole prerogative. An arbitrator denied the union’s grievance on behalf of Cubs third baseman Kris Bryant, ruling in his case there was no evidence of manipulation, without deciding the overall issue.

“Players believe establishing a more competitive environment will drive industry growth and that industry growth will benefit everyone — fans, owners players— believe that having clubs incentivized for competing and succeeding rather than rewarded for repeatedly losing is beneficial for the industry,” Clark said. “We believe in making adjustments to the system so that the younger players who are producing and increasing value for their clubs are more fairly compensated for it. And we believe that many of the adjustments associated with those moving pieces will help restore meaningful free agent markets for experienced, veteran players.”

In-game video use has been restored this season, on team iPads with catcher’s signals not visible. It was banned last year as the fallout of the Houston Astros’ sign-stealing scandal, with clubhouse televisions turned off to discourage gathering during the pandemic.

“The clubs could live with or without in-game video as long as it’s an even playing field,” Manfred said. “Our effort and expense to restore in-game video was really to deliver something that some segment of the player population thought was important to them.”