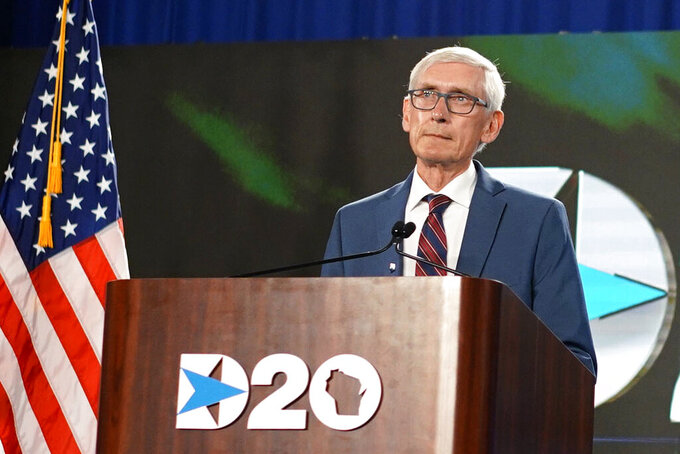 FILE - In this Aug. 19, 2020 file photo, Wisconsin Gov. Tony Evers speaks during the third day of the Democratic National Convention in Milwaukee, Wis. Evers says he’ll likely include criminal justice reforms in the next state budget as Wisconsin emerges from a tumultuous year of protests over police brutality and racism. The governor told The Associated Press in a year-end interview that the executive budget will “hopefully” include proposals to resolve criminal justice disparities. He declined to offer specifics. (Melina Mara/The Washington Post via AP, File)

MADISON, Wis. (AP) — Gov. Tony Evers' executive budget could include criminal justice reforms as Wisconsin emerges from a tumultuous year of protests over police brutality and racism, setting up another potential conflict with Republicans who have been reluctant to take any action to address police protocols.

Evers told The Associated Press in a year-end interview that he may include criminal justice reforms in the budget that will “hopefully” resolve disparities that exist in the system. He refused to offer any specifics beyond saying he hopes to offer proposals “people will engage on in a positive way,” leaving it unclear whether he wants to reshape police standards or reform the prison system, or both. He did say the state must find a way to resolve problems at Lincoln Hills, the state's youth prison, and help inmates avoid reoffending.

The nation was seized by widespread Black Lives Matter protests this summer over the death of George Floyd in Minneapolis. Floyd, who was Black, died on Memorial Day after a white police officer pressed his knee into his neck for several minutes, even after Floyd said he couldn't breathe. Wisconsin saw a number of protests sparked by local police shootings in the southeastern corner of the state as well. In August a white officer in Kenosha shot Jacob Blake, who is Black, in the back during a domestic dispute, triggering several nights of protests. During one of the protests Kyle Rittenhouse, a white 17-year-old from Antioch, Illinois, opened fire on three people, killing two and wounding one.

Evers called the Republican-controlled Legislature into a special session following the Kenosha protests to pass a series of police reform proposals, including banning chokeholds and no-knock search warrants, creating use-of-force standards and funneling grants to organizations that work to resolve conflict and prevent violence.

The GOP refused to go along with him, gaveling in and out of session in less than a minute without taking any action on the proposals. Assembly Republican Speaker Robin Vos called the session divisive and political. He has appointed his own bipartisan task force to review police procedures. That means any changes Evers may propose to police standards through the budget probably won't make it through the Republican-controlled finance committee.

Republicans and Democrats have agreed that the state needs to close Lincoln Hills. The youth prison outside Irma in northern Wisconsin has been plagued by allegations of inmate mistreatment for years.

Lawmakers agreed in 2018 to close the prison by 2021 and replace it with smaller regional facilities, with counties running facilities for low-level offenders and the state running facilities for more serious ones. But the cost of setting up the new detention centers has exceeded initial estimates by tens of millions of dollars, leaving the plan in doubt. Evers has pushed the closure date back to July 2021 but has said it may take even longer.

Evers commented on a host of other issues facing the state next year, including:

The governor stressed that the state won't return to normal any time soon. The path to widespread vaccinations will be bumpy and all depends on how much vaccine the federal government allocates to the state, he said. Small businesses and farmers will continue to need help to survive, he said. He's still hopeful he can reach a compromise with Republican legislators on a COVID-19 relief bill. Negotiations between his office and the GOP have come to a standstill, but Evers said the two sides should at least pass the two dozen or so initiatives they do agree on, including Medicaid coverage for testing and vaccinations and a plan to eliminate a backlog of unemployment claims.

Republicans in the state Senate last year fired state Agriculture Secretary Brad Pfaff after Pfaff criticized the GOP for releasing funds for mental health services for farmers. The firing was unprecedented and angered Evers. Several other cabinet secretaries, including Health Services Secretary Andrea Palm and Transportation Secretary Craig Thompson, have yet to receive confirmation votes and Republicans have talked about ousting them too. Evers said his appointees are doing their jobs and even though they may have done something “that politically or emotionally doesn't jive with an individual senator, that's just no reason to fire somebody.”

The Legislature is due to redraw lawmakers' district boundaries in 2021. Backed by then-Gov. Scott Walker, Republicans 10 years ago reworked the lines to consolidate their power and ensure legislative control for the decade. This time around the GOP will have to contend with Evers' veto pen. The governor told the AP that he would sign the plan if it contains “many” competitive districts, but he wasn't optimistic that would happen.

Evers told the Milwaukee Journal Sentinel that he will in the next year extend the statewide face mask mandate as soon as it expires in January, consider asking state lawmakers to legalize recreational marijuana to boost revenue and likely veto any new legislation that would place stricter rules on voting. Republicans have said they might change rules for people who vote absentee by declaring themselves indefinitely confined, which allows them to bypass the state’s voter ID requirement. “I’d have to see (the proposals) obviously, but the idea that we’re going to solve these problems by making voting more difficult — I just can’t accept,” Evers said.