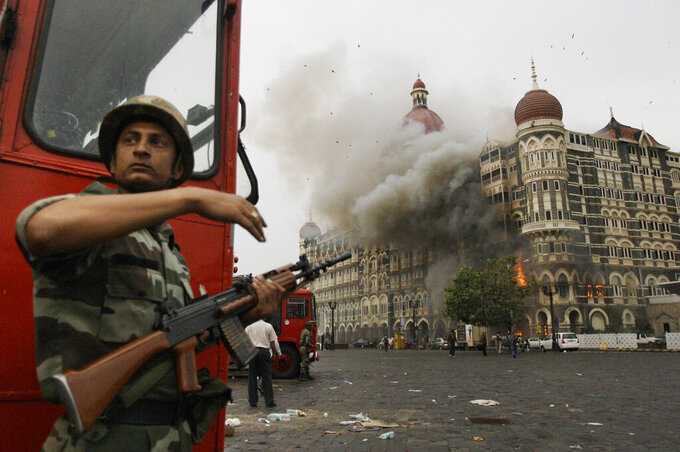 FILE - In this Nov. 29, 2008, file photo, an Indian soldier takes cover as the Taj Mahal hotel burns during gun battle between Indian military and militants inside the hotel in Mumbai, India. A Chicago businessman convicted of supporting terrorist groups has been arrested in Los Angeles to face charges in India for attacks in Mumbai in 2008 that killed more than 160 people. Federal prosecutors said Friday, June 19, 2020, that Tahawwur Rana, a Pakistani-born Canadian, was arrested after winning an early release from a Los Angeles federal prison because of coronavirus. (AP Photo/David Guttenfelder)

Tahawwur Rana, a Pakistani-born Canadian, has been charged in India with conspiring to plot and carry out the deadly attacks that are sometimes referred to as India’s 9/11.

Rana, 59, was convicted of a terrorist charge connected to the group behind the Mumbai slayings, though U.S. prosecutors failed to prove he directly supported the four-day rampage.

Rana was serving a 14-year sentence when he was granted early release from a Los Angeles federal prison last week because of poor health and a bout of coronavirus. But he never got out of prison before being arrested to face extradition to India, prosecutors said.

He has been charged with murder and murder conspiracy in India, according to court documents. A request for comment from Rana's public defender was not immediately returned.

Rana was convicted in Chicago in 2011 of providing material support to the Pakistani terror group Lashkar-e-Taiba, which planned the India attack, and for supporting a never-carried-out plot to attack a Danish newspaper that printed cartoons of the Prophet Muhammad in 2005. The cartoons angered many Muslims because pictures of the prophet are prohibited in Islam.

Jurors cleared Rana of a more serious charge of providing support for the attacks in Mumbai, India’s largest city, that killed 166, injured nearly 240 and caused $1.5 billion in damage.

Rana's lawyer said at trial that he had been duped by his high school buddy, David Coleman Headley, an admitted terrorist who plotted the Mumbai attacks. The defense called Headley, the government’s chief witness who testified to avoid the death penalty, a habitual liar and manipulator.

Rana was accused of allowing Headley to open a branch of his Chicago-based immigration law business in Mumbai as a cover story and travel as a representative of the company in Denmark.

Prosecutors said Rana knew Headley had trained as a terrorist. Headley shared information of the scouting missions he conducted in Mumbai and of the Taj Mahal Palace hotel, where gunmen later slaughtered dozens of people.

Headley, who was born in the U.S. to a Pakistani father and American mother, said his hatred of India dated to his childhood when his school in Pakistan was bombed by Indian military planes during a war between the countries in 1971.

Months after the Mumbai attacks, Headley, who did not take part in the attacks, told Rana he was “even with the Indians now,” according to a court document. Rana said they deserved it.

Headley, who pleaded guilty to conspiracy to murder, was sentenced to 35 years in prison. As part of his plea deal, he can't be extradited to India.

Only one of the 10 Mumbai terrorists survived the attack and went on trial. He was convicted, sentenced to death in India and hanged.

This story has been corrected to reflect that the terror attacks were over four days, not three.