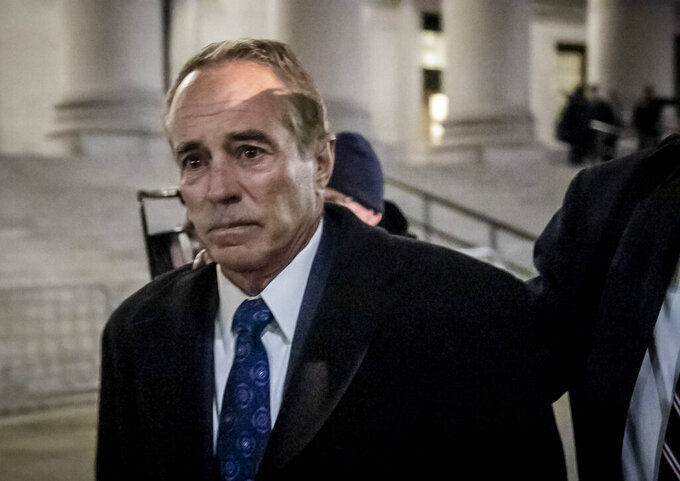 FILE- In this Jan. 17, 2020 file photo, former U.S. congressman Christopher Collins leaves federal court in New York after being sentenced to two years and two months for helping his son and others dodge $800,000 in stock market losses. The first member of Congress to endorse Donald Trump for president four years ago cited the coronavirus Thursday, Oct. 1, 2020, as he asked to delay serving his 26-month prison sentence. Collins was supposed to report to a federal prison camp in Pensacola, Florida, on Oct. 13 after pleading guilty last year to conspiracy to commit securities fraud and lying to law enforcement officials. (AP Photo/Bebeto Matthews, File)

NEW YORK (AP) — The first member of Congress to endorse Donald Trump for president four years ago cited the coronavirus Thursday as he asked to delay or modify his 26-month prison sentence.

Christopher Collins, 70, is supposed to report to a federal prison camp in Pensacola, Florida, on Oct. 13 after pleading guilty last year to conspiracy to commit securities fraud and lying to law enforcement officials.

In a letter, lawyers for the former Republican congressman asked a judge who sentenced him in January to modify the sentence to eliminate incarceration or let him delay starting it until December.

“With a vaccine predicted in the near future, it is particularly prudent for a short additional delay,” they wrote, suggesting a Dec. 8 date to report.

They cited the coronavirus, saying it “continues to rage in Florida” and Collins’ age and health condition put him at great risk of serious or life-threatening complications if he contracts it. They said prosecutors opposed the request.

Collins was representing the 27th Congressional District of New York when prosecutors said he fed inside information about a biotechnology company to his son so his son and friends could avoid $800,000 in stock losses before an announcement of a failed drug trial caused the stock to plunge 92 percent.

According to an indictment, Collins learned the bad news in an email from the chief executive of Innate Immunotherapeutics Ltd. while Collins was attending the Congressional Picnic at the White House on June 22, 2017.

At the time, Collins sat on the company board and was its largest shareholder, with nearly 17% of the shares of the biotechnology company headquartered in Sydney, Australia. It also has offices in Auckland, New Zealand.

Prosecutors said Collins and his son, Cameron, were worth $35 million when they conspired to sell the shares. Cameron Collins also pleaded guilty in the conspiracy but was spared a prison sentence.

Christopher Collins was a vocal Trump supporter when he became the first member of Congress to endorse him as a presidential candidate. When he was charged in 2018, he vehemently denied wrongdoing, with a spokesperson calling a House Ethics Committee inquiry into Collins a “partisan witch hunt.”

He resigned from Congress when he decided to plead guilty, leaving his district's constituents without representation in Congress.

Prosecutors faulted Collins for campaigning for a reelection race he won after his arrest and then continuing to serve.

“I stand here today as a disgraced former member of Congress,” Collins said at sentencing. “My life has been shattered.”