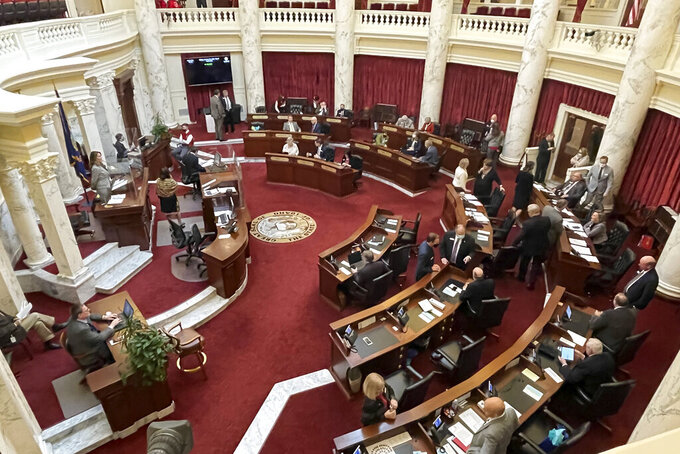 BOISE, Idaho (AP) — Two former Republican speakers of the Idaho House took the unusual step of releasing a letter Wednesday blasting the Republican-dominated Legislature for its attempts to strip GOP Gov. Brad Little and future governors of emergency powers during crises like the coronavirus pandemic.

U.S. Rep. Mike Simpson and Bruce Newcomb called on lawmakers “to end the political jockeying and untruths about emergency declarations and do what is right for the people of Idaho and our state’s economy.”

The letter follows Little's anger-tinged speech on live television last week, when he ripped lawmakers and accused them of perpetuating false information and trying to score political points rather than help fight the pandemic.

The unusual intra-party dustup among the most powerful Republicans in conservative Idaho comes as confirmed COVID-19 infections in the state surpass 160,000 and deaths near 1,700.

Meanwhile, state health leaders are pressing federal officials to explain why Idaho was allotted far fewer doses of coronavirus vaccine than most other states. About 100,000 doses of the two-shot vaccine have been administered so far, but demand exceeds supply. Little received his first shot earlier this week.

Similar to several other states, Idaho lawmakers are trying to rein in some of the governor's powers after Little declared an emergency in March and imposed health restrictions. They bristled at the pandemic rules, especially a lockdown and the designation of some people as “nonessential” workers.

Lawmakers also say they should have had a role in how to spend $1.25 billion in federal coronavirus relief money.

Nearly a dozen pieces of legislation have been put forward to end Little's emergency declaration and give the Legislature, not the governor, the power to extend declarations, among other things.

Some of the legislation appears to have stalled with the realization that ending the emergency declaration wouldn’t affect the health restrictions and could cost the state some $20 million in federal aid to help fight the virus and speed up vaccinations.

“The Idaho Legislature’s reckless and careless attempts to end the COVID-19 emergency declaration and weaken Idaho’s response in future emergencies puts this generation and future generations of Idahoans at risk," Simpson and Newcomb wrote in the letter released by Simpson's office.

Republican House Speaker Scott Bedke didn’t respond to a text from The Associated Press about the letter.

Lawmakers appear to have confused emergency declarations with health orders in some of the legislation, which Simpson and Newcomb pointed out.

“The COVID-19 emergency declarations are wholly separate from the public health orders," they wrote. The two actions are found in separate areas of Idaho law.

The bill “probably does neither of those things,” he told his fellow senators.

Another bill to give the Legislature the power to extend emergency declarations is awaiting a vote in the full House but has been delayed for several days.

Its sponsor, Republican House Assistant Majority Leader Jason Monks, said he was taking extra time to ensure the bill did what it's intended to do.

He said the Legislature was taking undeserved heat simply because it was following a process that makes its actions and debate public. He said he expected lawmakers to use their collective experience to get it right when legislation is passed.