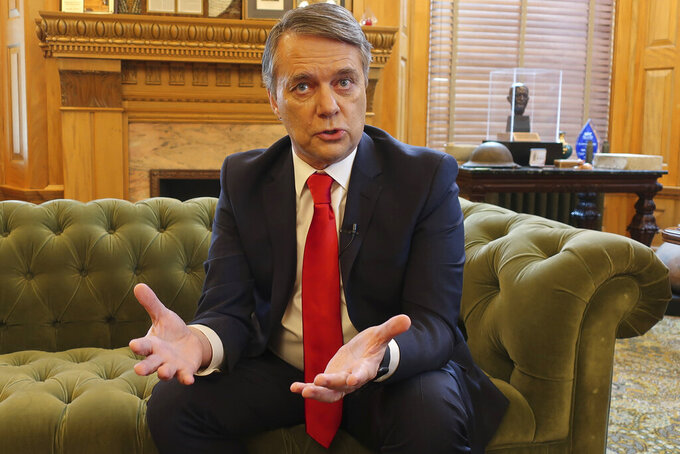 In this Dec. 20, 2018 file photo, then-Gov. Jeff Colyer answers questions during an Associated Press interview in his Statehouse office in Topeka, Kan. Colyer, who lost his 2018 Republican primary race, has signaled that he's planning to run for governor again in 2022 by appointing a campaign treasurer, a step required by law to raise money. (AP Photo/John Hanna)

TOPEKA, Kan. (AP) — Former Republican Gov. Jeff Colyer signaled Friday that he’ll make a comeback bid in 2022 by bringing a granddaughter of President Dwight Eisenhower onto his team for the Kansas governor's race.

Colyer stopped short of formally announcing his candidacy but described philanthropist Mary Eisenhower as joining “our campaign” as its treasurer. The announcement came on “Jeff Colyer Governor” letterhead and quoted Colyer as saying Kansas needs “an authentic, effective conservative.”

The path to the GOP nomination to challenge Democratic Gov. Laura Kelly is far from open. Many Republicans expect three-term state Attorney General Derek Schmidt to run, and Colyer’s last race was his narrow loss as governor in the August 2018 primary to conservative firebrand and then-Kansas Secretary of State Kris Kobach, who lost the general election to Kelly.

“Kansas made a mistake in 2018, and it’s time to fix that mistake,” Mary Eisenhower said in a statement.

State law requires a campaign to name a treasurer to raise money. Colyer never closed his campaign account but collected no contributions in 2019 or 2020 other than a few uncashed checks, its reports show.

Colyer was governor for a little less than a year after serving seven years as GOP Gov. Sam Brownback’s lieutenant governor. He rose to the higher office in January 2018, when Brownback resigned to become U.S. ambassador for international religious freedom under President Donald Trump.

Trump tweeted his endorsement of Kobach the day before the 2018 primary. Kobach, a nationally advocate for tough immigration laws, alienated moderate GOP and independent voters. Some Republicans argued later that Colyer would have fared better against Kelly.

She ran largely against Brownback’s legacy. His nationally notorious 2012-13 experiment in slashing income taxes was followed by persistent budget shortfalls until state lawmakers repealed most of the tax cuts in 2017.

Kelly's campaign on Friday dismissed Colyer's announcement, saying she is focused on the COVID-19 pandemic and improving the state's economy, "not on an election that’s two years away.”

Colyer is a reconstructive plastic surgeon and former state legislator from Overland Park.

Mary Eisenhower is a former CEO of People to People International, a Kansas City-based organization founded by her grandfather to provide international travel for students with the goal of promoting understanding.