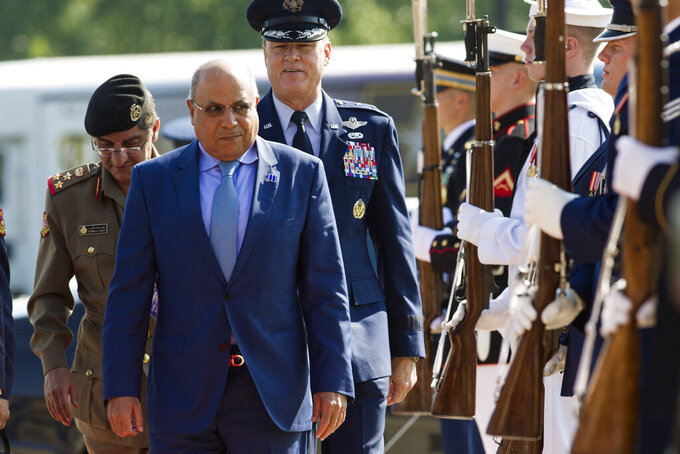 DUBAI, United Arab Emirates (AP) — Where is Sheikh Jaber? Kuwait was abuzz with the question as citizens on social media demanded to know the whereabouts of their 79-year-old former prime minister. He'd been ordered detained pending trial in an unprecedented move last month over the alleged embezzlement of millions of dollars from a military aid fund.

When the scandal involving the sheikh and another royal family member erupted into public view nearly two years ago, it unleashed a rare wave of street protests. It prompted the Cabinet's resignation and forced a reckoning in the Gulf Arab state about endemic corruption that has entrapped ministers and stained the country's sprawling bureaucracy for generations.

That may be changing, however, with recent explosive feuds over money laundering in Kuwait, a major corruption sweep in Saudi Arabia and last week's arrest of Qatar’s powerful finance minister in an embezzlement probe.

But Sheikh Jaber has not been spotted in public since the criminal prosecution began, and speculation has swirled about his fate. Many doubt the former prime minister is, in fact, languishing at the notorious prison on the dusty outskirts of Kuwait City riddled with reported coronavirus outbreaks.

That doubt reveals the deep-rooted distrust among Kuwaitis that authorities are pursuing the case in earnest. Social media has been ablaze in rumors in recent weeks even after the court accepted the defense team's request to ban news and social media from publishing details about the trial sessions.

Kuwaiti newspapers — still reporting despite the court order — said the defense team maintained the former prime minister's innocence during the most recent hearings. Sheikh Jaber’s legal team did not respond to repeated requests for comment amid the gag rule. Kuwait's Information Ministry declined to comment on the case, citing the court's secret investigation.

Soon, WhatsApp groups crackled with leaks that while other officials remained in detention, Sheikh Jaber's version of state custody was a special hospital wing decorated like a palace with hotel service. A doctor at Kuwait's state-run al-Amiri Hospital confirmed to The Associated Press that Sheikh Jaber, who skipped the last court session due to reported health problems, was receiving treatment there. The doctor declined to give details and spoke on condition of anonymity for fear of reprisals, like most people interviewed.

“It wouldn't be the first time,” a Kuwaiti anti-corruption activist said. “We are waiting and watching to see if this case ends up like the rest.”

The case of the missing military money is one of several scandals that have surfaced in Kuwait in recent years, damaging public confidence in its political establishment. Parliament has since shot down a public debt law that would raise billions of dollars for the government to solve its worst liquidity crisis since the 1991 Gulf War, in part over corruption fears.

In the fall of 2019, late defense minister Sheikh Nasser Sabah Al Sabah pressed for an investigation into the missing millions, triggering the downfall of the government when ministers refused to stand for questioning in parliament. Other schemes that later came to light have tainted Kuwait's reputation, including a massive scandal at Malaysia's state investment fund that ensnarled Sheikh Jaber’s son, now released on bail.

Under pressure, the government created a new Anti-Corruption Authority and a dozen similar committees. The late emir, Sheikh Sabah Al Ahmad Al Sabah, vowed on state TV at the time that “no one, no matter his position, will escape punishment if convicted for public fund-related crimes.”

Yet modest hopes for accountability have dimmed, with various investigations stagnating over the years. In the nation flush with petrodollars, critics describe a culture of corruption extending from everyday “wasta,” or political connections, to bloated public works projects. Lawmakers have blamed that on Kuwait falling behind neighbors like Dubai in terms of development and foreign investment.

“Much more needs to be done to resolve Kuwait’s problems. For one, the judicial system is in need of a major overhaul,” said Bader al-Saif, an assistant professor of history at Kuwait University. “Without all of the embezzled money returned and prison sentences given if those implicated are at fault, the corruption will continue."

Others more optimistic say the pre-trial detention of such powerful officials marks a pivotal moment in Kuwait's drive to root out graft — and note it already has borne fruit.

Earlier this month, a leaked court document revealed that Sheikh Jaber had paid back 53.9 million Kuwaiti dinars ($180.7 million) to the state, which prosecutors had accused him personally of misappropriating. A lawyer at the court confirmed the authenticity of the receipt, calling it an important precedent.

“Former officials at court in jail clothes is not something you see often here,” he said.