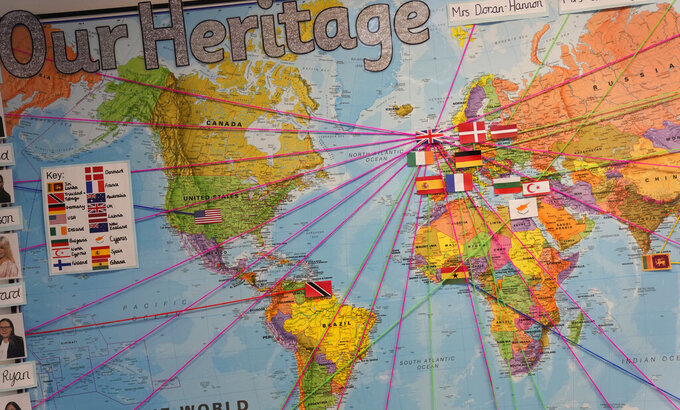 A world map showing the origins of members of staff at the Holy Family Catholic Primary School in Greenwich, London, Wednesday, May 19, 2021. Holy Family, like schools across Britain, is racing to offset the disruption caused by COVID-19, which has hit kids from low-income and ethnic minority families hardest.  (AP Photo/Alastair Grant)

LONDON (AP) — Britain risks failing hundreds of thousands of young people with its “half-hearted” effort to bolster schools after the COVID-19 pandemic, according to the former education recovery chief who resigned over the government’s funding announcement.

Kevan Collins criticized the 1.4 billion pound ($2 billion) education recovery fund that was announced Wednesday, describing it as a fraction of what is needed to meet the scale of the challenge.

“The package of support announced yesterday falls far short of what is needed,” Collins wrote Thursday in the Times of London. “It is too narrow, too small and will be delivered too slowly.”

Children across the U.K. lost an average of 115 days of classroom time during the pandemic, curtailing academic achievement and social development. Collins reportedly recommended that the government plow an extra 15 billion pounds into education over the next three years to help students catch up.

With the funding announced this week, Prime Minister Boris Johnson’s Conservative government has pledged about 3.1 billion pounds to the education recovery effort, or about 400 pounds ($566) per pupil. That’s in contrast to the U.S., which has allocated the equivalent of 1,600 pounds ($2,265) per student, or the Netherlands, which has announced plans to spend over 2,500 pounds ($3,540) per student.

“A half-hearted approach risks failing hundreds of thousands of pupils,” Collins wrote. “The support announced by government so far does not come close to meeting the scale of the challenge and is why I have no option but to resign.”

Central to Collins’ plan is a proposal to extend each school day an average of 30 minutes so children can get the extra academic help they need without sacrificing enrichment programs such as music and sports.

The government said it is still reviewing proposals to extend the school day and a decision will be made as part of the annual budget review. The spending announced this week includes 1 billion pounds to fund tutoring for disadvantaged students and 400 million pounds for teacher training.

“We’ve got to bring people with us on this policy development,” Victoria Atkins, a minister in the Home Office, told the BBC. “This is why we’re reviewing it.”

The implications of the debate are profound amid estimates that lost learning could cost children more than 100 billion pounds in lifetime earnings.

The impact is likely to be greatest on children from low-income and ethnic minority families.

Even before the pandemic, students from disadvantaged backgrounds were about 18 months behind their classmates by the end of secondary school. That gap will have widened over the past year, according to a report by the Education Policy Institute, which promotes equal access to education.

“In normal times, schools have a really important role to play in combating underlying inequalities in society,” said Luke Sibieta, one of the report’s authors. “And when we stop children being able to go to school normally, we kind of lose some of the benefit that schools play."

Follow all of AP’s global pandemic coverage at https://apnews.com/hub/coronavirus-pandemic