Expectations rise as Son reports for duty with South Korea 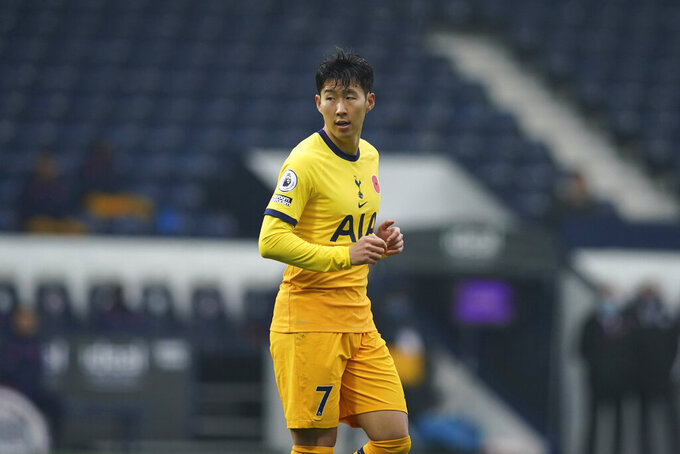 SEOUL, South Korea (AP) — Son Heung-min reports for national team duty for South Korea this week for the first time in 2020 as perhaps one of the hottest properties in the English Premier League.

Korean fans are expecting the forward to reproduce some of his stellar club form for South Korea in an international friendly against Mexico on Saturday in Austria.

The Tottenham Hotspur star is the equal leading scorer in England‘s top tier with eight goals in eight games so far this season. So impressive has the 28-year-old Son been that the English media suggests Spurs is ready to offer a new contract to take his reported weekly salary of 140,000 British pounds ($185,000) to around 200,000 British pounds ($264,000) until 2025 or 2026.

The South Korea captain has, however, scored just 26 goals in 87 appearances for his country and has sometimes cut a frustrated figure on the international stage.

South Korea head coach Paulo Bento explained when announcing the roster that it is difficult for Son to create the kind of understanding with his compatriots that he enjoys at club level with England captain Harry Kane — the pair have combined for 15 goals this season. The fact that the coronavirus outbreak has meant South Korea hasn't played for 12 months makes his job more difficult.

“On the national team, he doesn’t get enough time to get on the same page with his teammates,” Bento said. “I know many people are curious about what I think of him, and whether I think of him as a world-class player. He’s always a consummate professional on the national team. He’s humble, and all he cares about is trying to get better. I hope he’ll continue to contribute to our team.”

South Korea last faced Mexico at the 2018 World Cup when Son left the field in tears following a 2-1 defeat that left his team facing elimination.

“If we get caught up in trying to take revenge, it will only increase the possibility of losing the match at hand,” Bento said. “We have to stay focused on action on the field, and I’ll remind our players of that.”

The global pandemic means that South Korea is unable to play a full-strength team at home, because the likes of Son and Hwang Hee-chan of RB Leipzig would be subject to quarantine restrictions upon arrival in Seoul.

Instead, for the meeting with Mexico and, with Qatar four days later, Bento has called up seven European-based players, with the majority making the trip from Seoul.

Japan will also be in Austria, but has summoned a 23-man roster made up entirely of players based in Europe for Friday's game against Panama and against Mexico four days later.

“I want us to show persistence and tenacity out on the pitch,” Japan coach Hajime Moriyasu said. “I’m thankful to have such a strong squad available. We aim to win both games.”

Saudi Arabia is also in action for the first time this year with a double-header against Jamaica in Riyadh. Iran beat Bosnia-Herzegovina 2-0 in Sarajevo on Thursday.