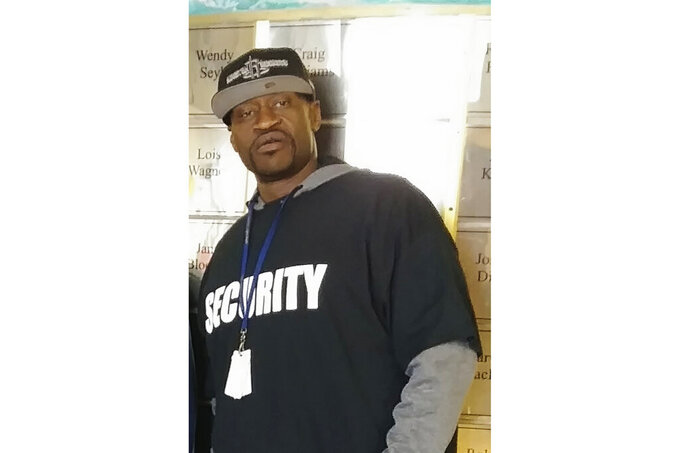 FILE - This undated file photo provided by Christopher Harris shows George Floyd. Floyd died May 25, after he was pinned to the pavement by a police officer who put his knee on the handcuffed black man's neck until he stopped breathing. (Christopher Harris via AP, File)

George Floyd had drugs in his system and severe heart disease when a Minneapolis police officer put a knee to his neck, but independent experts said the medical problems revealed in the full autopsy report don’t change the conclusion that the handcuffed man’s death was a homicide.

“He has some underlying conditions” that made it more likely he would not fare well under stress, said Dr. Gregory Davis, medical examiner for Jefferson County, Alabama, and a pathology professor at the University of Alabama at Birmingham. But the circumstances of Floyd’s May 25 death are not ignored in Wednesday’s report, which said “restraint and neck compression are part of why he died,” Davis said.

Dr. Stephen Nelson, chairman of Florida’s medical examiners commission, agreed. Even if someone with severe heart disease died of a heart attack during a purse-snatching, “we’d still call it a homicide,” he said.

“Is this stress associated with his interaction with law enforcement enough to put him over the edge? Yes, it is,” Nelson said.

Floyd’s death has sparked international protests about mistreatment of black people by police. Bystander video showed officer Derek Chauvin pressing his knee on Floyd’s neck, ignoring Floyd’s “I can’t breathe” cries and staying on him even after he stopped moving.

Minnesota Attorney General Keith Ellison on Wednesday upgraded charges against Chauvin to second-degree murder, and also charged the three other officers on the scene with aiding and abetting.

A lawyer for Floyd’s family earlier decried the official autopsy — as described in the original complaint against Chauvin — for ruling out asphyxia. An autopsy commissioned by the Floyd family concluded that he died of asphyxiation due to neck and back compression.

The experts who spoke with The Associated Press read the full government autopsy report but had no involvement with Floyd’s case.

Here are some of the key findings.

A previous statement by the examiner’s office says Floyd had “a cardiopulmonary arrest while being restrained” by police.

Cardiopulmonary arrest simply means his heart and breathing stopped, which happens when anyone dies.

“It’s really a meaningless term,” Nelson said. In Florida, directions printed on death certificates tell doctors not to use it and to be more precise and descriptive.

“I would use the word ‘traumatic asphyxia’ due to neck compression and restraint due to law enforcement subdual,” Nelson said. “I don’t think you can discount the video.”

“No life-threatening injuries identified,” the report says, although trauma to the face, elbows and hands, consistent with being handcuffed, are noted.

Finding no major bruising or damage to the muscles, cartilage or bones in the neck “doesn’t in any way mean that asphyxia didn’t occur,” just that there are no signs of that on the body, Davis said.

Several of Floyd’s key heart arteries were severely narrowed – evidence of serious heart disease. Several were 75% blocked and one was 90% blocked, and that was made worse by where the clogs occurred in terms of crimping the supply of blood to his heart, Nelson said. Blockages of 70% or more usually cause chest pain, he added.

“That degree of narrowing is sufficient to cause death,” Davis said.

Floyd also had an enlarged heart — “48% bigger than it ought to be” — likely from his high blood pressure and heart disease, Nelson said.

“A heart that’s enlarged like this is more likely to develop an abnormal heart rhythm,” Davis added.

The autopsy also found signs of tobacco use. Smoking is a big risk factor for heart disease and many other health problems.

The autopsy notes signs of fentanyl, methamphetamine and THC — the ingredient that produces marijuana’s high — in Floyd’s body.

Fentanyl is a potent synthetic opioid with heroin-like effects, said Bruce Goldberger, forensic medicine chief at the University of Florida College of Medicine.

“People who use it regularly or chronically develop tolerance to it,” and the amount reported in the autopsy could kill someone who has not used the drug in the past, Goldberger said.

However, “we don’t know what Mr. Floyd’s use of fentanyl was,” he stressed.

“I believe that the presence of these substances is not relevant,” Goldberger said. “We know his death is not due to toxicological means” because of the video of the circumstances, he said.

“I don’t believe that these drugs played a significant role in causing Mr. Floyd to become unresponsive while being restrained by law enforcement officers.”

The autopsy says Floyd tested positive for the new coronavirus on April 3 and that a nose swab during the autopsy found signs of the virus. Tests like these look for bits of genetic material and do not mean someone still has whole or viable virus.

It’s a concern for anyone who handled Floyd’s body, Nelson said.

“Potentially that body’s infectious,” although the autopsy found no signs of disease in Floyd’s lungs.

“He certainly doesn’t have pneumonia or any of the other typical signs that go along with COVID-19,” Nelson said. “The coronavirus had nothing to do with his death, that’s the important thing,”