EXPLAINER: Japan begins vaccination drive, but why so late? 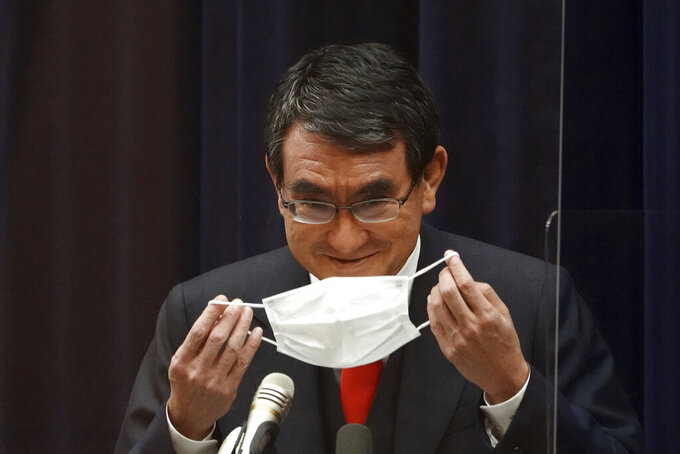 Japan’s Administrative Reform Minister Taro Kono, who is also in charge of COVID-19 vaccines, puts his mask back on after a news conference in Tokyo on Tuesday, Feb. 16, 2021, on inoculations. Japan rolls out its vaccination campaign Wednesday, Feb. 17, after the government gave belated first approval to a shot co-developed by Pfizer Inc. that the U.S. and many other countries started using two months ago. Kono defended the delay. “It was more important for the government to show the Japanese people that everything was done” to encourage taking the vaccines, he said. (AP Photo/Eugene Hoshiko)

TOKYO (AP) — Japan rolls out its COVID-19 vaccination campaign Wednesday after the government gave belated first approval to a shot co-developed by Pfizer Inc. that the U.S. and many other countries started using two months ago.

Some in Japan, where relatively rare side effects from vaccines tend to be played up, are in no hurry to get the shot. That reluctance could prove to be a big problem for the Tokyo Olympics scheduled for this summer after a year's delay. Vaccinations are considered a key to holding the games.

With domestic vaccine development still in its early stages, import-reliant Japan faces uncertainty in its supply. It's also unclear if the already-strained Japanese health care system will be able to treat the extra visitors during the games as they juggle local patients and the mass inoculations.

The AP looks at why Japan, the world's third-biggest economy, is so late in pursuing coronavirus vaccinations.

It's mostly because the government asked for clinical testing in Japan in addition to Pfizer's multinational tests, which did not include Japan.

Dozens of countries accepted the results of the Pfizer tests released in November and moved ahead. Pfizer applied for emergency approval in Japan in December, based on the overseas data, but Tokyo waited for results of Japanese tests submitted in late January before giving a green light on Sunday.

This all happened in two months, much faster that the one-year average that is usual for Japan, known for being cautious and bogged down in bureaucracy.

The approval process for another supplier, AstraZeneca, only started recently, while a third, Moderna Inc. hasn't applied yet in Japan.

WHY DID JAPAN ASK FOR MORE DATA?

People in Japan are often skeptical about vaccines, and officials felt they needed to address safety concerns thoroughly.

Health Minister Norihisa Tamura said last week that Asians comprised “only a small percent” of Pfizer tests, which were conducted from July to November on about 44,000 people in six countries.

Even so, that means the data included samples of about 2,000 Asians. Some critics are questioning whether the additional tests on only 160 Japanese people added anything — except more delay.

Taro Kono, administrative reform minister for vaccinations, defended the delay. “It was more important for the government to show the Japanese people that everything was done" to encourage taking the vaccines, he said.

WHY IS CONFIDENCE SO LOW IN JAPAN?

Japan’s mistrust of vaccines is decades old. Many people have a vague unease about vaccines, partly because their side effects have often been played up.

In the 1990s, the government scrapped mandatory vaccinations after a court ruling held it responsible for side effects linked to several of them.

More recently, Japan stopped recommending the human papillomavirus, or HPV, vaccine after media reports of alleged side effects, renewing worries despite the vaccine's widespread use overseas as safe and effective protection for cervical cancer.

A recent Mainichi newspaper survey showed that fewer than 40% of the respondents are eager to get their coronavirus shots right away, while about 60% said they will wait and see.

WHAT IS JAPAN'S VACCINATION TIMELINE?

About 40,000 front-line medical workers treating COVID-19 patients are slated to get their first shots of the Pfizer vaccine at 100 hospitals. Half of them will participate in a survey of side effects and subsequent health checks to try to ease public safety concern.

About 3.7 million other medical workers will be next. The elderly are expected to get their turn in April, ahead of those with underlying health issues.

It will be about June by the time those older than 16 will be eligible.

DOES JAPAN HAVE ENOUGH VACCINE?

Despite its late start, Japan was quick to strike deals with Pfizer and two other companies, AstraZeneca and Moderna, in July when the vaccines were still being developed.

Japan pledged to secure doses for its entire population by June, but the prospects are unsure amid shortages in Europe where much of Pfizer and AstraZeneca supplies are produced.

Taro Kono, the minister in charge of vaccinations, on Tuesday described the prospects of getting the vaccines in time as “difficult." Though he expressed optimism, he said supplies from Europe will determine the progress of the campaign in Japan.

IS JAPAN DEVELOPING ITS OWN VACCINES?

Several Japanese companies and research organizations are developing coronavirus vaccines, but they are in the early stages.

Only AstraZeneca is currently in the approval process.

Experts say vaccine development in Japan has become an unpopular research area because of risks, the time-consuming process and a lack of government funding.

Shigeru Omi, the head of the government coronavirus task force, has cited a lack of global competitiveness by Japanese pharmaceutical companies as a reason for the delayed rollout.