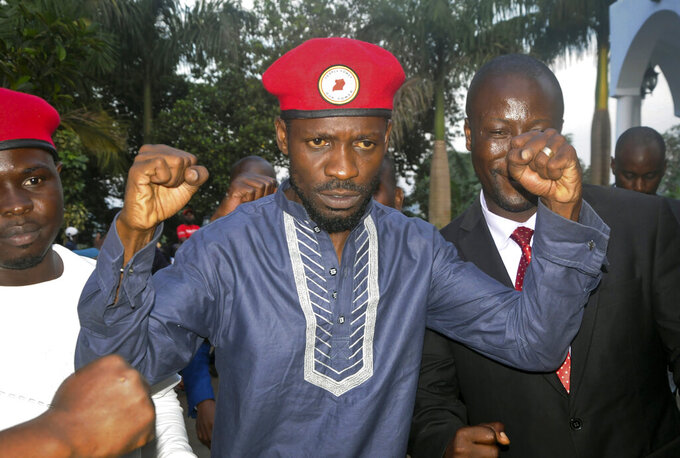 FILE - In this Thursday May 2, 2019 file photo, Ugandan pop star and opposition figure Bobi Wine, whose real name is Kyagulanyi Ssentamu, greets his followers as he arrives home after being released from prison, im Kampala. Deadly violence and repressive measures have alarmed observers as Uganda prepares to vote on Jan. 14, 2021, with longtime President Yoweri Museveni challenged by young singer and lawmaker Bobi Wine, who has captured the imagination of many across Africa in a generational clash (AP Photo/Ronald Kabuubi, file) 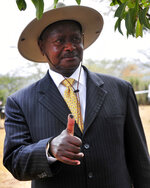 KAMPALA, Uganda (AP) — Deadly violence and repressive measures have alarmed observers as Uganda prepares to vote on Jan. 14, with longtime President Yoweri Museveni challenged by young singer and lawmaker Bobi Wine, who has captured the imagination of many across Africa in a generational clash.

Authorities have used the COVID-19 pandemic as a reason to ban rallies in urban areas where Wine has strong support, including the capital, Kampala. In recent days Wine has been arrested and blocked from staying in hotels while campaigning, and one bodyguard was killed. Wine, whose real name is Kyagulanyi Ssentamu, fears for his life as well.

Critics allege that Museveni, who successfully oversaw the removal of a constitutional age limit on the presidency, is taking advantage of the pandemic to militarize the election in which he almost certainly will be declared the winner. Here's what's at stake:

Museveni, a former rebel leader who took power in 1986 and brought stability after years of horrific upheaval, faces 10 challengers. His main opponent is Wine and his “People Power" movement that is so popular that authorities have banned its distinctive red beret. Wine has been detained many times on charges ranging from treason to violating virus restrictions, but he has never been convicted and supporters call his treatment politically motivated.

The 76-year-old Museveni, long a U.S. regional security ally, asserts a “popular mandate” in ordering security forces to crack down on people he calls criminals bent on undermining his government's authority. His campaign theme is “securing the future” of the East African nation of over 44 million people. At least 17 million are registered voters.

The 38-year-old Wine asserts that Museveni is part of the old guard that has presided over rampant corruption and dimmed the hopes of millions of jobless Ugandans. The country's population is one of the youngest in the world, with a median age under 18. Wine has urged Museveni to retire peacefully, saying he would guarantee his safety.

There has been no reliable polling ahead of the vote. Museveni is thought to enjoy solid support among older Ugandans in some rural areas, but Wine has surprised authorities by drawing huge crowds in rural areas and dispelling the idea that he represents only the urban poor.

VIOLENCE ON THE RISE

Although Uganda's recent elections have been marred by violence, it's more intense this time. Security forces have been deployed to break up opposition rallies, and at least 54 people were killed in November amid protests after one arrest of Wine in the country's worst unrest in years.

“Let Museveni know that we are not slaves and we shall not accept to be slaves,” Wine said at the time. “We shall be free.”

Fears are growing that violence will be even worse if the election results are disputed amid allegations of repression or fraud. A candidate must win more than 50% to avoid a runoff vote.

Museveni has accused Wine of being an agent of “outsiders, homosexuals and others who don’t like the stability and independence of Uganda.” That language is meant to hurt Wine in a country where homosexuality is illegal. Meanwhile, some officials point to international statements in support of Wine — and objecting to his treatment — as evidence of alleged collaboration with foreigners. He denies it.

Museveni has never groomed a credible successor to protect his legacy and keep the ruling party in power. This election is widely seen as his last chance to do so, possibly with his vice-presidential pick.

A win for Wine would shake up the long-established order. Many in Uganda believe that regime change is unlikely without the involvement of the military. In response to the November unrest, Museveni responded by changing the leadership of security forces.

The president's son, Lt. Gen. Muhoozi Kainerugaba, was named the commandant of Uganda's special forces, whose core role is to protect the president. And a military man whose last major assignment was to battle Islamic extremists in Somalia has been assigned to coordinate security forces in the capital during the election period.

Scrutiny of the vote faces challenges. The European Union is not deploying a team of observers, reportedly because of concerns about previous recommendations that have been ignored. Some journalists have been injured by police during opposition campaign events, and authorities are accused of trying to restrict reporting by requiring journalists to be accredited by a government agency.

The United States, Human Rights Watch and others have urged authorities to respect human rights. The U.S. Embassy has said group detentions and other abuses “are not the sign of security forces who care about democracy and the future of the Ugandan people.”

SOME CALL FOR NO ELECTION

Some dismayed Ugandans have called for the vote to be cancelled, questioning the point in a country where the president criticizes election officials and speaks with the confidence of a leader who believes he's not going anywhere.

Wine has said his party will try to protect the vote, including by deploying technology such as an app they say can track voting. They also will attempt to run a tally center whose results would be checked against official counting. That could lead to a confrontation with security forces, who previously have broken up attempts to track election results.