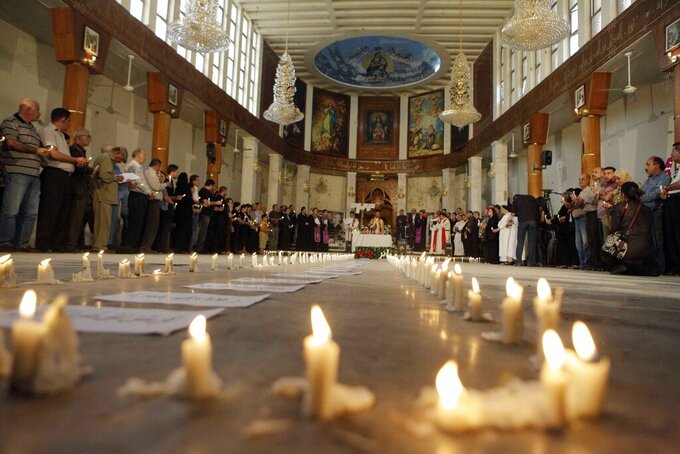 FILE - In this Nov. 7 2010, followers attend a mass at Our Lady of Salvation church in Baghdad, Iraq. Iraqi Christians have gathered for mass in the same church that just a week before was the scene of a horrific bloodbath that left scores dead and wounded. Pope Francis is pushing ahead with the first papal trip to Iraq despite rising coronavirus infections, hoping to encourage the country’s dwindling number of Christians who were violently persecuted during the Islamic State insurgency while seeking to boost ties with the Shiite Muslim world. (AP Photo/Khalid Mohammed)

VATICAN CITY (AP) — Pope Francis is pushing ahead with the first papal trip to Iraq despite rising coronavirus infections, hoping to encourage the country’s dwindling number of Christians who were violently persecuted during the Islamic State group's insurgency while seeking to boost ties with the Shiite Muslim world.

Security is a concern for the March 5-8 visit, given the continued presence of rogue Shiite militias. Francis, who relishes plunging into crowds and zipping around in his popemobile, is expected to travel in an armored car with a sizeable security detail. The Vatican hopes the measures will have the dual effect of protecting the pope while discouraging contagion-inducing crowds.

Francis’ visit is the culmination of two decades of efforts to bring a pope to the birthplace of Abraham, the prophet central to Christian, Muslim and Jewish faiths.

The trip will give Francis — and the world — a close-up look at the devastation wrought by the 2014-2017 IS reign, which destroyed hundreds of Christian-owned homes and churches in the north, and sent tens of thousands of Iraqi Christians and other religious minorities fleeing.

The trip will include a private meeting with Iraq’s top Shiite cleric, Grand Ayatollah Ali al-Sistani, a revered figure in Iraq and beyond.

WHAT IS THE VIRUS SITUATION IN IRAQ?

The trip marks Francis’ return to international travel since the coronavirus pandemic erupted, and it comes as Iraq is seeing a resurgence of infections, with daily new cases nearing the height of its first wave.

For months, Francis has eschewed even small, socially distanced public audiences at the Vatican, raising questions about why he would expose Iraqis to the risk of possible infection. Francis, the Vatican delegation and traveling media have been vaccinated, but few ordinary Iraqis have been given shots.

The Vatican has defended the visit, insisting that it has been designed to limit crowds and that health measures will be enforced. But even then, 10,000 tickets have been prepared for the pope's final event, an outdoor Mass at the sports stadium in Irbil.

Spokesman Matteo Bruni said the important thing is that Iraqis will be able to watch Francis on TV and “know that the pope is there for them, bringing a message that it is possible to hope even in situations that are most complicated.”

He acknowledged there might be consequences to the visit, but said the Vatican measured the risks against the need for Iraqis to feel the pope's “act of love."

HOW WILL PERSECUTED CHRISTIANS REACT TO POPE'S INTERFAITH MESSAGE?

Before IS seized vast swaths of northern Iraq, the Rev. Karam Shamasha ministered to 1,450 families in his hometown of Telskuf, 20 miles (about 30 kilometers) north of Mosul. Today, the families of his Chaldean Catholic parish number 500, evidence of the massive exodus of Christians who fled the extremists and never returned.

Shamasha says Francis will be welcomed by those who stayed, even though his message of interfaith harmony is sometimes difficult for Iraqi Christians to hear. They faced decades of discrimination and envy by the Muslim majority well before IS.

“The first ones who came to rob our houses were our (Muslim) neighbors,” Shamasha told reporters ahead of the trip. Even before IS, when a Christian family built a new house, Muslim neighbors would sometime say “‘Good, good, because you’re building a house for us’ because they know or believe that in the end, Christians will disappear from this land and the houses will be theirs," he said.

Francis is going to Iraq precisely to encourage these Christians to persevere and remain, and to emphasize that they have an important role to play in rebuilding Iraq. Estimates vary, but Iraqi Christians were believed to number around 1.4 million in 2003. Today there are ABOUT 250,000 left.

On his first day in Baghdad, Francis will meet with priests, seminarians and nuns in the same cathedral where Islamic militants in 2010 slaughtered 58 people in what was the deadliest assault targeting Christians since the 2003 U.S.-led invasion.

On Francis’ final full day in Iraq, he will pray in a Mosul square surrounded by four destroyed churches, and visit another church in the Christian city of Qaraqosh that has been rebuilt in a sign of hope for Christianity's future there.

WHY WILL FRANCIS MEET WITH GRAND AYATOLLAH?

One of the highlights of the trip is Francis’ meeting with al-Sistani, the grand ayatollah whose 2014 fatwah calling on able-bodied men to fight IS swelled the ranks of Shiite militias that helped defeat the group.

There are no plans to add the 91-year-old al-Sistani's signature to the document. But the fact that the meeting is happening at all is enormously significant, said Gabriel Said Reynolds, professor of Islamic studies and theology at the University of Notre Dame.

“It’s hard not to see this as accompanying his relationship with Ahmed el-Tayeb,” Reynolds said, noting al-Sistani's place as a revered figure of religious, political and intellectual influence in Iraq and beyond.

“I think there would be a lot for them to speak about," he said.

WHAT ARE THE SECURITY CONCERNS?

Security concerns were an issue well before twin suicide bombings claimed by IS ripped through a Baghdad market Jan. 21, killing at least 32 people.

They have only increased after a spate of recent rocket attacks, including at least 10 Wednesday, resumed targeting the American presence in the country, attacks the U.S. has blamed on Iran-aligned Shiite militias.

Asked if this 33rd foreign visit was the riskiest Francis has taken, Bruni replied diplomatically.

“I wouldn’t get into a competition of riskiest journeys, but I would say this is certainly one of the most interesting.”