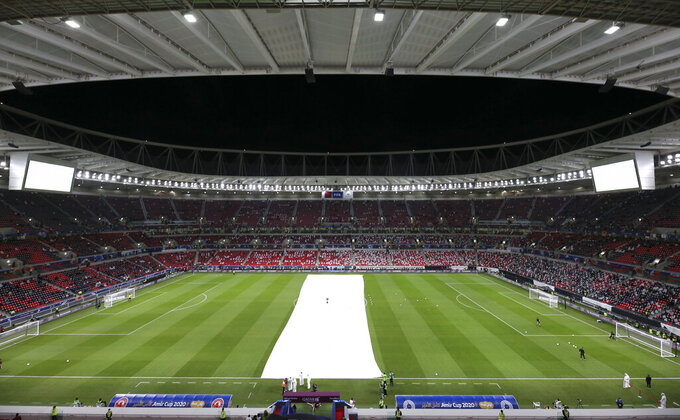 FILE - This Thursday, Dec. 18, 2020 file photo shows a general view of the Al Rayyan stadium during the opening ceremony in Al Rayyan, Qatar. A look at the state of play in Qatar's preparations for the 2022 World Cup amid ongoing criticism of the host nation as qualifying in Europe begins. (AP Photo/Hussein Sayed, file)

As European teams set out on their paths to the 2022 World Cup, scrutiny of Qatar is far from subsiding.

Criticism is intensifying as teams come under pressure from activists and fans to register disapproval of discriminatory laws and conditions for the migrant workers preparing the Gulf nation for kickoff on Nov. 21 next year.

Just this week, FIFA President Gianni Infantino received a letter from Amnesty International recognizing Qatar’s recent progress in improving worker rights since being awarded the World Cup in a 2010 vote but asking for enforcement of those changes to be prioritized.

Qatar says it on track to complete all eight stadiums by the start of 2022 after spending tens of billions of dollars upgrading infrastructure in the tiny, gas-rich nation. Half the venues are already open.

No country has announced plans to boycott the tournament, although Norway, which features Borussia Dortmund star Erling Haaland, is facing calls to do so from some top division clubs, including Rosenborg and Tromso.

Norway coach Stale Solbakken has indicated his players will use their first qualifier — against Gibraltar on Wednesday — to register concerns about human rights abuses in Qatar.

"The word dialogue is very vague and very cowardly. There must be pressure. Direct measures must be taken to make things better," Solbakken told Norwegian broadcaster TV2. “We can do things that the world might see. Sports can send signals.”

In the Netherlands, stand-in captain Georginio Wijnaldum cautioned Tuesday against linking anti-racism campaigns with moves to reduce discrimination in Qatar against workers from south Asia.

“It is not that we have chosen to play football in Qatar ourselves,” said Wijnaldum, who won the Club World Cup in Qatar with Liverpool in 2019.

The Dutch football federation (KNVB) said it was “absolutely appalling” to see that more than 6,500 migrant workers in Qatar from India, Pakistan, Nepal, Bangladesh and Sri Lanka have died in the last decade, according to research by The Guardian newspaper.

“The KNVB has never been in favor of holding the World Cup in Qatar and of course certainly doesn’t approve of the way in which migrant workers are treated there,” the federation said.

Qatar only provides details of the deaths of stadium workers, saying there have been 38, of which three have been work-related. One of those came on the site of the Khalifa International Stadium, where British worker Zac Cox was found by a British coroner to have fallen from a suspended walkway due to dangerous working conditions.

FIFA and Qatar have declined requests to release details from the inquiry into the 2017 death and how the failings were addressed.

Preparing for the World Cup is about a lot more than building the stadiums, with roads, a Metro system and hotels to be constructed — often in the fierce heat that led to the tournament being shifted from FIFA's usual June-July slot. The Qatari government provides no data on fatalities, nor are there the type of open death inquests like the one eventually conducted back in Britain on Cox.

Projects under the auspices of the World Cup were quicker to improve living and building conditions for migrant workers after pressure from rights groups, which also highlighted excessive working hours, unpaid wages and restrictions on freedom of movement.

Amnesty this week welcomed "a number of positive reforms” introduced, but also said reforms are “often not properly implemented, and thousands of migrant workers are still exploited and abused.” The rights group claims Qatar’s advisory body, the Shura Council, is seeking to re-impose restrictions on workers’ rights to change jobs or leave Qatar.

The Qatari government said those changes were staying along with introducing, from Saturday, a non-discriminatory minimum wage.

The only one of the 32 countries to have secured its place at the finals is the one making its World Cup debut: Qatar, thanks to its status as host. The Asian champions will be gaining crucial match experience after being paired to play friendlies against the teams in the European qualifying group containing European champion Portugal.

Because of the coronavirus pandemic, the last region to start qualifying will be Oceania to determine which nation plays an intercontinental playoff to try to secure a place at the finals.

Qualifying in South America began last year but is on hold due to travel restrictions. Like Europe, qualifying is beginning this week in the CONCACAF region which includes North America. In Asia, some teams are resuming qualifying this week.

The main group stage in African qualifying is due to start in June.

Qatar has been the target of allegations of wrongdoing over how it convinced FIFA voters in 2010 to award it the World Cup. FIFA’s own corruption investigation found no evidence it said warranted stripping Qatar of the hosting rights. But fresh claims emerged only last year when American prosecutors alleged bribes were paid to FIFA executive committee members to gain their votes for Qatar. FIFA has never opened an investigation to examine those specific allegations.

Even before the pandemic, FIFA took out insurance coverage of $900 million to protect against the potential cancellation, postponement or relocation of the World Cup. FIFA hopes the roll-out of vaccines for COVID-19 can ensure full stadiums and a regular World Cup.

Fewer sponsor slots have been sold compared with the same stage before previous editions of the men’s tournament, although FIFA is budgeting to generate $1.35 billion from commercial rights as part of an overall World Cup revenue of $4.67 billion. In the 2019-2022 World Cup cycle, FIFA is projecting revenue of $6.44 billion, slightly up from the previous four-year period including the tournament in Russia.