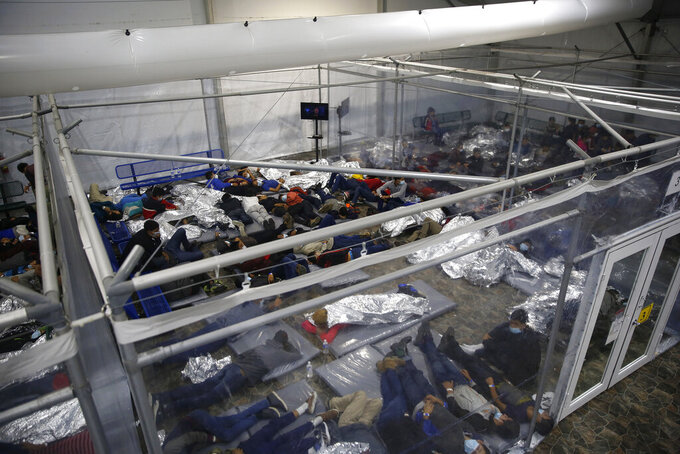 Minor children are housed inside a pod at the Donna Department of Homeland Security holding facility, the main detention center for unaccompanied children in the Rio Grande Valley run by U.S. Customs and Border Protection (CBP), in Donna, Texas, Tuesday, March 30, 2021. The minors are housed by the hundreds in eight pods that are about 3,200 square feet in size. Many of the pods had more than 500 children in them. The Biden administration on Tuesday for the first time allowed journalists inside its main detention facility at the border for migrant children, revealing a severely overcrowded tent structure where more than 4,000 kids and families were crammed into pods and the youngest kept in a large play pen with mats on the floor for sleeping.(AP Photo/Dario Lopez-Mills, Pool)

DONNA, Texas (AP) — The Biden administration's decision this week to allow journalists to see Customs and Border Protection's main holding center for unaccompanied migrant children answered some questions about the conditions they are being held in but raised others. Here are some of the takeaways from Tuesday's visit to the facility in Donna, Texas, by The Associated Press and CBS.

It would be impossible to compare the conditions of children migrants being held now with previous years without unfettered access to facilities, which hasn't happened under any administration.

What's clear is that the Donna facility, which opened Feb. 9, is tremendously overcrowded. It was holding more than 4,100 migrants on Tuesday in space designed for only 250 under federal guidelines to contain the spread of COVID-19. More than 3,400 were unaccompanied children and the rest were parents and their children.

Rooms walled with plastic partitions and designed for 32 children held more than 500 on Tuesday. Children sat on mats with foil blankets, chatting quietly. Doors to the rooms were open but children had no space to roam around or play games. A room for children ages 3 to 9 allowed for more movement in a walled playpen. An 11-year-old boy cared for his 3-year-old sister, while a 17-year-old mother watched after her newborn.

In 2018, the Associated Press toured the main holding center in McAllen, Texas, with other news organizations and found dozens of men crammed into cells with windows to a processing area. Children were held behind chain-link fences.

In 2019, the Department of Homeland Security's internal watchdog published reports with shocking descriptions and photos of conditions. A cell for 35 men held 155, with space was so tight that it was standing-room only and some stood on toilets to breathe. Follow-up visits also describe extreme overcrowding. In 2014, photos of a holding center in Nogales, Arizona, showed children behind chain-link fences did not show the same level of overcrowding.

CAN U.S. AUTHORITIES KEEP UP?

CBP is supposed to transfer unaccompanied children to the Health and Human Services Department for placement with a sponsor in the United States, often parents or a close relative. Families are generally not to be held more than 20 days under a court order but Immigration and Customs Enforcement, which takes custody from CBP, has little space to hold them.

HHS has added more than 16,000 beds for unaccompanied children in the last month. The agency is rushing to staff them with contractors and volunteers, waiving FBI fingerprint background checks normally required of caregivers in the system. While considered more suitable for children than the Donna tent, the emergency intake sites are being opened rapidly, without being licensed by the states where they’re located.

As of last week, the Border Patrol was encountering an average of 5,000 people a day over the previous 30 days, an unusually high number. There is often an increase in spring that tapers off in the summer. Even if that pattern holds, the question remains: will there be enough space?

ICE is preparing to hold families in hotels — two in the El Paso, Texas, area and one in Arizona — under a contract announced last week with Endeavors Inc., according to a U.S. official who spoke on condition of anonymity because details have not been made public. On Wednesday, a private Christian camp in New Mexico said it was in discussions with the government about housing migrants.

At Donna, about 14% of children have tested positive before being transferred to HHS, which eventually places them with family or other sponsors, according to Border Patrol officials. Those children were asymptomatic and would have been tested earlier if they exhibited warning signs, officials said.

HHS isolates children who have tested positive and does not release them before they clear of the virus. Parents and children detained at Donna are tested for the virus by nonprofit groups or officials in border cities once they're released. Families who test positive or have close contact with someone who has the virus are directed not to board buses or planes until they clear.

Still, it's impossible to say how much the virus is spreading inside Donna. CBP does not test everyone in the tent facility regularly. While migrants are issued masks to wear, there is next to no room for social distancing.

The Biden administration let journalists tour the Donna facility for the first time Tuesday, with permission for photos and video to be shot. That access came after months of pressure by news organizations to be allowed access. CBP said the pandemic had forced limits on how many journalists could participate.

The administration has not allowed journalists to view a holding area under an international bridge in Mission, Texas, and has avoided ride-alongs with Border Patrol agents. HHS has not allowed reporters into any of the emergency sites across the Southwest to take children from CBP.

By comparison, in 2018 the Trump administration allowed reporters to tour its main holding facility in McAllen, Texas, but did not allow journalists to take photos or video. It provided its own images instead. In the Obama administration, an AP photographer toured an Arizona facility for children in 2014 and distributed those images under a pool arrangement.