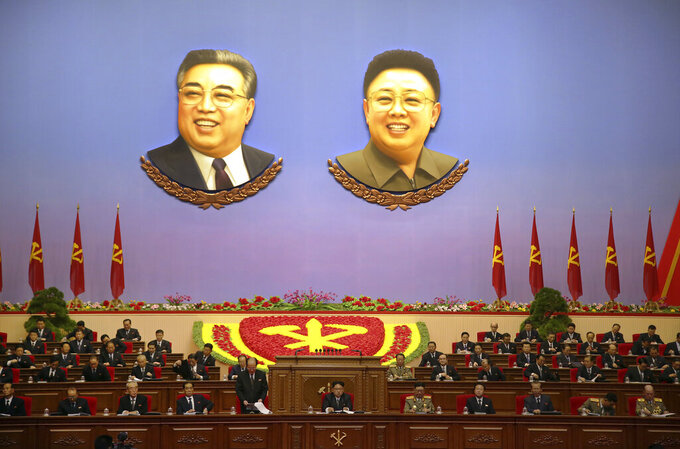 FILE - In this May 9, 2016, file photo, the portraits of late North Korean leaders Kim Il Sung, left, and Kim Jong Il hang inside the convention hall of the April 25 House of Culture where the party congress is held in Pyongyang, North Korea. North Korea has opened its biggest political event in five years amid what some experts see as the most fraught moment of leader Kim Jong Un’s nine-year rule. (AP Photo/Wong Maye-E, File)

SEOUL, South Korea (AP) — North Korea has opened the first full congress of its ruling party in five years, with leader Kim Jong Un admitting his previous economic development plans have failed. The congress could be crucial, coming as it does amid what some experts see as the most fraught moment of Kim's nine-year rule.

The Workers' Party congress, which was revived by Kim in 2016 after a 36-year hiatus, began on Tuesday as North Korea, one of the world’s poorest countries, faces what Kim has called “huge challenges and difficulties” brought on by an economy hammered by pandemic-related border closings, a spate of natural disasters and harsh U.S.-led sanctions meant to stop the country from putting the finishing touches on its illicit nuclear-tipped missile program.

The meeting will also be closely watched by, and may be meant to send a message to, US. President-elect Joe Biden, who will be inaugurated later this month. Biden has called Kim a “thug” and criticized his nuclear summitry with President Donald Trump.

Here are a few things to know about the biggest political event of the year in North Korea:

The congress is the top decision-making organ of the Workers’ Party.

Kim, the party chairman, determines key day-to-day decisions together with members of his inner circle, but the congress’ responsibilities include the formulation of new policies, reviews of past projects, revisions of party regulations and a reshuffling of officials’ positions.

This year’s congress is the eighth since Kim’s grandfather, Kim Il Sung, held the first one in 1945. Kim Il Sung had six congresses before he died in 1994. His son, Kim Jong Il, who died in 2011, never held a congress. Some experts say Kim Jong Il’s “military-first” policy helped undermine the influence of the Workers’ Party during his 17-year rule.

Kim Jong Un revived the congress in 2016 as part of his efforts to increase the party’s authority and cement his grip on power. It was the first congress since 1980, four years before he was born. Kim turns 37 on Friday.

WHY HOLD IT NOW?

Past party rules required North Korea to hold a congress every five years, but revised guidelines in 2010 don’t specify how often it should be convened. Some experts say Kim needs a big state meeting like this to lay out a new vision for the nation and to strengthen public loyalty at a difficult time in his rule.

North Korea’s yearlong closure of its borders to guard against COVID-19 saw its trade volume plummet with China, its biggest trading partner, by about 80% in the first 11 months of 2020. Typhoons and floods last summer destroyed crops, houses and infrastructure across North Korea. Pyongyang has said that persistent U.S.-led sanctions against its nuclear bomb program are meant to “strangle and stifle” the country.

During a public speech marking the party’s 75th anniversary in October, Kim fought back with tears as he thanked his people for enduring the triple blow to the economy.

“On this planet at present, our country is the only one that is faced with (such) huge challenges and difficulties, like dealing with the anti-epidemic emergency and recovering from the catastrophic natural disasters, when everything is in short supply owing to the harsh and prolonged sanctions,” Kim said.

North Korea, which has a broken medical infrastructure and deep poverty, has taken some of the world’s toughest anti-virus measures, and claims to be coronavirus-free, an assertion widely disputed by foreign experts.

Experts also say that Kim shares a high level of responsibility for the economic woes. Kim has repeatedly told his people that nuclear weapons are a “powerful treasured sword” that are needed because of persistent U.S. hostility. But a string of high-profile weapons tests in past years aimed at acquiring the ability to launch precision nuclear strikes on the American homeland have led to tougher U.S.-led sanctions that experts say are gradually drying up North Korea’s foreign currency reserves.

During this month’s congress, North Korea has said it will announce new economic developmental goals for the next five years.

State media said Wednesday the congress' gathering is meant to “discuss and decide on a fresh line of struggle and strategic and tactical policies for making a radical leap forward in the development of the party and socialist construction.” An earlier Workers’ Party statement said its previous “goals for improving the national economy have been seriously delayed.”

Some observers say North Korea may be forced to aim for modest objectives from this congress because it must continue to focus against the coronavirus. Others says North Korea, which recently completed an 80-day “productivity campaign,” might call for more such campaigns to squeeze its people for increased labor.

During several speeches expected at the congress, Kim will likely repeat his commitment to his nuclear development program but may signal a willingness to engage with the incoming Biden administration and rival South Korea. Kim’s state media, which previously called Biden “a rabid dog,” have remained silent over the next U.S. president’s election victory.

Other possible moves at the congress include Kim getting a new high-profile position, such as “generalissimo,” a title held by his late father and grandfather; his influential sister, Kim Yo Jong, may also be appointed a member of the powerful Politburo in a bid to reinforce the Kim family’s rule, experts say.