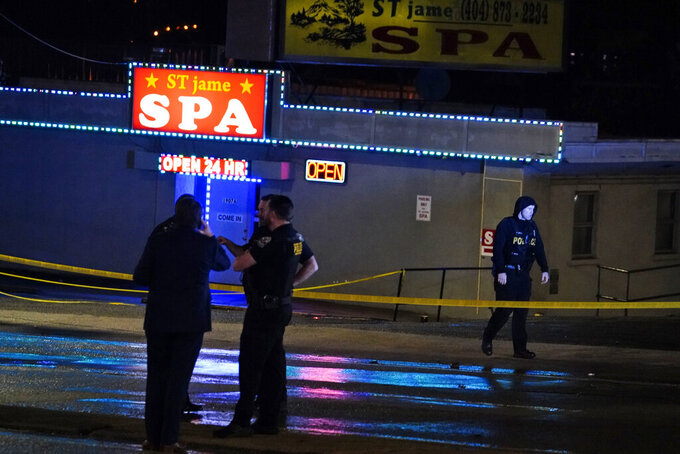 Law enforcement officials confer outside a massage parlor following a shooting on Tuesday, March 16, 2021, in Atlanta. Shootings at two massage parlors in Atlanta and one in the suburbs have left multiple people dead, many of them women of Asian descent, authorities said Tuesday. (AP Photo/Brynn Anderson)

CHICAGO (AP) — The shootings at three Georgia massage parlors and spas that left eight people dead, six of them women of Asian descent, come on the heels of a recent wave of attacks against Asian Americans since the coronavirus entered the United States.

As details emerge, many members of the Asian American community see the Georgia killings as a haunting reminder of harassment and assaults that have been occurring from coast to coast.

WHAT HAPPENED IN ATLANTA?

Five people were shot Tuesday at a massage parlor about 30 miles (50 kilometers) north of Atlanta, four of whom died. Police found three women shot to death at Gold Spa in Atlanta, and another woman dead at Aromatherapy Spa across the street.

South Korea's Foreign Ministry said in a statement Wednesday that its diplomats have confirmed that four of the victims who died were women of Korean descent.

A 21-year-old white man, Robert Aaron Long, suspected in the shooting has been taken into custody and charged with murder.

IS THERE A MOTIVE?

As many raised concerns that the shootings are the latest in a string of hate crimes against Asian Americans, police suggested the suspect may have had other motives.

Long told police the attack was not racially motivated. He claimed to have a “sex addiction,” and authorities said he apparently lashed out at what he saw as sources of temptation.

But those statements spurred outrage and widespread skepticism given the locations and that most of the victims were women of Asian descent.

HOW HAVE SOME ASIAN AMERICANS RESPONDED?

Asian American lawmakers have expressed heartbreak on social media and emphasized the need to support Asian American communities during this moment. The official Twitter account of the Congressional Asian Pacific American Caucus wrote that its members are “horrified by the news ... at a time when we're already seeing a spike in anti-Asian violence."

Many lawmakers acknowledged a heightened sense of fear among Asian Americans as a result of the increasing number of hate incidents.

Rep. Judy Chu of California reminded people of the effect of anti-Asian rhetoric.

“As we wait for more details to emerge, I ask everyone to remember that hurtful words and rhetoric have real life consequences,” she wrote on Twitter. “Please stand up, condemn this violence, and help us #StopAsianHate.”

HOW PREVALENT HAVE ASSAULTS AGAINST ASIAN AMERICANS BEEN?

Recent attacks, including the killing of an 84-year-old San Francisco man in February, have raised concerns about worsening hostilities toward Asian Americans. Nearly 3,800 incidents have been reported to Stop AAPI Hate, a California-based reporting center for Asian Americans and Pacific Islanders, and its partner advocacy groups, since March 2020. Nationally, women reported more than double the number of hate incidents compared with men.

Police in several major cities saw a sharp uptick in Asian-targeted hate crimes between 2019 and 2020, according to data collected by the Center for the Study of Hate & Extremism at California State University, San Bernardino. New York City went from three incidents to 27, Los Angeles from seven to 15, and Denver had three incidents in 2020 — the first reported there in six years.

HOW FAR BACK DOES ANTI-ASIAN RACISM GO IN THE UNITED STATES?

Racism against Asian Americans has long been an ugly thread of U.S. history and was enshrined into law in the Chinese Exclusion Act of 1882, which was designed to prevent Chinese American laborers from entering the U.S. as a result of widespread xenophobia.

Asian Americans have also long been used as medical scapegoats in the U.S. and falsely blamed for public health problems, including a smallpox outbreak in San Francisco in the 1870s. This racist association between Asian Americans and illness and uncleanliness has also affected views of Asian food and contributes to the “perpetual foreigner” trope that suggests Asian people are fundamentally outsiders.

This fueled suspicions of Japanese Americans during World War II, when many were sent to detention camps solely due to their ethnicity, as well as Islamophobia and prejudice toward Muslim and South Asian Americans following the 9/11 terrorist attacks.

In 1982, 100 years after the Chinese Exclusion Act, a 27-year-old Chinese American, Vincent Chin, died after being attacked in Detroit because of his race. At the time, a growing Japanese auto industry was leading to major job losses in the city’s auto sector. His killers, two autoworkers, mistook him for Japanese, using racial slurs as they beat him outside a club where he was celebrating his bachelor party. His death led to protests from Asian Americans nationwide.

WHAT ARE POLITICIANS DOING ABOUT THE RECENT UPTICK?

President Joe Biden signed an executive order in January condemning anti-Asian xenophobia in response to the COVID-19 pandemic. The directive acknowledges the role rhetoric from politicians, including the use of derogatory names for the coronavirus, has played in the rise of anti-Asian sentiment and hate incidents targeting Asian Americans. Former President Donald Trump, for example, has repeatedly used racial terms to describe the virus, including during a Tuesday night interview with Fox News.

The rash of attacks in the past two months has renewed attention from politicians, including California Gov. Gavin Newsom, who signed legislation allocating $1.4 million to Stop AAPI Hate and the UCLA Asian American Studies Center for community resources and tracking of anti-Asian hate incidents.

Initiatives such as increased police presence, volunteer patrols and special crime hot lines have also been suggested by local officials and citizens, with big-name brands like the NBA's Golden State Warriors and Apple, based in the Bay Area, promising to donate to the cause.

Tang reported from Phoenix. Fernando and Tang are members of the AP’s Race and Ethnicity team.