EXPLAINER: Why Senegal protesters are clashing with police 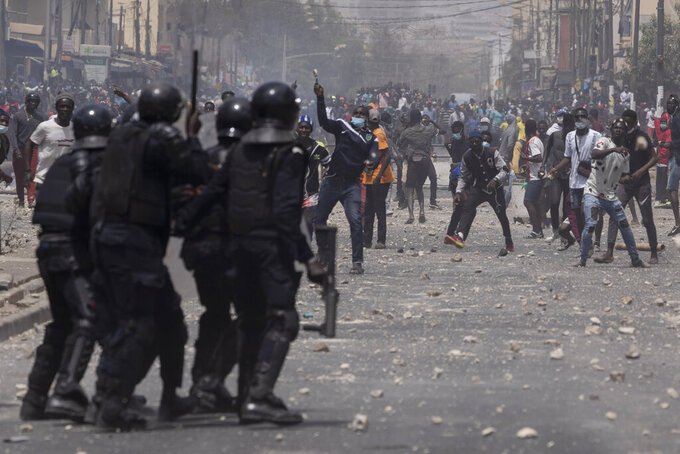 FILE - In this March 5, 2021 file photo, demonstrators throw rocks at riot policemen during protests against the arrest of opposition leader and former presidential candidate Ousmane Sonko in Dakar, Senegal. Deadly protests have erupted over the past week in the West African nation of Senegal, long considered a bastion of democracy and a regional leader on diplomacy issues. (AP Photo/Leo Correa, file)

DAKAR, Senegal (AP) — Deadly protests have erupted over the past week in the West African nation of Senegal, long considered a bastion of democracy and a regional leader on diplomacy issues. Anti-government protesters have set supermarkets ablaze and lobbed rocks at riot police in a rare display of violence on the streets of the capital, Dakar.

Here is a look at the unrest so far and what's expected in the coming days:

WHO IS OUSMANE SONKO AND WHY WAS HE JAILED?

Ousmane Sonko, 46, is an opposition politician who rose to prominence during the 2019 presidential election. He received just over 15% of the vote, finishing third, but his speeches condemning government corruption and poverty struck a chord with many Senegalese. Given his young age and skills as an orator, observers said it likely would not be his last run for president.

Last week he was ordered to make a court appearance for questioning on accusations of rape. But on his way to the courthouse Wednesday, he was arrested for disturbing public order after hundreds of his supporters clashed with police who were trying to stop unauthorized protests. On Monday, he was released from police custody after being charged with rape and making death threats.

IS THIS REALLY ABOUT THE RAPE CASE?

Sonko's supporters say Senegalese President Macky Sall is trying to derail the opposition leader's political future. If Sonko is convicted, he faces up to 10 years in jail and would be barred from taking part in the 2024 election. Critics note it's not the first time a perceived opponent of the president has faced criminal charges ahead of national elections.

In 2013, the son of former President Abdoulaye Wade was charged with corruption. Karim Wade, who many thought would one day run for the presidency too, ultimately served three years in jail before going into exile in Qatar. In 2017, Dakar Mayor Khalifa Sall was arrested on corruption charges and not pardoned until after the 2019 election had taken place.

SO WHY ARE PROTESTERS SETTING SHOPS ON FIRE?

The protesters see Sonko's arrest as just one example of corruption in a government beset by greed. They have targeted French retailers whom they believe have profited at a time when many Senegalese are suffering from the global economic downturn brought on by the COVID-19 pandemic. The Auchan chain has been particularly targeted because it already was being blamed for putting smaller merchants out of business since it opened stores across Senegal back in 2019.

HOW HAS SENEGAL'S PRESIDENT RESPONDED?

Sall went on national television late Monday, six days after the protesters first began demonstrating. He acknowledged the financial pain many Senegalese are experiencing and agreed to trim the nightly curfew by three hours. Yet he cautioned demonstrators against continuing to foment unrest, saying: “When you ransack a business you don’t create jobs, you destroy them.”

WHAT'S GOING TO HAPPEN NEXT?

Sonko's supporters initially took to the streets to protest his arrest. Now that he has been granted conditional release pending trial, organizers have officially canceled further protests for now. However, some vowed Monday to press ahead until all the people arrested in connection with the unrest are released. For his part, Sonko is calling for an investigation into allegations of police brutality during the deadly violence. Amnesty International says at least eight people were killed during the unrest.

Sonko, though, has made clear that despite his disdain for Sall the goal is not to unseat the president. Sall was democratically re-elected in 2019 with more than 58% percent of the vote and Sonko told his supporters on Monday that “we don’t want to take responsibility for undermining our democracy.”

Sonko also has called on the president to publicly reject the idea of running for president again in 2024. While Sall will have already served two terms in office, critics fear he could amend the rules so that a third run is possible as leaders in a number of other African countries have done. Sall has not commented publicly on his future plans and did not do so in his televised speech Monday night.