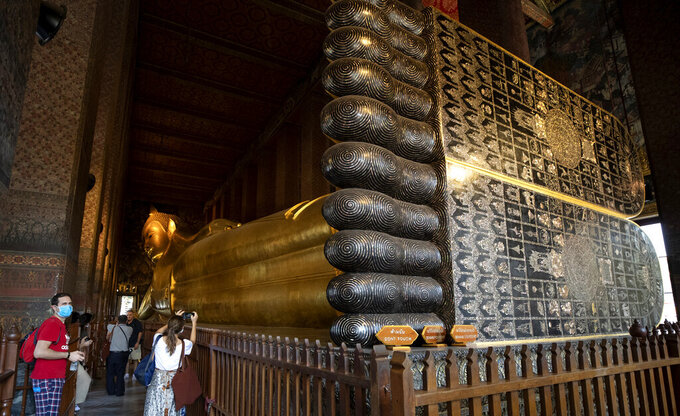 In this Friday, March 13, 2020, photo, tourists take a photograph with the statue of a giant Buddha at Wat Pho in Bangkok, Thailand. Wat Pho, which is one of Thailand's major tourist attractions and famous for housing the golden 46-meter-long (151-foot-long) Reclining Buddha, has barred entry to foreigners, professing fear that they could spread COVID-19. (AP Photo/Sakchai Lalit)

BANGKOK (AP) — One of Thailand’s major tourist attractions is barring entry to foreigners, professing fear that they could spread the coronavirus.

Signs seen Thursday morning at the main gate of Wat Pho, the Buddhist temple adjacent to the Grand Palace in Bangkok, said in English: “Open for Thai only,” “ONLY THAI PEOPLE,” and “NOW NOT OPEN FOR FOREIGNERS.”

The temple is one of the country’s grandest, with murals and gold trim covering many surfaces, but is best known for housing the 46-meter-long (151-foot-long) Reclining Buddha, which is covered in gold leaf.

One of Wat Pho’s administrative staff explained by phone that the temple committee decided to exclude foreigners because of concerns about COVID-19.

“The outbreak is still rampant in many countries, so we have to stay vigilant as advised by the government,” said Wit Artchinda.

However, there is no known government order to ban foreigners from the temple.

Thai visitors are allowed entry to the temple, more formally known as Wat Phra Chetuphon, which only reopened last week after being closed for two months during Thailand's coronavirus lockdown.

For now the ban has little practical effect beyond excluding expatriates who live in the country, as Thailand has been closed to foreign tourists for two months. Incoming international passenger flights are banned until at least the end of the month.

Tourism is a huge industry in Thailand and its virtual shutdown has dealt a major blow to the economy.

Thailand’s toll of COVID-19 cases has been relatively light, and most recent cases have been Thais who have returned from abroad on special evacuation flights. No new cases were reported Thursday, keeping the total number of cases at 3,125, with 58 deaths.

The temple staff member also said that many parts of the temple, including the hall where the Reclining Buddha is located, are undergoing construction work that limits access anyway.

“Foreign tourists have to pay 200 baht ($6.50) per visit into the temple,” Wit said. “When they pay the money and cannot see so many things that they want to see, we are afraid that they might be frustrated.”

He did not say when the temple might admit foreign visitors again.