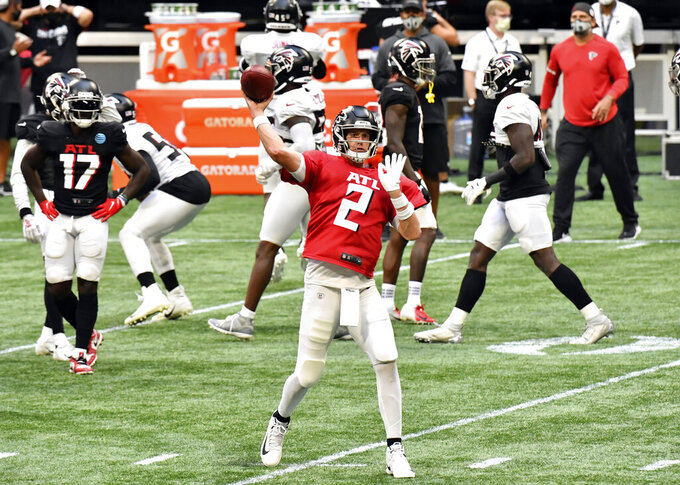 ATLANTA (AP) — The offseason program was virtual. There were no preseason games to work out the kinks or gauge the opposition. Any familiarity will be welcomed in Week 1 of the NFL season.

In that respect, there should be a bit of comfort when the Atlanta Falcons host the Seattle Seahawks in a mostly empty stadium Sunday.

These teams are certainly well acquainted with each other.

Atlanta coach Dan Quinn used to be the defensive coordinator in Seattle, so he’s got a good feel for his former employer. Likewise for the Seahawks, who are quite familiar with Quinn’s tendencies.

If that wasn’t enough, this will be the fifth meeting in five seasons between the teams.

“We’ve seen these guys before,” Seahawks coach Pete Carroll said. “We pretty much know their staff, and they know us too. It’s not like there’s a brand-new coach and it’s the first game and we haven’t seen anything.”

Still, it will be a most unusual opener.

The Falcons are not allowing fans into 71,000-seat Mercedes-Benz Stadium for at least their first two home games because of the coronavirus pandemic.

The Seahawks, who went 11-5 in 2019 and reached the divisional round of the NFC playoffs, feel like they’re positioned to make another run at the Super Bowl.

Coming off their second straight 7-9 season, the Falcons are eager to get off to a good start. A year ago, they lost seven of their first eight games before rebounding to go 6-2 over the rest of the season.

“Nobody wants to start 1-7,” Falcons defensive tackle Grady Jarrett said. “But for us to finish the way we did last year does say a lot.”

Some things to watch for when the Falcons host the Seahawks:

Ryan has a couple of new weapons at his disposal.

Running back Todd Gurley was signed in free agency to bolster the running game, which ranked 30th in the league a year ago with just 85.1 yards per game. If Gurley can stay healthy, that should make the play-action passing game much more effective.

Which brings us to tight end Hayden Hurst. Acquired from Baltimore in a trade, Hurst has good speed for his position and gives Ryan an intriguing option in the middle of the field, especially with receivers Julio Jones and Calvin Ridley drawing so much attention on the outside.

“It’s really, really difficult for defenses to key in on all three,” Ryan said.

One of the big offseason questions was whether Seattle will allow quarterback Russell Wilson to open up the passing attack early in games.

The Seahawks have generally been conservative in the first half, which has often put Wilson in the position of having to lead come-from-behind victories.

Wilson’s supporting cast could be as good as any he’s had in his career, and there’s certainly a case to be made for letting him be more aggressive right from the start: Seattle is 57-0 when leading by four or more points at halftime since 2012.

Seattle could have one of the best defensive back groups in the league after a pair of offseason acquisitions.

Adding All-Pro safety Jamal Adams in a blockbuster July trade was a definitive sign the Seahawks believe they are Super Bowl contenders, bringing the sort of versatility the defense hasn’t had since its championship teams.

Not to be overlooked was the addition of cornerback Quinton Dunbar, although his off-field legal troubles in Florida limited his participation in the offseason program and kept him out early in training camp.

The Falcons must get more pressure on the quarterback to have any chance of returning to the playoffs. Last season, Atlanta managed just 28 sacks — the second-lowest total in the league.

Newcomer Dante Fowler Jr. is expected to provide a boost to the pass rush after recording 11 1/2 sacks for the Los Angeles Rams in 2019. The Falcons also are counting on more production out of Takk McKinley, a 2017 first-round pick who has been a disappointment over his three seasons in the league.

McKinley should certainly have plenty of motivation after the Falcons declined the fifth-year option on his contract.

An improved pass rush would take some of the heat off Atlanta’s youthful secondary.

The cornerback position will be under the microscope after longtime stalwart Desmond Trufant was released in a salary cap move.

The Falcons will be relying on three players who have a total of three years' experience in the NFL: rookie first-round pick A.J. Terrell, second-year player Kendall Sheffield and third-year player Isaiah Oliver. Terrell has impressed teammates with his quiet swagger, while Oliver made big leap in the second half of the 2019 season.

Despite the concerns around the coronavirus, Seattle was sticking with its normal schedule of leaving on Friday for an East Coast road trip.

Carroll acknowledged the unknowns with how this first road trip would go in the midst of the pandemic.

“I’m really curious about it,” he said. “We’ve worked so hard to get to this point, and I’m hoping that we’ll be able to carry it over.”