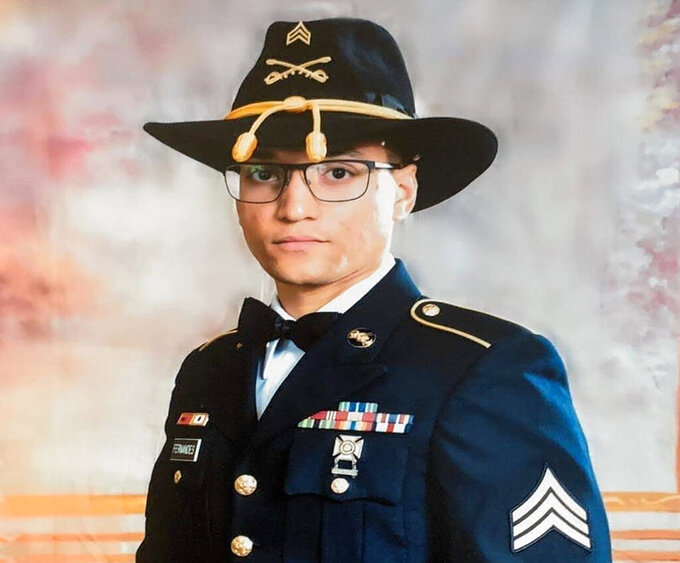 FILE - In this file photo provided by the U.S. Army is Sgt. Elder Fernandes. Police say a body found near Fort Hood, Texas, is likely that of Fernandes. Temple police said late Tuesday, Aug. 25, 2020, that identification found with the body indicates the man may be Fernandes. Fernandes is the third soldier from Fort Hood to go missing in the past year. (U.S. Army via AP, File)

AUSTIN, Texas (AP) — An aunt of a soldier whose body is believed to have been found about 30 miles (48.28 kilometers) from the Texas base where he was stationed says her nephew had been happy in the Army up until a few months ago, when he reported being sexually assaulted by a superior.

A body that authorities believe is that of Sgt. Elder Fernandes, 23, was found late Tuesday in Temple, according to local police. Fernandes was reported missing on Aug. 19 by Killeen and Army police. His identification was found with the body. Forensic confirmation of the identification is pending and an autopsy has been ordered.

Foul play is not suspected, police said, but the investigation is ongoing.

Fernandes' mother, Ailiana Fernandes, and aunt Isabel Fernandes spoke to The Associated Press late Monday, less than a day before the police announcement. His mother said she last heard from her son on Aug. 16, the evening before he was set to be released from Carl R. Darnall Army Medical Center, where he was getting psychiatric care. He told her he would call the next day, but she never heard from him again, she said.

Fernandes is the third soldier from Fort Hood to go missing in the past year. The two others were found dead earlier this summer.

Natalie Khawam, who is representing the Fernandes family, said Army police told family members about the discovery late Tuesday night. She said the body was found hanging in a tree.

“I am saddened that another soldier who served the country has been destroyed by sexual assault and sexual harassment and this toxic culture in the military that exists,” said Khawam, who is also representing the family of Vanessa Guillen, another Fort Hood soldier who went missing and who was found dead.

U.S. Army officials confirmed Wednesday that initial identification points to the body found being Fernandes and said they were grieving with the Fernandes family. Army investigators said an autopsy would be conducted Thursday and a final positive identification was pending.

Elder Fernandes enlisted in the Army in 2016, according to his mom, who lives in Massachusetts. After a three-year deployment in Germany, he returned in December and was sent to Fort Hood, originally for six months. But when the coronavirus pandemic stalled travel across the globe, his stay became extended, she said.

Isabel Fernandes said her nephew was happy in the Army and had just renewed his contract until 2024. But she said things changed when, according to the accounts they have gathered from multiple people close to Elder Fernandes, he filed a sexual-assault claim against a superior on May 11. She said the family has also learned he was bullied, harassed and hazed when he was moved to a new unit following the assault.

Army Criminal Investigations Division special agent Damon Phelps confirmed Wednesday that Elder Fernandes reported that someone had “reached out and touched his buttocks.” Phelps said an investigation was completed, no witnesses were found and the allegation was determined unsubstantiated. Officials declined to give the identity of the accused, who they said took a polygraph test.

Officials said in a previous statement that Fernandes was transferred to a different unit within the brigade following the report and they are unaware of reports of bullying or hazing.

According to Isabel Fernandes, the family was told by Army officials that a different superior signed her nephew's hospital release. The superior dropped him off outside of a house belonging to a former roommate of Elder Fernandes.

But Fernandes never made it to the friend's door.

Army officials said Wednesday that he was dropped off by a superior at the door of the residence where he had asked to be taken. They said he was smoking a cigarette and the superior left.

Ailiana Fernandes remembered her son, one of five kids, as a joyful person who preferred playing with his siblings to going out with friends.

“He would lay on the floor with my 8-month son teaching him how to do push ups and teaching them Army skills,” she said.