Fangio: We all knew NFL season would be jumbled by COVID-19 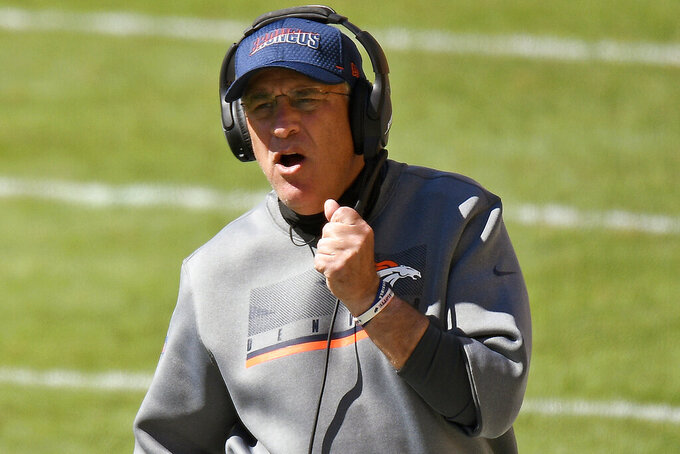 Denver Broncos head coach Vic Fangio walks the sideline during the first half of an NFL football game against the Pittsburgh Steelers in Pittsburgh, Sunday, Sept. 20, 2020. The Broncos play the New England Patriots on Sunday, Oct. 11. (AP Photo/Don Wright)

ENGLEWOOD, Colo. (AP) — Vic Fangio doesn’t subscribe to the notion the Denver Broncos are getting a raw deal because the NFL postponed their game at New England because of the Patriots’ COVID-19 infections.

When the league pushed the game back from Sunday to Monday afternoon, defensive end Shelby Harris tweeted his disagreement with the decision, asking, “Why are we getting punished when we did nothing wrong? Pats go on a bye next week and we are stuck on a short week playing the Dolphins. Help it make sense.”

“I think from the start of this season, all the way back to when training camp started, we all knew that the NFL would not go clean with no positive tests for the entire season,” Fangio said. “We knew there would be some positive tests and those positive tests would cause some inconveniences and change of schedules and adjustments.

“And it just so happens now that we’re part of the adjustments because New England’s our opponent this week (and) they’ve had some positive tests. So, it’s on us to adjust, adapt, improvise and be ready to play the game on Monday night,” Fangio said. “And I’m confident we will do that.”

The delay means Cam Newton, who tested positive for the virus last week, will have a better chance of returning for the Patriots (2-2) after missing New England’s 26-10 loss at Kansas City on Monday night, another game that was pushed back a day after Newton tested positive.

Fangio said that doesn’t change anything for his team, which was preparing to face Newton anyway and not one of his backups, Brian Hoyer or Jarrett Stidham.

“We’ve been under that assumption the whole time that he’d be playing and then adjust if he’s not,” Fangio said.

This week, reigning Defensive Player of the Year Stephon Gilmore joined Newton on the Patriots' reserve/COVID-19 list along with practice-squad player Bill Murray, and the Patriots canceled practice Wednesday and Thursday.

Fangio said he wasn’t ready to announce his own starting quarterback.

Brett Rypien has taken the bulk of the snaps with the starters this week while Drew Lock eased his way back into action after missing 17 days with a sprained right shoulder.

“It’s still open and up in the air as to who will play on Monday night,” Fangio said.

Fangio indicated, however, that he wouldn’t activate Lock on Monday night if he’s not going to start.

The Broncos haven’t had many traditional work weeks so far. In addition to the uncertainty and juggling that occurred this week, they opened on a Monday night and played on a Thursday night last week. So, their Week 6 game against Miami will mark their third shortened week of practice.

MILLER’S COMEBACK: Fangio is on board with Von Miller’s optimism.

The star linebacker told The Associated Press this week that his goal is to return from ankle surgery to play the final four games of the season.

“I haven’t heard anything from the medical people recently about where he’s at in his recovery,” Fangio said. “I don’t think we’ll have a guesstimate on that until later this month, early November, and see where he’s at with his rehab. I know he’s been in a cast and I do know he’s getting out of that cast relatively soon and will start a more vigorous rehab, and we’ll see how that goes.

“I’m not going to say he can’t do it or he will do it,” Fangio added. “But I agree with him: if he’s medically cleared to play and feels good to play, he wants to play and we all want him to play.”

NOTES: Fangio said rookie RB LeVante Bellamy, who tweaked a knee at practice Thursday, likely will miss the game. LB Joe Jones also was added to the team’s injury report after tweaking a knee Thursday but Fangio said, “I think he’ll be fine.”