With fans and flowery hats, Derby is back at old home in May 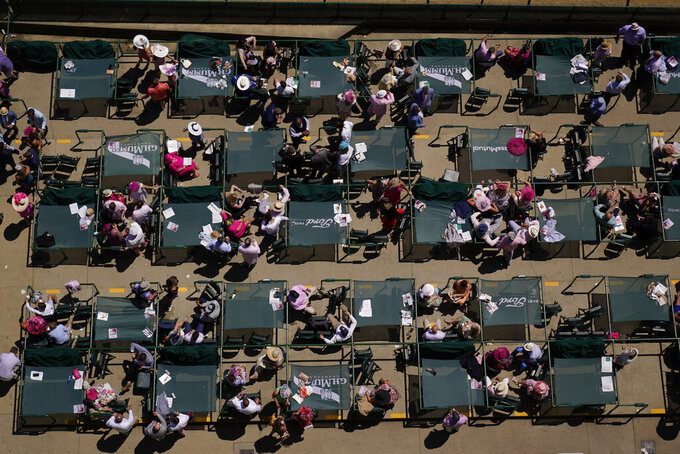 Fans wait for a race while social distancing before 147th running of the Kentucky Oaks at Churchill Downs, Friday, April 30, 2021, in Louisville, Ky. (AP Photo/Charlie Riedel)

LOUISVILLE, Ky. (AP) — The bourbon is flowing again, flowery hats and humans are on the scene and 19 horses are ready to run the most chaotic race of their lives. After being disrupted by a pandemic, the Kentucky Derby is back with many of its traditions intact.

America’s longest continuously held sporting event returns to its traditional spot on the calendar — the first Saturday in May. The 147th edition comes less than eight months after it was run without spectators last September because of COVID-19, making it the shortest time between Derbies in history.

“I was hoping to enjoy my Derby win a little longer,” joked trainer Bob Baffert, who earned his sixth last year with Authentic.

The eerie silence that settled over Churchill Downs last year when no spectators were allowed is being replaced by attendance of about 45,000 — some 100,000 less than usual. Masks are required. Food and drinks are all-inclusive to lessen long lines and separate payments for every transaction.

With the Derby restored to its usual day, last year's upside down Triple Crown has been righted. The Preakness follows on May 15 and the Belmont, which kicked off the series a year ago, concludes it on June 5.

Essential Quality is the early 2-1 favorite on Saturday and has the bona fides. The striking gray colt was last year's 2-year-old champion. He comes in undefeated in five career starts. The last unbeaten colt to win the Derby was Justify in 2018, and he went on to sweep the Triple Crown.

Essential Quality is owned and bred by Godolphin Racing, the stable of Dubai Sheikh Mohammed al Maktoum, who is 0-for-11 in his decades-long quest to win America's greatest race. A victory by Essential Quality would bring extra scrutiny of human rights issues involving the sheikh, who won’t be among the limited fans in attendance.

The Kentucky Horse Racing Commission received a complaint this week from a group of human rights attorneys and students at the University of Louisville seeking to have Sheikh Mohammed banned from the Derby over alleged human rights abuses. A judge in England ruled that he orchestrated the abductions of two of his adult daughters.

Essential Quality's jockey, Luis Saez, is seeking his first Derby win after crossing the finish line first aboard Maximum Security in 2019 only to have his colt disqualified.

“Essential Quality is a deserving favorite,” trainer Todd Pletcher said, “but I think it's a wide-open race.”

Pletcher, a two-time Derby winner, saddles four starters, led by 6-1 shot Known Agenda. His others are listed at double-digit odds: 20-1 Dynamic One, 30-1 Bourbonic and 50-1 Sainthood.

The biggest question for these 3-year-olds is whether they can handle the 1 1/4 miles while getting jostled in a field of 19. King Fury spiked a fever on Friday and trainer Ken McPeek said he would be scratched. As a result, the four horses to the outside of the colt's No. 16 post will move in one spot in the starting gate. They'll be running in front of a noisy crowd for the first time since the pandemic forced tracks to close to the public last year.

Besides Essential Quality, the other undefeated horses in the field are 5-1 Rock Your World and 50-1 Helium, both 3-0. Rock Your World won his first two starts on turf before switching to dirt and winning the Santa Anita Derby.

Two-time Derby-winning trainer Doug O'Neill goes for another with 8-1 shot Hot Rod Charlie, a colt co-owned by his nephew Patrick O'Neill and four of his former Brown University football teammates. “It's going to be the race of a lifetime for these guys,” Doug O'Neill said.

For all its tradition, this year's Derby is one of firsts:

— It’s the first to be run without Lasix. Previously allowed on race day, the anti-bleeding medication has been banned by Churchill Downs and the other Triple Crown tracks.

— Brad Cox attempts to become the first Louisville-born trainer to win. Besides saddling Essential Quality, he has 15-1 shot Mandaloun, whose Juddmonte Farms owner Saudi Prince Khalid bin Abdullah died in January. Cox says a victory would make him “a pretty good ‘Jeopardy!’ question that nobody will answer.”

— Kendrick Carmouche, aboard Bourbonic, could be the first Black jockey to win in 119 years. The Derby was won by Black riders in 15 of its first 28 editions.

— Baffert, tied with Ben Jones for the most Derby wins at six, goes for a record seventh with Medina Spirit, a 15-1 shot, after his other hopefuls were derailed along the Derby trail. “I'm coming in there quiet, but I need luck,” he said.

— Mike Smith, aboard 20-1 shot Midnight Bourbon, would be the oldest jockey to win at age 55.