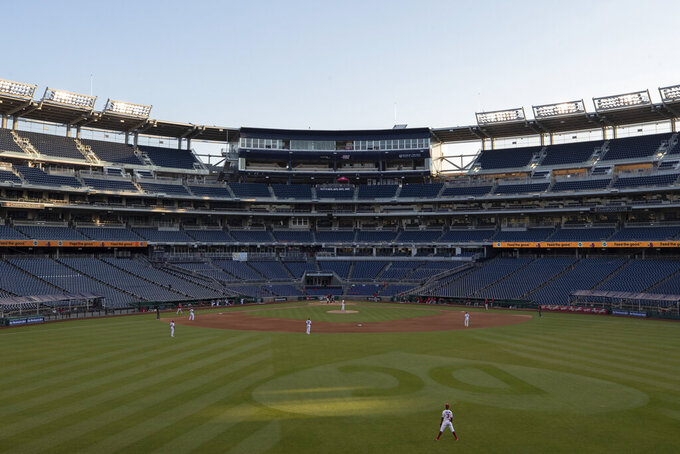 The stands are empty during an exhibition baseball game between the Washington Nationals and the Philadelphia Phillies at Nationals Park, Saturday, July 18, 2020, in Washington. (AP Photo/Alex Brandon)

Nationals owner Mark Lerner and general manager Mike Rizzo each had a better view from the Nationals Park stands, nowhere near each other and both wearing masks, part of many unusual sights and fake, piped-in sounds as Major League Baseball crept closer to next week’s opening day amid the coronavirus pandemic.

“You just have to accept it. Seems like every day there’s a challenge,” said Scherzer, the three-time Cy Young Award winner who gave up three-run shots to old friend Bryce Harper and mask-wearing Didi Gregorius in Washington’s 7-2 loss to the Philadelphia Phillies.

Red-white-and-blue signs proclaiming the home team the “2019 world champions” adorned the mostly empty ballpark even if no spectators were present to see them for Washington’s first game there against an opponent since earning the franchise’s first title.

This was also the first exhibition game between two teams since spring training got called off March 12 because of the COVID-19 outbreak. Not too many folks got to see Scherzer throw 87 pitches and allow seven runs in five innings or Phillies starter Aaron Nola go five scoreless, one-hit innings as both tuned up for opening day: In addition to closed gates, there was no TV coverage.

The umpires sported masks. There was so much silence, occasionally interrupted by the hum of artificial crowd noise -- cheers even accidentally blared as Philadelphia’s homers landed, before the volume was decreased -- or a stadium announcer.

It was a taste of what everyone can expect when the games matter. Washington hosts the New York Yankees on Thursday, the first day of the delayed regular season; Philadelphia hosts the Miami Marlins on Friday.

“The energy in the stadium that’s usually there, isn’t there, per se,” Nationals shortstop Trea Turner said. “It’s definitely different without the fans. It’s going to be take a little bit of an adjustment.”

The area around the ballpark was eerily quiet an hour before first pitch; restaurants and bars that normally would be bustling on such a sunny summer afternoon were mostly empty. The street leading from the nearest subway station to the main stadium entrance is usually packed with last-minute arrivals as gametime approaches.

Saturday, it was deserted.

“It’s always nice to come back home and be in the city here. It’s been a little different, just because you don’t have the atmosphere outside the stadium. Normally, you pull up and there’s a good amount of fans there,” Nationals outfielder Michael A. Taylor said after taking pregame batting practice. “It’s kind of been a ghost town a little bit around here, so that’s been different. But it’s still nice to be back.”

Taylor started because center fielder Victor Robles did not show up to this ramp-up period until Saturday.

Scherzer is slated to pitch the first game that matters for Washington, at home against the New York Yankees on Thursday, and the stats from his final tuneup hardly looked ideal. Still, Scherzer said he was fine with it -- didn’t count at all, of course. He worked on getting his breaking pitches into the zone, he said. “I got beat around a little bit, but that’s good,” Scherzer said. “That’s what happens in the regular season. It’s not always going through lineups.”

The Phillies said special assistant to the GM Bart Braun died Friday night in Vallejo, California. He was 64. Braun pitched seven years in the minors, including at Triple-A, then worked for the Tigers, Pirates, Braves and Rays, before joining the Phillies in 2012. He is survived by his wife, Patty, and son, Bart. Jr. Funeral arrangments were pending.