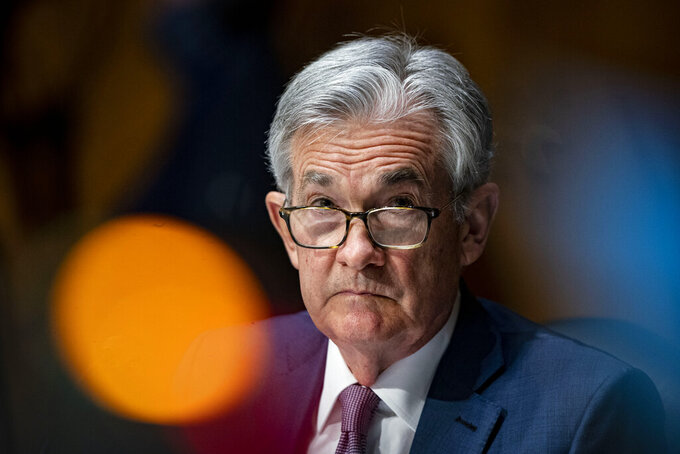 FILE - In this Dec. 1, 2020, file photo, Federal Reserve Chair Jerome Powell listens during a Senate Banking Committee hearing on Capitol Hill in Washington. Federal Reserve officials at their April 2021 meeting reaffirmed the view that the central bank's ultra-low interest rate remained the best policy approach, but some officials cautioned that some factors pushing inflation higher may not be resolved quickly. In minutes of their discussions released Wednesday, May 19, 2021 a number of participants in the discussions expressed the view that supply chain bottlenecks and input shortages that were pushing prices higher may not be resolved quickly and could end up putting “upward pressure on prices beyond this year.” (Al Drago/The New York Times via AP, Pool, File)

WASHINGTON (AP) — The U.S. economy's faster-than-expected awakening from its pandemic-induced slumber had some Federal Reserve officials last month discussing whether it might be time to start planning for easing back on one of the central bank's levers for keeping interest rates low.

The discussions, revealed in the minutes of the Fed's April meeting released Wednesday, marked the first time the central bank has even hinted that the time could be approaching to consider reducing the Fed’s $120 billion monthly bond purchases. The purchases have the effect of putting downward pressure on long-term interest rates.

Officials have been wary about broaching the subject given painful memories of the “taper tantrum” of 2013, when remarks by then-Fed Chairman Ben Bernanke about trimming bond purchases roiled financial markets and sent market interest rates briefly surging.

The minutes of the April meeting said, “A number of participants suggested that if the economy continued to make rapid progress toward the committee's goals, it might be appropriate at some point in upcoming meetings to begin discussing a plan for adjusting the pace of asset purchases.”

The Fed has been so cautious that Fed Chairman Jerome Powell said at his April news conference that the Fed was not even “thinking about thinking about” trimming its bond purchases.

The comment in the Fed's minutes did not specify when talks on reducing bond purchases would begin. But it was the most explicit comment by the Fed that the better-than-expected economic performance could trigger such discussions in some future meeting.

In an effort to give the economy more of a boost, the Fed over the past year has been buying $80 billion per month in Treasury bonds and $40 billion in mortgage-backed bonds.

Kathy Bostjancik, chief U.S. financial economist at Oxford Economics, said she expects the Fed to formally announce bond tapering plans at its late-August conference in Jackson Hole, Wyoming, with the tapering of the bond purchases beginning in early 2022.

The minutes showed that Fed officials had also taken notice of higher inflation readings that were have been occurring this year.

A number of participants in the Fed's discussions expressed the view that supply-chain bottlenecks and input shortages that were pushing prices higher may not be resolved quickly and could end up putting “upward pressure on prices beyond this year.”

Some officials said that in some industries, the supply-chain disruptions appeared to be “more persistent than originally anticipated.”

Still, even with the concerns expressed about price increases, Fed officials said that longer-term expectations about inflation remained well anchored at levels broadly in line with the goal of annual price increases hitting the Fed's 2% target, after rising for a short period above that level.

At its April meeting, the Fed kept its benchmark rate at a record low of 0% to 0.25%, where it has been since March 2020, when the central bank slashed rates after the pandemic hit and millions of people were losing their jobs.

The Fed discussions took place on April 27-28 and the minutes were released with the customary three-week delay.

The Fed will next meet on June 15-16 against a backdrop of rising concerns in financial markets that inflation, after years of being dormant, may have started to accelerate.

The government reported last week that consumer prices jumped in April by 0.8%, the largest monthly gain in more than a decade, with prices rising across a wide range of products.

Powell and other Fed officials have insisted that the inflation seen now will prove to be transitory, a product of a re-opening economy and supply bottlenecks. They believe that in a few months, price gains will slow to a more sustainable pace.

However, some analysts are concerned that the Fed's insistence on keeping interest rates at such low levels could lead to an inflationary surge that will be hard to bring under control. But Powell and other officials contend that if inflation does accelerate, they have the tools to bring it back under control, a point that officials emphasized in the minutes.