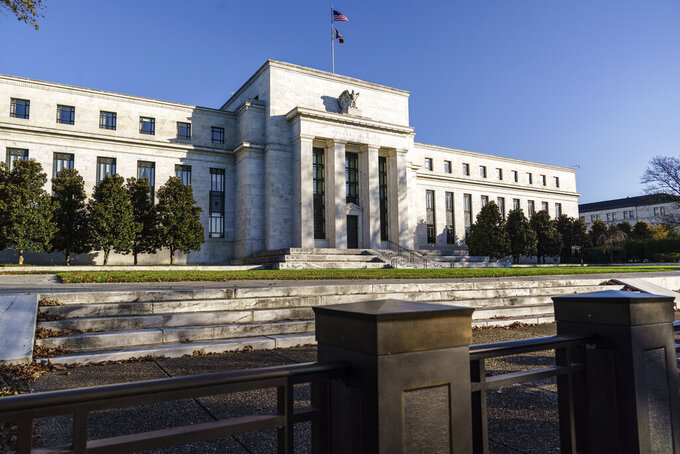 FILE - This Monday, Nov. 16, 2020 file photo shows the Federal Reserve in Washington. Federal Reserve officials last month supported providing advance notice before the central bank makes changes to its $120 billion in monthly bond purchases. The minutes of those discussions released Wednesday, Jan. 6, 2021 show wide support for adding language to the Fed's policy statement to indicate that the purchases would continue “until substantial further progress" has been made toward the central bank's maximum employment and price stability goals. (AP Photo/J. Scott Applewhite, File)

The minutes of those discussions released Wednesday show wide support for adding language to the Fed’s policy statement to indicate that the purchases would continue “until substantial further progress” has been made toward the central bank’s maximum employment and price stability goals.

The language added at the December meeting was seen as a way for the Fed to assure financial markets that there would be no quick end to the purchases. The central bank is making the monthly bond buys to provide further help to an economy struggling to emerge from a pandemic-induced recession that has seen the loss of millions of jobs.

The Fed move appears aimed at avoiding a premature market-triggered rise in borrowing costs that could could boost interest rates for mortgages, auto loans and other consumer and business borrowing activity.

The minutes note that various Fed policymakers stressed that any changes to the size of the purchases should only be made after the Fed had “clearly communicated” its changed assessment of the economic situation “well in advance” of when it planned to make alter the pace or size of the bond purchases.

The monthly purchases, made up of $80 billion in Treasury bonds and $40 billion in mortgage-backed securities, are aimed at putting downward pressure on long-term interest rates. This at a time when the Fed has cut its key policy rate governing short-term interest rates to a record-tying low of zero to 0.25% and indicated it planned to keep the rate that low at least through the end of 2023.

The emphasis on clear communications harkens back to one of the Fed's worst communication blunders. In 2013, then-Chairman Ben Bernanke suggested that the Fed might soon begin tapering its bond purchases that were being made to put downward pressure on interest rates to boost a tepid recovery after the 2008 financial crisis.

Bernanke's statement caught markets by surprise and caused an immediate jump in bond yields. Fed officials had to scurry to assure investors that no immediate reduction in the bond purchases was planned. The incident came to be called the “taper tantrum.”

The minutes of the Fed's December discussion, released Wednesday after the customary three-week delay, did not spell out what would constitute “substantial further progress” in meeting the central bank's economic goals. The minutes did say that officials believed any changes in bond purchases would not be based on “specific numerical criteria or thresholds.”

The Fed next meets on Jan. 26-27 and analysts believe it will leave its benchmark rate at the ultra-low level where it has been since last March with bond purchases continuing at the same pace they are being made now.

Various Fed officials have warned that the winter months could see a slowdown in activity because of the surge in coronavirus cases with more government assistance likely to be needed. Congress last month did approve a $900 billion relief package and President-elect Joe Biden has said he will push for more assistance after he takes office on Jan. 20.