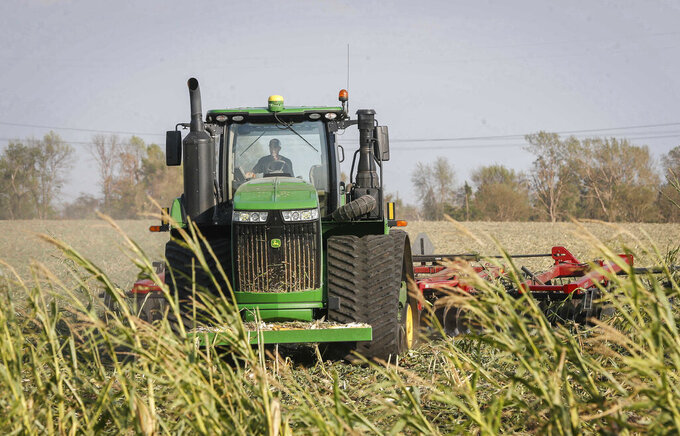 FILE - In this Aug. 26, 2020 file photo, a farmer discs over a corn field on at a farm north of Woodward, Iowa. The corn was damaged beyond salvage by the recent derecho. Thanks to the government paying nearly 40% of their income, U.S. farmers are expected to end 2020 with higher profit than 2019 and the best net income in seven years, the Department of Agriculture said in its latest farm income forecast. Farmers faced challenges throughout 2020 that included the impact of trade disputes; low prices that drove down cash receipts and weather difficulties. (Bryon Houlgrave/The Des Moines Register via AP File)

DES MOINES, Iowa (AP) — Thanks to the government paying nearly 40% of their income, U.S. farmers are expected to end 2020 with higher profit than 2019 and the best net income in seven years, the Department of Agriculture said in its latest farm income forecast.

Farmers faced challenges throughout 2020 that included the impact of trade dispute s; low prices that drove down cash receipts for corn, cotton, wheat, chicken, cattle and hogs; and weather difficulties such as drought in some areas and an unusual August wind storm stretching from South Dakota to Ohio that centered on Iowa.

Farm cash receipts are forecast to decrease nearly 1% to $366.5 billion, the lowest in more than a decade, measured in real dollars. Direct federal government payments saved farmers' bottom line: Farmers overall saw a 107% increase in direct payments from 2019, when a third of net income came directly from the government.

The impact of the money varies from one farm to another, depending on whether a farmer owns the land, has significant capital to draw from, has manageable debt and aggressively manages wide commodity price swings.

“The payment to one farm could be a matter of life and death of that farm and for another farm maybe just makes it not quite as bad of a year as it was going to be and everywhere in between,” said Mike Paustian, a farmer who raises hogs and grows soybeans and corn near Walcott in eastern Iowa. "I’ve described it as: If you’re drowning and somebody throws you a life preserver, you’re not going to argue too much about grabbing ahold of it.”

Federal court bankruptcy data indicates 433 U.S. farms filed for reorganization as of Sept. 30, down from 454 during the same period the previous year.

Overall, net farm income in the United States is expected to increase 43% from 2019 to $119.6 billion, the USDA estimated. Farmers will see the highest level of net farm income, a broad measure of profitability, since 2013, the agency said.

One northeast Iowa farmer said without the federal money it would have been difficult to make ends meet this year but it began to feel like the government checks were motivated by politics from a president seeking support for reelection.

“At first it did help, but then we kept getting payments and I don’t know that those were warranted,” said Rick Juchems, 65, who grows corn and soybeans and custom raises hogs. “The markets had already recovered quite a bit and they’re recovering yet more, so it helps some but it’s one of those things that the second one was more than we needed.”

In a late October campaign appearance in Omaha, Nebraska, President Donald Trump said he believed farmers were better off getting government payments than relying solely on their farming receipts.

“In fact, some people say our farmers do better now than when they actually had a farm,” he said.

Many top farm states voted again for Trump in November, including Iowa, Nebraska, Texas and Kansas. Several, however, left Trump to vote for Democrat Joe Biden, including Wisconsin, Michigan and Georgia.

Bill Gordon, who with his father raises soybeans and corn in southwestern Minnesota, hopes for improved free trade agreements and a less confrontational approach under Biden in 2021.

“Volatility definitely causes volatility," he said. “And so if we can get these free trade agreements set up, that are better, and not as confrontational but still benefit both sides, that just benefits agriculture and rural America.”