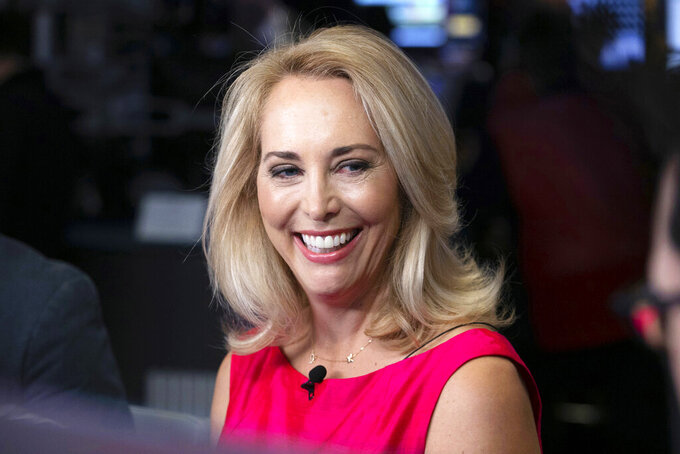 FILE - In this Oct. 22, 2018, file photo, former CIA operative Valerie Plame is interviewed on the floor of the New York Stock Exchange. New Mexico congressional candidate and former CIA operative Valerie Plame is wading into the discussion about President Trump's rationale for ordering the killing of a top Iranian general. Plame on Wednesday, Jan. 8, 2020, questioned Trump's justification for ordering the attack and said the lives of thousands of American troops are at risk. (AP Photo/Richard Drew, File)

The nomination of Leger Fernandez, a professional advocate for Native American pueblo communities and voting rights issues, is likely to be decisive in the vast northern district where Democrats outnumber Republicans nearly 2-1.

In her first run for public office, Plame harnessed her fame as a former U.S. intelligence operative whose secret identity was exposed shorty after her diplomat husband disputed U.S. intelligence used to justify the 2003 Iraq invasion.

On the campaign trail, she emphasized her experience in speaking truth to power in Washington and her solidarity with people who feel betrayed by President Donald Trump.

Trump recently pardoned vice presidential aide I. Lewis “Scooter” Libby of his conviction for lying and obstruction during the investigation into the leak of Plame’s identity.

But Leger Fernandez was able to upstage Plame with support from a long list of advocacy groups for progressive causes and greater Latina representation in Congress. She landed prominent political endorsements from U.S. Rep. Debra Haaland of Albuquerque and U.S. Senator and former presidential contender Elizabeth Warren.

Democrats have monopolized the northern district since its creation in 1983 with the exception of one special election. Leger Fernandez could become the first woman to hold the seat.

The coronavirus pandemic has rampaged across swaths of the 3rd District that overlap the Navajo Nation, and Leger Fernandez has emphasized her dedication to corralling greater federal investment in rural infrastructure and reforms that untether insurance plans from employment status, including Medicare-for-all proposals.

The final weeks of the Democratic primary were marked by untraceable dark-money advertising that included paid social media video spots from a group with anonymous contributors that accused Plame of racism. Plame denounced the ads and has repeatedly apologized for sharing on Twitter in 2017 an article with anti-Semitic expressions, insisting that she opposes anti-Semitism and prejudice in every form. Leger Fernandez denied involvement.