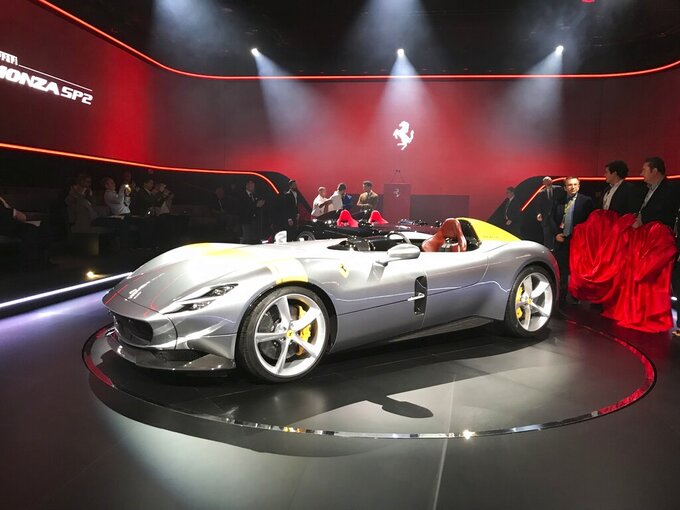 FILE - In this Sept. 18, 2018 file photo, the Ferrari Monza SP1 car is displayed in Maranello, Italy. Luxury sports carmaker Ferrari on Monday, May 4, 2020, significantly lowered full-year earnings guidance due to the COVID-19 pandemic, but acknowledged that the new outlook assumes a sharp recovery in the second half of the year. (AP Photo/Collen Barry, file)

SOAVE, Italy (AP) — Luxury sports carmaker Ferrari on Monday lowered its full-year earnings guidance significantly due to the COVID-19 pandemic, and acknowledged that the new outlook assumes a sharp recovery in the second half of the year.

The company reported an 8% drop in first-quarter net profit to 166 million euros as revenues dipped just 1% to 932 million euros amid a 5% increase in deliveries to 2,738 units.

CEO Louis Camilleri said the lowered guidance assumes that 75% to 100% of the lost earnings will be booked during the second quarter. It takes into account a seven-week disruption in production, which was relaunched Monday, and a projected drop in Formula 1 revenues due to the shortened calendar and plans to run many of the races without the presence of fans, which will hit both sponsorship fees and commercial rights. Branding revenues also are forecast to suffer with fewer visitors to Ferrari’s museum, amusement parks and shops.

CFO Antonio Picca Piccon said the guidance "does not take into account the risks of a severe second wave of infections, which is impossible to model.’’

Ferrari so far has not received significant cancelations in orders, but Camilleri said that during the 2008-9 financial crisis it took a few months for cancellations to affect the order books. He said there had been “several’’ cancelations in the United States and Australia but added "so far there are no red lights flashing in any geography."

“This crisis is very different," Camilleri said. "Possible cancellations are, however, only part of the equation. The other is the level of orders, which are OK.’’

Ferrari said it still intends to go ahead with the two car launches planned for this year, but they will be postponed until the second half.

Camilleri said the company had purchased 800 blood tests that can be administered each day to Ferrari employees and their families on a voluntary basis, and that the company would provide board, lodging and medical assistance to anyone who should test positive. It is developing its own contact tracing system, so workers can determine if they have been in contact with anyone who tested positive.

Italy is also planning to rollout a mobile application that will serve that function but no date has been confirmed.

No Ferrari workers have been furloughed and all have retained full pay during Italy’s shutdown of non-essential manufacturing, Camilleri said. Senior management took a 20% cut in salary and board members are forgoing remaining payments for the rest of the year.

Despite the crisis, Ferrari last month approved a dividend of 1.13 euros per share for a total payout of 210 million euros, which Camilleri said "is tangible evidence of our confidence in the future.’’