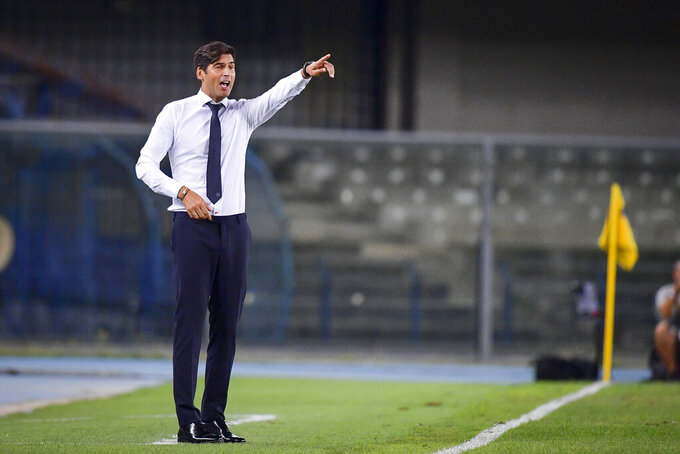 Roma's head coach Paulo Fonseca give instructions during an Italian Serie A soccer match between Verona and Roma at the Bentegodi stadium in Verona, Italy, Saturday, Sept. 19, 2020. (Fabio Rossi/LaPresse via AP)

MILAN (AP) — Gaetano Castrovilli scored the first goal of the Serie A season to give Fiorentina a 1-0 win over Torino on Saturday.

Castrovilli was left unmarked at the back post to volley in a cross from Federico Chiesa 12 minutes from time.

It was almost a copy of the goal Cristiano Biraghi had scored just after halftime for Fiorentina but that was disallowed for offside.

Torino also had a goal disallowed, in stoppage time, as Andrea Belotti’s acrobatic scissor-kick volley was ruled out for offside.

Torino goalkeeper Salvatore Sirigu made a number of fine saves to keep his team in the match.

No fans were present because of the coronavirus pandemic but up to 1,000 fans will be allowed into stadiums for Serie A matches from Sunday.

The Italian government agreed to open up the stadiums to a limited number of fans following a meeting between the health and sports ministers and other politicians on Saturday.

Roma drew 0-0 at Hellas Verona in its first match under new ownership but both sides rattled the woodwork.

Both sides enjoyed chances and Verona hit the crossbar in each half through Adrien Tameze and Federico Dimarco.

Leonardo Spinazzola also saw an effort crash off the bar for Roma.

Roma center forward Edin Dzeko, who remains a source of transfer speculation amid reports that he could be headed to Juventus, was kept on the bench.