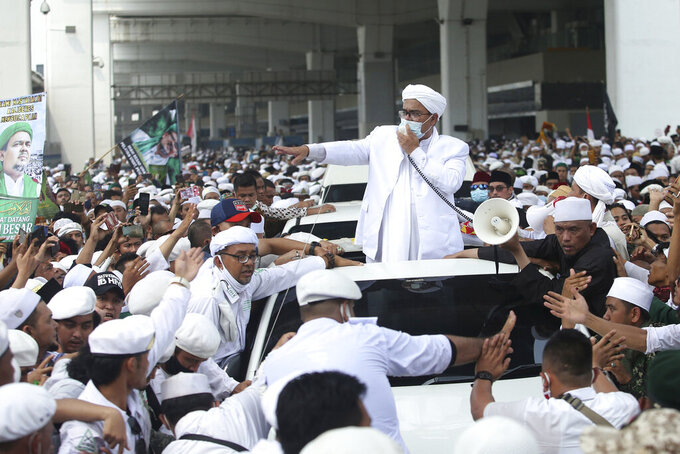 Indonesian Islamic cleric and the leader of Islamic Defenders Front Rizieq Shihab, center, speaks to his followers upon arrival from Saudi Arabia at Soekarno-Hatta International Airport in Tangerang, Indonesia, Tuesday, Nov. 10, 2020. Thousands of followers of the firebrand cleric joyfully welcomed him at an the airport as he returned home from a 3-year exile in Saudi Arabia after criminal charges including a pornography case were dropped. (AP Photo)

JAKARTA, Indonesia (AP) — Tens of thousands of followers of a firebrand cleric joyfully welcomed him at an Indonesian airport on Tuesday as he returned home from a 3-year exile in Saudi Arabia after criminal charges including a pornography case were dropped.

The supporters, waving banners and placards, erupted with joy when they saw Rizieq Shihab, leader of the Islamic Defenders Front, and his family leave the immigration area at the airport.

Wearing a white robe, turban and face mask, Shihab stood up in the sunroof of a car and waved as his motorcade struggled to pass through the thousands of followers chanting “God is Great” who filled the road leading from Jakarta’s Soekarno-Hatta airport.

The massive crowds halted traffic to and from the airport, forcing several airlines to delay their flights.

Shihab left Indonesia in 2017 to go on an umrah, or minor pilgrimage, to Mecca shortly after the National Police charged him in a pornography chat case and with allegedly insulting the official state ideology, Pancasila. Police dropped both charges last year due to weak evidence, but authorities in Saudi Arabia had banned him from leaving the country without any explanation.

The Islamic Defenders Front was once on the political fringes and has a long record of vandalizing nightspots, hurling stones at Western embassies and attacking rival religious groups. It wants Islamic Shariah law to apply to Indonesia’s 230 million Muslims.

The group has gained significant influence in recent years through humanitarian and charity work. It was a key organizer of massive street protests in 2016 and 2017 against the Christian governor of Jakarta, who was subsequently imprisoned for blasphemy.

Many of Shihab's followers spent the night at the airport waiting and praying before his arrival, airport spokesperson Haerul Anwar said. Authorities beefed up security at the airport by deploying more than 1,500 personnel, including police and military, he said.

“We did not mobilize them to come, they came voluntarily because they had long missed their beloved leader,” Islamic Defenders Front spokesman Slamet Ma’arif told TVone. He urged the followers to welcome their leader in an orderly manner and comply with health protocols amid the coronavirus pandemic.

In a speech after arriving home in Petamburan in central Jakarta, Shihab said he would continue to fight injustice.

“My return home today is to call on you and to invite all Indonesian Muslims to join in a moral revolution. Do you agree? Are you ready to start a moral revolution today?” he asked his followers, who responded by cheering and shouting their approval.

He said the moral revolution should include fighting all kinds of injustice and corruption, and changing human nature from conducting bad deeds to good ones.

“We’ve never stopped him from going home, if he was impeded, it is his business with the Saudi Arabian government,” Mahfud told reporters in response to an address by Shihab on the front’s official YouTube channel in which the cleric announced his imminent return.

Agus Maftuh Abegebriel, Indonesia's ambassador to Saudi Arabia, said Shihab was given a visa to leave Saudi Arabia this month for Indonesian citizens who undergo a deportation process.

“His return certainly made some people worried,” said Karyono Wibowo from the Indonesian Public Institute, an independent survey group. “He could potentially strengthen his group as an opponent of the government because he has significant influence and followers to be reckoned with by all politicians in this country."

Wibowo said this would not have a negative impact if the opposition works to strengthen democracy and improve the nation.

Indonesia is the world’s most populous Muslim country. It has a secular government and a reputation as a tolerant, pluralist society that respects freedom of expression. Most Indonesians practice a moderate form of Islam, but a small extremist fringe has become more vocal in recent years.

In an interview with The Associated Press last year, President Joko Widodo said he would try to work with Islamist groups as long as their views don’t violate Indonesia’s founding principles that include a secular government and tolerance of several officially recognized religions.

“If an organization endangers the nation in its ideology I won’t compromise,” he said.

Widodo in 2017 banned Hizbut Tahrir Indonesia, a smaller group that campaigned for a global caliphate.