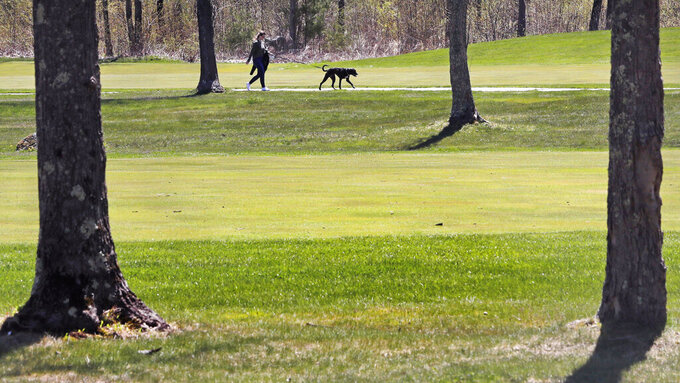 A woman walks a dog on a cart path of a golf course, which was closed along with many other nonessential businesses due to the COVID-19 virus outbreak, at the Atkinson Country Club in Atkinson, N.H., Tuesday, May 5, 2020. Golf courses across the state are expected to reopen for New Hampshire residents and members on May 11, as some virus lockdown measures are lifted. (AP Photo/Charles Krupa)

CONCORD, N.H. (AP) — Representatives of fitness clubs, amusement parks and youth baseball on Tuesday told a task force on reopening New Hampshire’s economy that they are prepared to make a variety of health and safety adjustments so they can operate during the coronavirus pandemic.

Health clubs, which have a relationship with its members, can rearrange floor plans, cordon off areas, lower group exercise participants, and stagger appointments, said Mike Benton, CEO of the Executive Health & Sports Center and owner of other facilities. Saunas, steam rooms and areas that allow contact sports such as basketball and racquetball would be closed.

Overall occupancy would be reduced by half and visits would be limited to New Hampshire members. The hope is that clubs could re-open May 18, Benton said.

The next phase would allow the opening of attractions such as Canobie Lake Park, Santa’s Village and the Cog Railway, allowing for social distancing, face masks for workers and guests, more hand-washing areas, and more visible “clean teams.”

Rick Harvey, chairman of the New Hampshire American Legion Baseball Program, proposed a season starting June 20. He said players’ temperatures could be taken before a game and that face masks be worn in the dugout. But he said a number of teams haven’t yet bought accident liability insurance for the summer and are waiting for more guidance on whether children will be able to play.

“We don’t want these kids in the field to be in danger,” he said.

New Hampshire's Supreme Court has issued an order requiring people to wear a face covering when they enter a court because of the coronavirus pandemic.

“This rule applies to all who work in the Judicial Branch as well as litigants, lawyers, members of the media, and members of the public," according to the order issued Monday.

Judicial branch staff and judges aren't required to wear masks when they can consistently maintain at least 6 feet of social distancing, the order said.

It remains in effect until at least Monday, May 25.

The annual sand sculpting competition at Hampton Beach in June has been rescheduled for Labor Day weekend, Sept. 3-5.

New Hampshire’s beaches have been closed since the end of March when Gov. Chris Sununu announced his stay-at-home order because of the pandemic.

As of Tuesday, 2,636 people in New Hampshire have tested positive for the virus, an increase of 50. Ninety-two people have died.