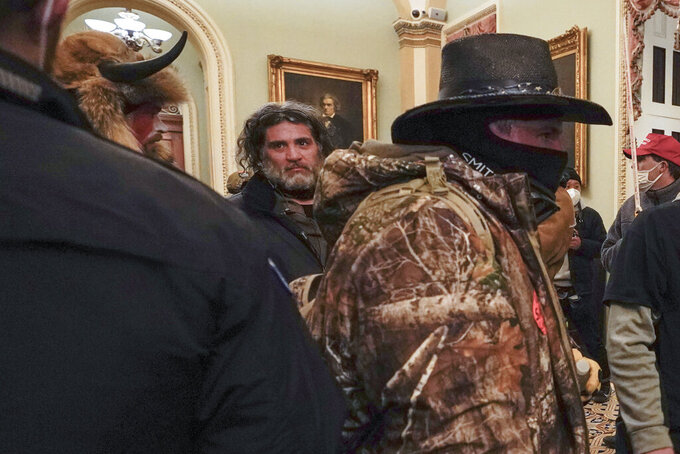 In this Jan. 6, 2021, photo, rioters, including Dominic Pezzola, center with beard, are confronted by U.S. Capitol Police officers outside the Senate Chamber inside the Capitol, Wednesday, Jan. 6, 2021, in Washington. The Proud Boys and Oath Keepers make up a fraction of the more than 300 Trump supporters charged so far in the siege that led to Trump's second impeachment and resulted in the deaths of five people, including a police officer. But several of their leaders, members and associates have become the central targets of the Justice Department’s sprawling investigation. (AP Photo/Manuel Balce Ceneta)

Together, the unprecedented investigation into the Jan. 6 Capitol insurrection and court decisions giving the federal government sudden jurisdiction over crimes on more Native American lands have put enormous pressure on the Justice Department, creating an immediate challenge for new Attorney General Merrick Garland. And defendants could be waiting a long time - some of them behind bars - for their day in court.

U.S. attorneys' offices across the nation employ roughly 6,000 lawyers in 94 offices, large and small, and handled more than 69,000 cases in 2019. Those included the most serious terrorism cases, violent crimes, financial fraud and other federal offenses.

This year was already expected to bring a vastly larger workload, with few new hires, including a year's worth of trials and grand juries put off by the coronavirus. Now, more than 300 people have been charged so far in the Capitol riot that resulted in the deaths of five people, and at least 100 more are expected to be charged.

Investigators have gathered a colossal amount of evidence to build cases ranging from unlawful entry to serious conspiracy charges against members of the far-right extremist groups Proud Boys and Oath Keepers. Authorities are still searching for some of the most violent offenders, and released videos Thursday to urge the public to help identify people seen assaulting officers.

Meanwhile, federal prosecutors in Oklahoma are seeing massive increases in caseloads as the result of a U.S. Supreme Court ruling last year that determined a large swath of eastern Oklahoma remains an Indian reservation because Congress never voted to disestablish it. As a result, the state has no jurisdiction in more cases involving Native American defendants or victims that took place on tribal lands. And that is expected to invalidate hundreds of state convictions, including 10 death row cases. Those cases, and any new ones, must be tried in federal or tribal court.

On Thursday, an appeals court in Oklahoma overturned five more convictions, including that of a former Tulsa police officer convicted of manslaughter for the 2014 shooting death of his daughter's boyfriend.

At the same time, senior officials at Justice Department headquarters have asked U.S. attorneys across the country to identify prosecutors who could serve temporary duty prosecuting some of the Capitol riot cases, according to three people familiar with the matter who were not authorized to speak publicly and spoke on condition of anonymity. The prosecutors would be reassigned to the U.S. attorney’s office in Washington for up to nine months.

The Justice Department acknowledges the increased workload, saying officials are “carefully assessing the impact of recent court decisions affecting the work” of federal prosecutors in Oklahoma, along with the impact the riot prosecutions are having on the U.S. attorney's office in Washington.

“We have realigned existing resources to assist these districts and will continue to monitor the situation,” the department said in a statement.

In Oklahoma, where the rulings have led to the reversal of murder convictions and death sentences, prosecutors refer to it as the “McGirt tax” – the name of the petitioner in the Supreme Court case - meaning the need to supplement resources or get congressional appropriations to manage the crush of cases.

Meanwhile, Capitol riot investigators are wading through more than 15,000 hours of footage from surveillance cameras and officers’ body-worn cameras, information from about 1,600 electronic devices and more than 210,000 tips from the public. Authorities have executed more than 900 search warrants in nearly all 50 states and the District of Columbia.

Prosecutors in some Capitol riot cases, including the alleged Oath Keepers' conspiracy, want a two-month pause because of the volume of evidence, saying the failure to grant it “would be likely to make a continuation of this proceeding impossible, or result in a miscarriage of justice.”

Carmen Hernandez, a lawyer for a man charged in the case, said she has serious concerns about timing. The Capitol riot cases will likely be lined up behind older ones waiting months to go to trial, Hernandez said, noting that she had one originally scheduled for last April that's now booked for September.

“My concern is my client sitting in jail," said Hernandez, who represents Donovan Crowl. Hernandez said her client is not a member of the Oath Keepers and denies the allegations against him and that she will push for him to be released while he awaits trial.

A prosecutor in one Capitol riot case suggested last week that plea offers will start coming soon, which would allow the Justice Department to begin getting some cases off its plate. But even if a defendant avoids trial by pleading guilty, he or she still needs to be processed through the court and sentenced. That takes manpower.

The chief judge for Washington’s federal court announced this month that a limited number of jury trials could resume for the first time since the coronavirus upended courts across the U.S. Some other courts have already been holding a small number of trials, but much of the work of the U.S. legal system continues to be done over videoconference.

In Oklahoma, the Supreme Court decision applied specifically to the Muscogee (Creek) Nation, but four other major tribes in Oklahoma — the Cherokee, Chickasaw, Choctaw and Seminole nations — have similar treaties, so state appellate courts have ruled some of those tribes’ reservations also remain intact.

Those five reservations cover the entire eastern half of the state, including the Tulsa metropolitan area with nearly 1 million people. In Oklahoma, nearly 10% of the population identifies as Native American, according to U.S. Census Bureau data.

The top prosecutor for the Northern District of Oklahoma said that while his office typically issues about 240 criminal indictments in a year, they handed down 100 last month alone.

“I think realistically we’re looking at an increase of about 300 to 400%,” said acting U.S. Attorney Clint Johnson. “Right now, because of our resources, we’re triaging and taking the most serious of cases, the violent crime cases, the cases that have acts against children and things of that nature."

After the high court decision last summer, more than 14 attorneys, along with several more legal assistants and victim specialists, agreed to a six-month detail because of the increased cases, Johnson said. Several are extending for another six months. In addition, employees in several other states are helping remotely with motions and appeals.

Christopher Wilson, the U.S. attorney for the Eastern District of Oklahoma, whose office traditionally has eight assistant US attorneys, has been authorized to hire 16 more on a one-year contract.

He doesn't know the total number of cases yet, but the workload will be substantial, he said.

“We’re still in the process of trying to wrap our heads around that," he said.