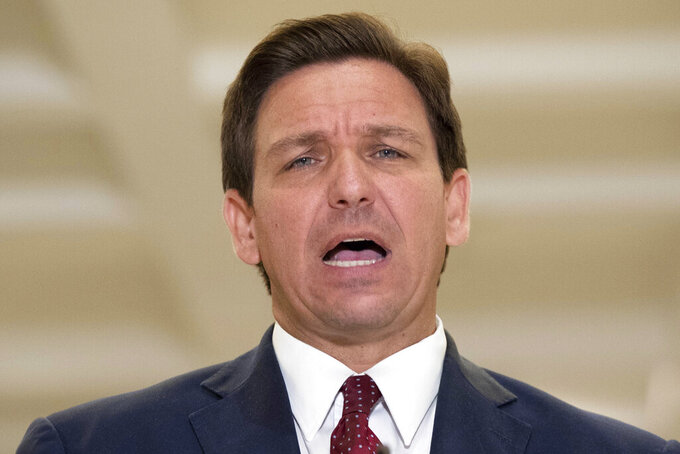 Florida Gov. Ron DeSantis speaks to the press after giving his State of the State speech on the first day of the 2021 Legislative Session in Tallahassee, Fla. Tuesday, March 2, 2021. (Tori Lynn Schneider/Tallahassee Democrat via AP)

The revelations were the latest example of wealthy Floridians getting earlier access to coronavirus vaccines, even as the state has lagged in efforts to get poorer residents vaccinated.

DeSantis pushed back Thursday, saying a local hospital — not the state — was behind the vaccinations of more than 1,200 residents of the exclusive Ocean Reef Club in Key Largo, Florida, and that the state “wasn't involved in it in any shape or form.”

Despite the governor's denials of quid pro quos, the charges of favoritism were amplified by the wads of money pouring into the governor's campaign coffers from wealthy benefactors with ties to communities awarded vaccination sites — like the one in Key Largo. One resident of Ocean Reef, Republican former Illinois Gov. Bruce Rauner, last week gave the Florida governor's campaign committee $250,000.

Revelations about Ocean Reef residents getting vaccinated were first reported by the Miami Herald.

The inequitable distribution of the COVID-19 vaccines is becoming a public relations challenge for the governor. Of the 3.2 million people who have received one or two doses of the vaccines, less than 6% have been Black — about a third of their share of the state's population.

“If this isn’t public corruption, I don’t know what is,” Fried said Thursday at a press conference in the Florida Capitol, calling on the FBI's public corruption to launch an investigation.

“Give campaign contributions big dollars, get special access to vaccines -- ahead of seniors, ahead of our teachers, ahead of our farmworkers and so many of our residents here in our state of Florida who are scared and who are wanting these vaccines.”

Citing reporting from the Herald, Fried noted that DeSantis in February had his biggest fundraising haul since 2018, when he was running for governor.

Last week, Crist, a former Florida governor, asked the U.S. Department of Justice to look into possible favoritism in the state's distribution of the vaccines, asserting that DeSantis were benefiting "political allies and donors, over the needs of higher-risk communities and existing county waitlists.”

Both Crist and Fried are considering campaigns to oppose DeSantis in next year's gubernatorial election.

Other Florida Democrats, including the top Democrat in the state Senate, Gary Farmer, joined in the call for a federal investigation.

"The exchange of hard-to-get vaccines for political contributions is nothing short of criminal," Farmer said in a letter dashed off to acting U.S. Attorney General Monty Wilkinson.

During a Thursday news conference, DeSantis expressed no misgivings about the early vaccinations at the exclusive Key Largo community.

The Republican Party of Florida came to the governor’s defense, calling the controversy “another bogus conspiracy theory.”

“It doesn’t matter what party you belong to, whether you are rich or poor, if you qualify for the vaccine, you can get a vaccine. All you need is an arm,” said Helen Aguirre Ferre, the state party’s executive director.

The Ocean Reef Club, a senior community in Key Largo, had more than 1,200 homeowners vaccinated through their second dose by late January, according to a message to community members by the management obtained by the Miami Herald.

Those vaccinations came at a time when “the majority of the state has not received an allocation of first doses,” the management noted.

Officials from Monroe County, home to Key Largo, said the affluent club’s medical center received the vaccines through the Baptist Health hospital as part of the governor’s program to vaccinate communities with a populations of people 65 and older. County spokeswoman Kristen Livengood said the allocations were coordinated through Baptist and the state of Florida.

In recent weeks, other reports have surfaced of wealthy retirement communities getting exclusive access to vaccine doses through pop-up vaccine sites. Democrats have criticized him for choosing those places, but the governor’s office has noted that more than half of them have been in Democratic stronghold counties of Broward and Palm Beach. Supporters of DeSantis say he has also coordinated clinics with faith-based groups in underserved areas.

Jared Moskowitz, a Democrat and the state's director of the Division of Emergency Management, said the administration is working “diligently” to increase vaccine access in underserved communities.

“Any other narrative is intentionally misleading and wrong,” he said in a statement Thursday.

After Publix was made the sole distributor of vaccines in Palm Beach County in late January, the mayors of predominately Black farming communities in the area urged the governor to reconsider, and the state set up a vaccine station shortly after.

While critics point to disparities in vaccine distributions as a call for more outreach into underserved areas of the state, including in communities of color and impoverished neighborhoods, DeSantis noted that "demand was relatively tepid in FEMA sites in Miami, Tampa, Orlando and Jacksonville. The governor said the four sites had the capacity to administer 12,000 doses but only vaccinated 6,500 people.

A previous version of the story erroneously reported the donation amount given by former Illinois Gov. Bruce Rauner to the Florida governor's campaign committee.