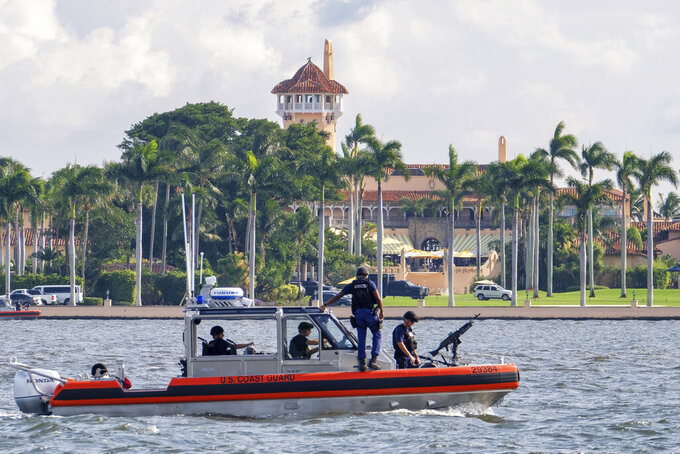 FILE - In this Nov. 22, 2018 file photo, a U.S. Coast Guard patrol boat passes President Donald Trump's Mar-a-Lago estate in Palm Beach, Fla. Trump's expected move to his Mar-a-Lago club after he leaves office next month is being challenged by a lawyer who says a 1990s agreement allowing Trump to convert the property into a business prohibits anyone from living there, including him. (AP Photo/J. David Ake, File)

Democratic state Rep. Omari Hardy filed a complaint with Palm Beach County, urging it to take action against Mar-a-Lago, writing “as far as I know, the law still applies to the President and his businesses.” The county ordinance says indoor businesses must require patrons and employees to wear masks when they are not eating or drinking. The maximum fine for a first violation is $250.

Hardy, who represents a nearby district that is predominately African American, said he was “furious” when he saw photos and videos of the $1,000-per-person party posted on social media. They show patrons packed together on the dance floor as rapper Vanilla Ice, Beach Boys co-founder Mike Love and singer Taylor Dayne performed. He said the partygoers’ actions endangered the club’s staff and the local community.

“My constituents have been disproportionately affected by every aspect of this virus — medically, educationally and economically,” said Hardy, adding he wore a mask at his wedding a month ago and hasn't hugged his mother in 10 months. "But these out-of-towners for one night couldn’t wear a mask. It is offensive and disrespectful.” More than 22,000 Floridians have died of COVID-19.

Todd Bonlarron, the county's assistant administrator, said Monday he has forwarded Hardy's complaint to the county's COVID education team, which will investigate and could impose punishment. He said Mar-a-Lago will be treated just like any other business and a decision should be made shortly. He said he is not aware of any previous complaints against the club.

Trump had been scheduled to attend Thursday night's party, but he left Mar-a-Lago a few hours before it began as he spent the weekend trying to overturn his election defeat to President-elect Joe Biden. His sons Don Jr. and Eric attended along with his attorney Rudy Giuliani, Fox News host Judge Jeanine Pirro and U.S. Rep. Matt Gaetz, a Florida Republican who is one of the president’s staunchest supporters.

“This is amazing. Vanilla Ice is playing the Mar-a-Lago New Years Eve party. As a child of the 90s you can’t fathom how awesome that is,” Donald Trump Jr. wrote on a Facebook post that included a video of the party. The video showed tightly packed attendees bouncing and singing along as the rapper performed his decades-old hit, “Ice Ice Baby.”

Last month, a Mar-a-Lago neighbor filed a complaint with the Town of Palm Beach challenging Trump's possible move to Mar-a-Lago after he leaves office this month. When the town agreed in 1993 to convert the private residence into a club, his attorney said he would no longer live there. The town has not announced any decision on that complaint.