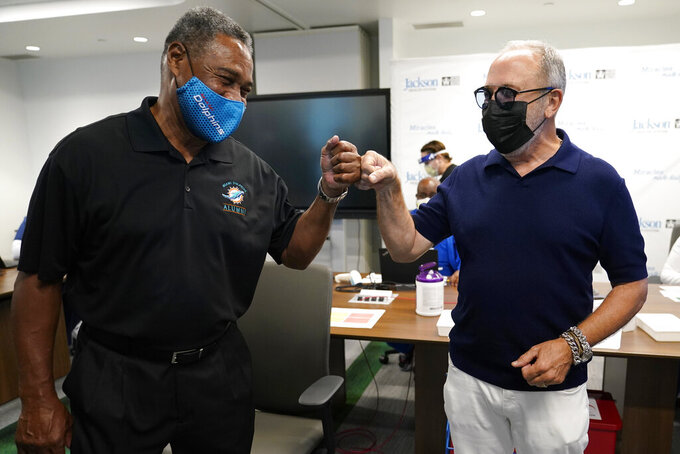 TALLAHASSEE, Fla. (AP) — Florida Gov. Ron DeSantis begged for patience from anxious seniors waiting their turn to get inoculated against COVID-19, as confusion and frustration arose over the availability of the life-saving vaccine among some of the state's most vulnerable.

At vaccination sites across the state, seniors formed long lines — some camping out overnight with lawn chairs and blankets — hoping to gain immunity to fight the virus. Before the sun had even risen Wednesday morning, one southwest Florida county's vaccine supply for the day was already accounted for, prompting officials to turn down anyone else who was arriving.

Seniors in other parts of the state were frustrated by busy phone lines and websites that would no longer issue new vaccination appointments.

DeSantis has prioritized Floridians older than 65 to be next in line for the state's stock of vaccine, now that most health care workers and other first responders are protected against the virus that has infected more than 1.2 million Floridians.

More than 82% of those who have died from the disease have been older than 65, underscoring the urgency in getting older Floridians vaccinated, the governor said Wednesday.

“The COVID-19 vaccine supply is still limited. We don't have enough vaccine currently on hand for all 4 million-plus senior citizens in the state of Florida,” the governor said during a news conference in Delray Beach. “We're going to get there but it's not going to happen overnight. So please be patient.”

Amid uncertainty about how quickly the state can acquire more doses of two now-available vaccines, county health departments and hospitals across the state are scrambling to deliver the vaccine to seniors.

Lin Humphrey, a college professor whose 81-year-old mother lives with him in a high-rise apartment in Miami, said it took him about 80 calls to get someone on the phone at a Miami Beach hospital that began inoculating elderly people last week with limited doses of the vaccines.

“It reminded me of the 80s where you had to call into a radio station to be the 10th caller to get concert tickets,” Humphrey said. “When I finally got through, I cried on the phone with the woman.”

Early Wednesday morning, health officials in Lee County, home to Fort Myers, announced all three vaccination sites had reached capacity in its third day of providing injections to residents 65 and older. People had lined up outside a library, recreation center and a theater to snatch one of the few hundred doses available after health authorities said no appointment was necessary as they would be administered on a first-come, first-serve basis.

The Orlando Sentinel reported that state health officials in Orange County on Tuesday closed its online portal after generating 30,000 appointments in about 24 hours. And the Broward Health hospital network said it would stop scheduling vaccine appointments on the same day they began “due to overwhelming community demand.”

Abdulla Benkhatar, 90, was at the front of the line Tuesday morning at a recreation center in Fort Myers.

“We’ve been at home for almost 10 months now. It’s really important to me, for my health, and to be able to do things I like to do and get back to normal," he told WZVN-TV.

As of Tuesday, the Florida Department of Health said it had administered doses to roughly 175,465 in the state, most of them health care workers, emergency first responders and residents of assisted care facilities.

Some seniors began receiving shots Monday in the first eight counties who received their vaccine allotments last week. The state’s other 59 counties are expected to soon begin receiving their share of vaccines.

In Miami, Jackson Health System began administering vaccines to those who are 65 and older and are receiving care in the network. Music producer Emilio Estefan, 67, and Miami Dolphins senior vice president Nat Moore, 69, received the first dosage of the vaccine Wednesday in front of reporters at Jackson Memorial Hospital.

Jackson Health said it will launch an online platform next week for residents to book appointments to get the shot.

Counties and hospitals have taken different approaches in how they administer the vaccine, prompting confusion, frustration and lines.

“They are going to work through issues, as they have been,” the governor said. “If you are 65 and older, you are going to get access to this. It may not be today for everyone, may not be next week. But over the next many weeks, as long as we continue getting the supply, you're going to have the opportunity to get this.”

Florida Agriculture Commissioner Nikki Fried said she wrote to DeSantis recommending he mobilize the Florida National Guard to distribute COVID-19 vaccines, arguing the rollout has been too slow.

“Despite the state receiving 1,218,300 vaccine doses, only 15% of those have actually been administered,” she said in the letter. “The lack of preparation and progress on administering these critical, life-saving vaccines is inexcusable.”