Flyers drop from trendy East favorite to another lost season 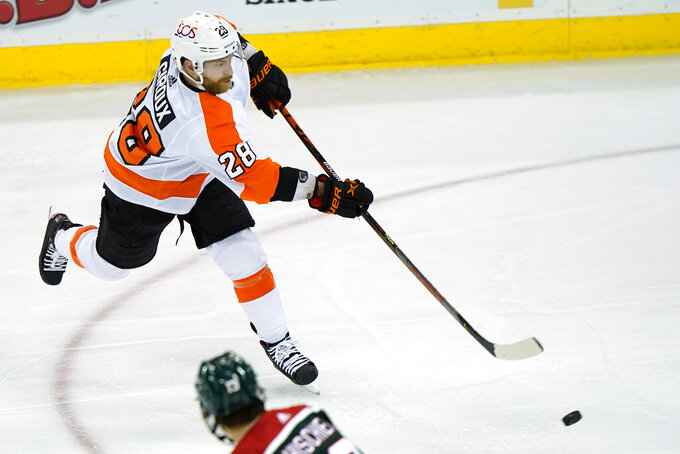 PHILADELPHIA (AP) — Alain Vigneault met with Philadelphia Flyers general manager Chuck Fletcher after the team was eliminated from the playoff race and was blunt on his self-evaluation.

“I sort of felt like I’ve let everyone down here, from him to ownership to our fans to our players,” Vigneault said.

Vigneault’s second season on the bench opened with so much promise coming off a successful debut that included a playoff series victory for the first time since 2012.

What the Flyers (25-23-8; 58 points) suffered through instead was, in many ways — thanks to big expectations — a season that ended with disillusionment.

It still ended like so many of the rest: Without a sip out of the Stanley Cup. The Flyers have not won the championship since taking consecutive Cups in 1974 and 1975 and have not played in the Final since 2010.

Vigneault was hired with a championship pedigree, having led the Rangers and Canucks to the Cup Final, but his first two seasons in Philly have been shortened and hampered by the pandemic.

There was, of course, nothing normal about this season and the Flyers were no more affected than any other team in the NHL.

Yet, Vigneault and Fletcher indicated the root of their struggles started last offseason when the Canadian players struggled to train at home.

They pinned their woes on COVID-19-related absences and no practice time that set back a core of promising talent that on the whole regressed.

“Those younger players, when the game slips a little bit, were not quite executing the way we need to have success,” Vigneault said.

“You have to practice and we didn’t have any practice time. I’m not saying that’s the reason. A lot of things happened, but I’m going to need some time to reflect on it. But I do think that played a part in our game slipping and our season going the way it did.”

Consider some of the numbers:

— Lost to a Sabres team that had lost 18 straight games.

Comcast Spectacor CEO David Scott took five questions Tuesday for his first full-media availability this season without providing much of a game plan for the future.

“The city of Philadelphia deserves so much more,” he said.

The Flyers once routinely packed the arena and the orange-and-black faithful could make Philly one of the best hockey cities in the league.

Now, the Flyers have dropped behind the other pro teams when it comes to buzz and fan interest, and the roster misses that Bryce Harper or Joel Embiid — the kind of player you pay to watch and can change the outcome with one play.

The Flyers have plenty to figure out this offseason.

The most baffling setback this season came with 22-year-old Carter Hart struggling as the No. 1 goalie. He went 9-11-5 this season with a 3.67 goals-against average.

Last year, Hart became the youngest goalie in Flyers history with a shutout in Game 3 at 22 years, 3 days and his second one made it the fifth time in NHL history a goalie had back-to-back postseason shutouts before age 23. Carter sat out the final games of this season with a mild knee strain.

“Certainly, we’re going to have to take a look at our situation in goal, which has kind of been a constant struggle here for years,” Fletcher said.

The Flyers' use of the “Anytime. Anywhere” slogan might need a tweak.

Fletcher and Vigneault said players who spent last season in Canada had trouble finding gyms, training facilities and ice time because of the lockdowns, and players such as Travis Konecny and Sean Couturier were among the players who didn’t play up to their potential.

“One of my questions when meeting with the players this afternoon is, what are you doing this summer? If things stay the way they are right now in Canada, they’re going to have to make some adjustments to their summer plans,” Vigneault said.

“I can’t reflect throughout the rest of the NHL, but our team, the Canadian players that went back to Canada had a challenging time.”