On Football: Halfway through season, who are awards leaders? 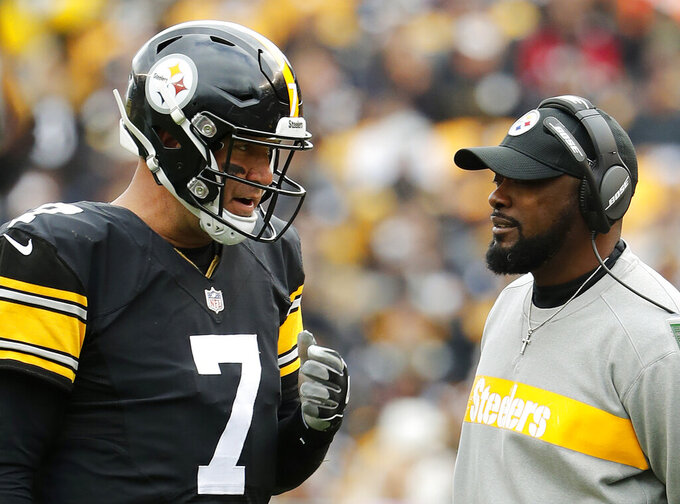 FILE - In this Oct. 28, 2018, file photo, Pittsburgh Steelers quarterback Ben Roethlisberger and coach Mike Tomlin during the team's NFL football game against the Cleveland Browns in Pittsburgh. Roethlisberger, who went out in Game 2 last season with an elbow injury, received lots of support as a candidate for comeback player of the year, at the halfway point of the season. Tomlin was lauded for coach of the year, at this point of the season, by Hall of Famer James Lofton and hall voter Rick Gosselin. (AP Photo/Winslow Townson, File)

Each year on Super Bowl Eve, The Associated Press presents its individual awards for the NFL season in a prime-time showcase fitting for the honors. We're only halfway through the 2020 schedule, impacted of course by the coronavirus pandemic, but it's worthwhile to take a look at the front-runners in the various categories.

This has become a quarterbacks award since the game and league rules skewed toward the offense. Only running back Adrian Peterson in 2012 has broken the QB string that goes back to Tom Brady's first in 2007.

Several of the 50 media members who regularly cover the league and are on the voting panel point to passers this season, too.

“ Russell Wilson has been the first-half MVP even if his stock might have dropped a little in the 44-34 loss to Buffalo in which he had four turnovers,” says John Clayton of ESPN 710 Seattle. “Still, Wilson is putting up some of the best numbers in NFL history.”

Vic Carucci of the Buffalo News goes with Ben Roethlisberger.

“I would have no problem going with Russell Wilson or Patrick Mahomes, either,” he says. “I just feel the Steelers are a most tangible example of how much a single player means to his team, when you compare what they were without him last season to what they are now. I know the same probably could be said of the Seahawks minus Wilson and the Chiefs minus Mahomes, but we’re witnessing it with Pittsburgh.”

Other voters in a modest sample mention Mahomes, Drew Brees and Josh Allen. Yep, all QBs.

Not surprisingly with his Steelers at 8-0, Mike Tomlin is lauded by Hall of Famer James Lofton and hall voter Rick Gosselin. Also intriguing is the support for Brian Flores and Matt Rhule.

“Matt Rhule and Brian Flores are my favorites, and I probably would lean toward Flores simply for the rebuild he has had since he got there, and the tough decision he made to change quarterbacks two games ago when the Dolphins were winning,” says Charean Williams of Pro Football Talk. “But Mike Tomlin will get my vote if the Steelers can remain undefeated. Sean McDermott also deserves strong consideration.”

Roethlisberger, who went out in Game 2 last season with an elbow injury, receives lots of support. So does the feel-good story of a year in dire need of one.

“ Alex Smith, ” notes Bob Glauber of Newsday, the president of the Professional Football Writers of America. “Based on football terms alone, it’s Ben Roethlisberger, who has returned from elbow surgery to lead the only unbeaten team at the halfway mark. But in human terms, it’s Smith by a mile. He could have left the game after suffering that gruesome leg injury in 2018, but overcame incredible odds to live out his dream and make it back.”

One name dominates the sampling.

“They should rename this award The Aaron Donald Award," Williams says. “He’s the best defensive player in football. The Steelers have about four players worthy of consideration, but that’s the problem: They have too many good players on that defense. I love watching T.J. Watt play, and Myles Garrett is having a good year for Cleveland in something of a comeback for him. But unless Donald gets hurt, I just don’t see anybody overtaking him for this award.”

Watt and Garrett receive mild support behind the two-time winner of this award.

Some years the MVP winds up winning here, too. So Wilson, Mahomes, Brees and Aaron Rodgers get some attention. But Gosselin suggests Vikings running back Dalvin Cook, who despite missing a game while injured leads the league in rushing (858 yards) and touchdowns (12). Lofton likes Tennessee's hard-running Derrick Henry for the honor that went to New Orleans WR Michael Thomas in 2019.

“You know he’s coming,” says Lofton of CBS Sports, “and there is little you can do to stop him.”

“The main Bucs talking point is, of course, everything Tom Brady does and doesn’t do,” Carucci says. “But Winfield is performing in ways that undoubtedly make his father, who was an exceptional NFL defensive back for many years, very proud. At times, you think you’re watching the old man all over again.”

“A late first-round pick of the Ravens, Queen has turned into a tackling machine and a worthy linebacker to carry on the Ray Lewis tradition,” Glauber says.

Until Roethlisberger won this in 2004, no quarterback had ever been chosen. It's a semi-regular thing now, including Matt Ryan, Cam Newton and Dak Prescott.

Through the halfway point, top overall draftee Joe Burrow of the Bengals and No. 6 selection Justin Herbert of the Chargers draw the mentions.

“ Joe Burrow has done wonders to make the Bengals relevant,” Glauber says, “but Herbert’s ascent is impressive. With 17 touchdown passes and just five interceptions on a team whose defense finds new and ever-more heartbreaking ways to lose games, it’s Herbert who provides hope for the future.”

Not so, according to Clayton.

“I’m leaning to Burrow over Herbert, but it’s a close race,” Clayton says. "Despite being on a team that has poor blocking and a bad defense, Burrow is completing 67% of his passes and has 11 touchdowns and 2,272 yards. But Herbert isn’t too far behind. Burrow knew going into the season he was going to be the starter. Herbert didn’t find out until close to the kickoff that he was going to play in Week 2.

With eight weeks to go.