Foreigners flock to Serbia to get coronavirus vaccine shots 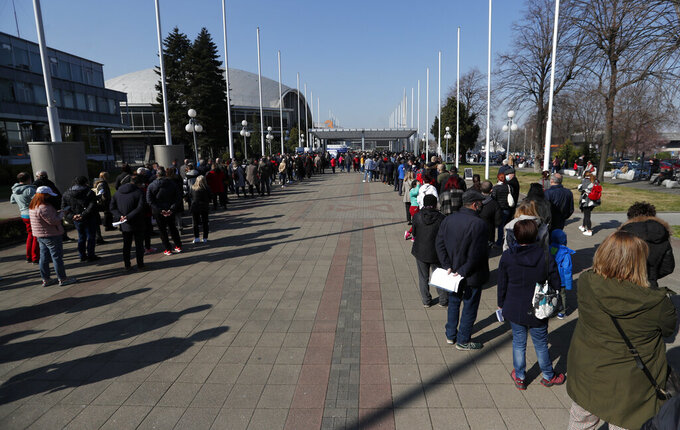 People wait in line to receive a dose of the AstraZeneca vaccine at Belgrade Fair makeshift vaccination center in Belgrade, Serbia, Saturday, March 27, 2021. Thousands of vaccine-seekers from Serbia's neighboring states have flocked to Belgrade after Serbian authorities offered free coronavirus jabs for foreigners if they show up over the weekend. Many arriving with their entire families, long lines of Bosnians, Montenegrins, North Macedonians and even Albanians formed Saturday in front of the main vaccination center in the Serbian capital. (AP Photo/Darko Vojinovic)

BELGRADE, Serbia (AP) — Thousands of vaccine-seekers from countries neighboring Serbia flocked to Belgrade on Saturday after Serbian authorities offered foreigners free coronavirus jabs if they showed up over the weekend.

Long lines of Bosnians, Montenegrins and Macedonians — often entire families — formed in front of the main vaccination center in the Serbian capital as police kept watch.

“We don’t have vaccines. I came here to get vaccinated,” said Zivko Trajkovski, who is from North Macedonia. "We are very grateful because we can vaccinate quicker than in Macedonia.”

Zoran Dedic of Bosnia noted that his country and Serbia were part of a joint federation before Yugoslavia disintegrated in a war during the 1990s. "It does not make any difference, Bosnia or Serbia. It does not matter,” he said.

Most of Serbia's Balkan neighbors have been struggling with shortages and have barely started mass vaccination drives, while Serbia boasts of having ample supplies and one of Europe's highest per capita vaccination rates.

The Serbian government has donated vaccine doses to North Macedonia, Montenegro and Bosnia.

Critics of populist Serbian President Aleksandar Vucic contend he is trying to spread his influence in the Balkans and to polish the ultranationalist image he acquired during Yugoslavia's bloody breakup.

Others say that the AstraZeneca vaccine shots Serbia is giving foreigners are nearing their expiration date and need to be used as soon as possible, a claim that could not be verified.

Klix reported that Bosnian businessmen were scheduled to receive jabs Saturday after Serbia’s Chamber of Commerce offered 10,000 shots to their colleagues in the region.

Serbia has one of the highest inoculation rates in Europe, mainly thanks to the government's large purchases of the Sinopharm vaccine from China and the Russian Sputnik V vaccine. The country also is using the vaccines developed by Pfizer-BioNTech and Oxford-AstraZeneca.

Although over 2 million people in the country of 7 million have so far received at least one shot, Serbia has seen a notable decline in number of residents signing up. Officials and doctors link the drop-off in interest to an increasingly vocal anti-vaccine movement.