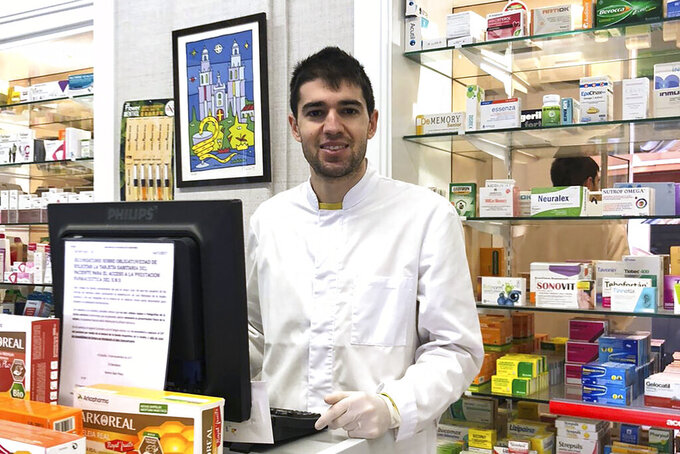 In this photo taken on March 18, 2020, soccer player Toni Dovale poses while working in his family pharmacy in A Coruna, Spain. Dovale, a former Sporting Kansas City and Celta Vigo player who came through Barcelona's famed youth academy, is back at work in his home country while soccer competitions remain on hold because of the COVID-19 virus. Dovale is making calls to try to guarantee there are enough protective masks, gloves and other medical supplies that can help slow the spread of the virus in hard-hit Spain. The COVID-19 coronavirus causes mild or moderate symptoms for most people, but for some, especially older adults and people with existing health problems, it can cause more severe illness or death. (Photo via AP) 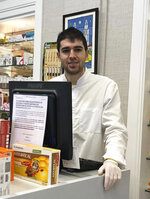 MADRID (AP) — Toni Dovale has a different routine than most Spanish soccer players during the coronavirus pandemic.

While some have been spending their time trying to stay fit or negotiating salary reductions with their clubs, Dovale is working to guarantee there are enough protective masks, gloves and medicine to help in the fight against the virus in hard-hit Spain.

The former Sporting Kansas City and Celta Vigo player who came through Barcelona’s famed youth academy has put on a white coat and is working in his family's small pharmacy in the northwestern city of A Coruña while soccer remains on hold because of the virus.

He had been playing in Thailand before coming to Spain for the holidays and got stuck when the outbreak started.

“I was packing my bags to go back to Asia for the new season, but the situation with the virus started to become tough,” the 30-year-old Dovale said in a telephone interview with The Associated Press this week. “I was not expecting to work now, but the only thing I could do was help. It was the right moment to come into the pharmacy and help my people.”

Spain has struggled with the coronavirus, registering more than 140,000 confirmed cases and nearly 14,000 deaths. The country has been in a tight lockdown since mid-March and the restrictions are expected to remain in place at least until the end of April. The nation's health system has been overwhelmed and the government has been seeking any help it can get.

“I decided that the best thing I could do was to help my community, to come to the pharmacy and try to help people, to do my best so we can get back to our normal lives as soon as possible and hopefully I can go back to playing soon,” said Dovale, who has a pharmacy degree.

Dovale is one of four workers at his family’s pharmacy, and that’s including his mother, who is among the high-risk group for infection because of her age. They have been keeping social distancing among themselves and only three customers can enter the pharmacy at a time.

Dovale is a do-it-all employee, but one of his main responsibilities is to negotiate the purchase of medicine and supplies with laboratories and other providers.

“There is a shortage of many medicines. We don’t have masks, we don’t have alcohol. Gloves are not easy to find,” he said. “I try to call labs and everybody who can provide me material to help these people. It’s really painful when people come to the pharmacy asking for a mask and you cannot get this kind of stuff for them.”

Dovale said pharmacies have been crucial for people with non-coronavirus illnesses.

“We cannot forget that people can still become sick,” he said. “People still have diabetes, still have hypertension and many other problems. It’s very important that we take care of them, because the hospitals are collapsed and crowded.”

Dovale, an offensive midfielder with good playmaking and passing skills, scored four goals and had four assists in his 25 matches with Sporting Kansas City in Major League Soccer in 2014.

“Great experiences,” said Dovale, who also had a stint with Bengaluru FC in India and was playing with Thai club Navy FC before the coronavirus pandemic left him stuck in Spain and led to the end of his contract.

Dovale said he feels he has four or five years of good soccer ahead of him, and he wouldn’t mind going back to Asia or the United States.

“The challenge of playing for titles and playing in international competitions is what makes me keep going forward,” he said. “In Spain, it is really difficult because only two teams can fight for titles.”

Dovale is trying to stay fit as well as he can, training in the morning at home and in a parking lot before going to the pharmacy.

He said he hoped the United States would be spared the things he has witnessed in Spain.

“This situation just hit us from the back," Dovale said. “My people, my community, are going through a lot of pain. I just pray for the people in the U.S. to stay safe. Hopefully they can stop it a little earlier than us, because for our country, for our community, it’s really painful and we will not forget about this situation, for sure.”