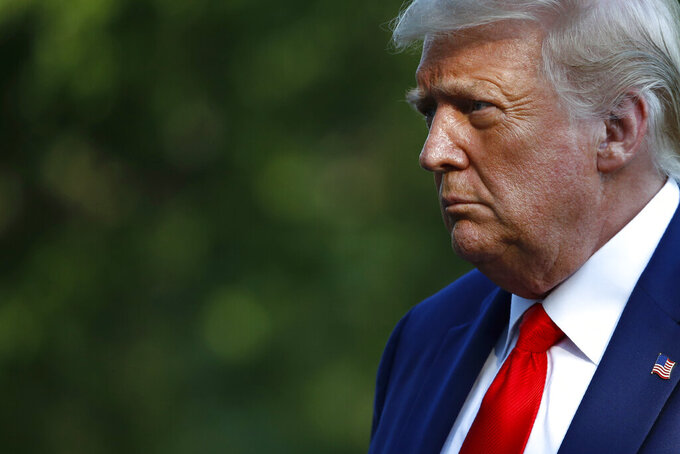 President Donald Trump walks on the South Lawn of the White House in Washington, Wednesday, July 15, 2020, after stepping off Marine One. Trump is returning from Atlanta. (AP Photo/Patrick Semansky)

NEW YORK (AP) — President Donald Trump is adamant that he wants another four years in office. It's less clear what he would do with them.

The Republican president repeatedly assailed Democratic rival Joe Biden during a rambling, hourlong Rose Garden news conference Tuesday that doubled as a reelection rally. But he offered few clues about what he would do if he remains in the White House. He similarly stammered through an interview last month when pressed by a friendly TV host to talk about what a second term would look like.

With the election less than four months away, Trump's focus is more on winning than on how he would govern. He's offered no substantive policy proposal, opting instead for heated rhetoric on race, crime and socialism aimed at his most loyal supporters. Biden, meanwhile, is releasing a growing number of proposals touching on topics including trade and climate change.

Trump is reshaping his campaign, announcing Wednesday that veteran GOP operative Bill Stepien will replace Brad Parscale as campaign manager. But it's unlikely the move will change Trump's preference to focus more on messaging rather than a policy agenda. Some Republicans said that reflects the challenge of asking voters for another term amid overlapping public health and economic crises.

“During a reelection campaign, you basically are making the argument that the status quo is really good and that the challenger is insufficient to do the job. And for more than three years, he could credibly make that argument about the economy,” said Mike DuHaime, senior adviser to former New Jersey Gov. Chris Christie's 2016 presidential campaign.

“The problem comes when the status quo isn’t good and there is hard data — both on the economy and with COVID — that shows that,” DuHaime said, referring to the coronavirus. “That makes it much harder to make an argument about the next four years.”

Still, the question of what to do with four years in the White House is one of the most basic elements of a presidential campaign — even for an incumbent. Trump's challenge became apparent late last month when he struggled to answer the question during an interview with Sean Hannity of Fox News Channel.

“You know the story, riding down Pennsylvania Avenue with our first lady and I say, ‘This is great,’ but I didn’t know very many people in Washington. It wasn’t my thing. I was from Manhattan,” Trump said as part of his answer, before eventually calling John Bolton, his former national security adviser, an “idiot.”

Trump didn’t name a single policy objective, and, in the days that followed, the messaging from the White House seemed to rely solely on the idea that because Trump presided over a strong economy once, he would be the right person to build it back. But it has yet to put forth much of a positive agenda, instead focusing on painting a dystopic picture of the nation if Biden came to power.

“There has never been an election where we’ve had this kind of difference" between the candidates, Trump said, before painting a bleak, crime-filled portrait of the Democrats' governing philosophy. “It’s radical left, and it’ll destroy our country."

His Rose Garden address on Tuesday haphazardly bounced from topic to topic, from China to statues to Biden and back again, resembling not an official government event but rather a facsimile of the campaign speech the president had wanted to give three nights earlier at a New Hampshire rally that was called off because of sparse crowds and a somewhat ominous weather forecast.

It was a display of Trump in full, an equal mix of braggadocio, grievance and vicious partisan politics. But what was missing were any specific plans to right the country’s economy or improve the fortunes of its citizens.

“There’s no agenda because he himself is the agenda,” said presidential historian Jon Meacham. “In 2016, Trump was a vehicle; now, amid a cataclysmic pandemic that he has failed to manage, fewer people outside the core base want to hear anything other than how do we get safely back to real life. Because he has no answer to that overarching question, he just talks — about, inevitably, himself.”

There have been presidential candidates in the past tripped up by the question “Why do you want to be president?” including, perhaps most notably, Ted Kennedy ahead of the 1980 election. But it is rare for an incumbent to have so little to detail as to why he should be able to keep his job.

When asked for the president’s second-term agenda, the White House pointed to Trump’s response to COVID-19 but offered little in the way of specifics.

“As the President continues to lead a whole-of-government response to a global pandemic, restore law and order to our communities, and rebuild the economy,” said spokesperson Judd Deere, “the White House is engaged in an ongoing policy process for a bold second term agenda that continues the 'Transition to Greatness’ that ensures we are a safer, stronger, more prosperous America.”

White House officials also pointed to promises of better trade deals and maintaining law and order, but the lack of details gave Biden's team an opening.

“This president’s inaction to get the virus under control has cost thousands of lives and millions of jobs. Why should voters continue to let him lead during this once-in-a-generation crisis?” said Biden national campaign spokesperson TJ Ducklo. “Don’t ask him, he doesn’t have an answer.”