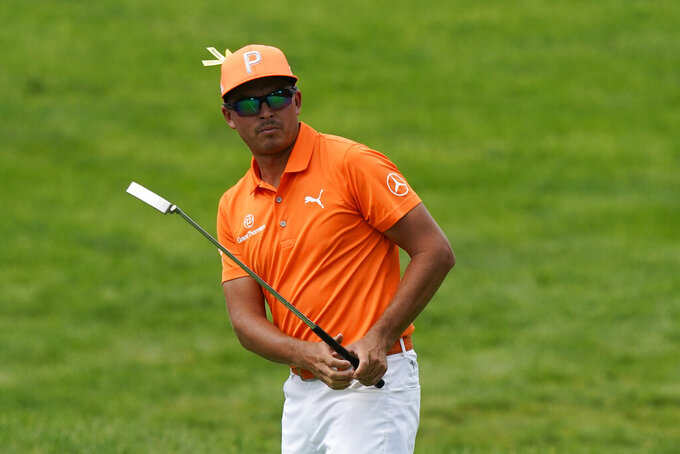 Rickie Fowler watches his putt on the first hole during the final round of the Memorial golf tournament, Sunday, June 6, 2021, in Dublin, Ohio. (AP Photo/Darron Cummings)

COLUMBUS, Ohio (AP) — Already facing a long day, Rickie Fowler found the road even tougher Monday in 36-hole qualifying as he tried to avoid missing the U.S. Open for the first time in 11 years.

Fowler was among 685 players seeking 54 spots in nine qualifiers across eight states to fill the field for the U.S. Open, which starts June 17 at Torrey Pines in San Diego.

He played his opening round at Brookside in 1-over 73, which was halted for three hours because of heavy rain and thunder, meaning he likely would need at least a 65 at The Lakes to have any chance.

Fowler wasn't going down without a fight. He was 4 under for his round — 3 under for the qualifier — through 13 holes when it was too dark to continue because of the rain delay.

As if the longest day wasn't long enough, Fowler and several others had to return Tuesday morning. Fowler probably needed at least three birdies over his last five holes to keep his hopes alive for returning to the U.S. Open.

Fowler is coming off a tie for eighth in the PGA Championship and a tie for 11th at the Memorial, his best two results of the year. He already has missed the Masters from falling well outside the top 50 in the world.

Chez Reavie was assured of getting through after rounds of 65-67.

Three-time major champion Padraig Harrington was on the bubble, needing at least two birdies over his last five holes. Former Masters champion Charl Schwartzel made a big surge, 6 under through 14 holes on his round at the tougher Brookside course and in reasonable shape to get one of the 16 spots in Columbus.

Former PGA champions Keegan Bradley and Jason Dufner each shot 72 at Brookside and finished at 5-under 131. That was tied for 16th, though likely to leave them out.

The delay caused other problems. The first round didn’t end until close to rush hour, and the courses are 13 miles apart. Fowler had to deal with traffic, leaving him time to park, grab a hot dog, hit a few putts and head back out.

Henry Lee of Canada was the last player to tee off. He had a half-eaten hamburger resting on his golf clubs as he teed off at 5:45 p.m.

Ohio had another qualifier an hour away in Springfield, which had no such weather delays. Carson Schaake finished at 9-under par to lead the seven players who advanced to Torrey Pines. Schaake also was medalist at his local qualifying and will be making his Open debut.

Branden Grace went from a fourth-place finish at the Memorial to an early start in Jupiter, Florida, and he parred the final hole at The Bear’s Club to earn one of six spots available. Grace chose to play in Florida because it’s his home course.

Patrick Rodgers led all qualifiers in Florida. Also getting through was Luis Gagne, who shared low amateur honors in the 2018 U.S. Open at Shinnecock Hills.

Rick Lamb made an 8-foot birdie putt on the fourth extra hole — 40 holes for the day — to claim the fifth and final spot in Atlanta.

In the New York qualifier, Cameron Young led four players who earned spots. Young recently won back-to-back weeks on the Korn Ferry Tour. Another qualifier was Andy Pope, who now has qualified for the U.S. Open for the fifth time in his last six tries. Pope didn't get a chance last year when the COVID-19 pandemic forced the USGA to do without qualifying.

Wilson Furr made it to his first U.S. Open when he least expected it. He played poorly while trying to qualify for the PGA Tour event this week at Congaree in South Carolina. He was an alternate for the U.S. Open qualifier at Long Cove Club in Hilton Head and thought about not even showing up. It was a good thing he did. Four players withdrew, and Furr had a tee time.

He had rounds of 67-70 and was among five players who earned spots. The last one went to Akshay Bhatia, who made a par on the second extra hole of a 3-for-1 playoff.

“I told my buddy last night, ‘If I get in this thing, I’m getting through,'” Furr said.

Taylor Pendrith of Canada tied for 23rd at Winged Foot last September in his U.S. Open debut and gets another crack at it. He led the four qualifiers at the Maryland site.

Joe Highsmith, part of Pepperdine's national championship team last week, earned one of the two spots in Washington state. The other qualifier was in Los Angeles.

England did not have a qualifier this year because of travel restrictions related to the COVID-19 pandemic. The USGA instead created a special points list from the last three European Tour events. Marcus Armitage won in Germany and earned one of the 10 spots.

When the qualifiers are over, the U.S. Open will have 155 players. One spot is reserved in case a player were to win a second PGA Tour event since last June. Four players at the Palmetto Championship at Congaree had that chance — Brian Gay, Hudson Swafford, Martin Laird and Richy Werenski.

Laird was on the verge of making it through the Columbus qualifier.