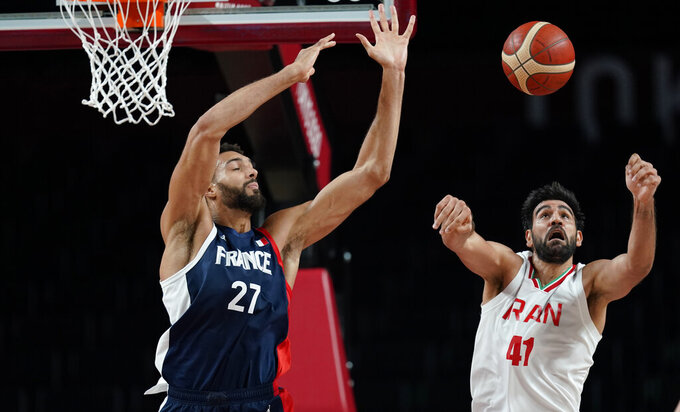 SAITAMA, Japan (AP) — Arsalan Kazemi spoke sadly and not because his Olympics were over.

It's because Iran was never really ready when they started.

France is moving on and Iran is headed home in men's basketball, with the French easing to a 79-62 victory Saturday.

The French, with NBA Defensive Player of the Year Rudy Gobert centering one of the best teams in the world, had already secured an expected quarterfinal spot.

Iran went 0-3, which was also expected.

The Iranians rarely get to compete against NBA-caliber players or see NBA-sized facilities. So even largely empty, the Saitama Super Arena is an adjustment for most of Kazemi's teammates.

“They haven’t seen a gym this big,” he said. "It’s going to take them probably two, three days just to get used to the gym.

“If they would have allowed fans it would have taken probably 30 games to get used to the arena and all that.”

Kazemi, 31, said Iran's biggest facility has a capacity of about 2,500. And because of political sanctions against his country and travel restrictions due to the coronavirus, there were precious few opportunities to even get any road games.

The 6-foot-7 forward said Iran had a couple tuneup games against Spain and three against host Japan. Meanwhile, the U.S. hosted Spain, Australia, Argentina and Nigeria in Las Vegas for exhibition opponents that were good enough to make up an Olympic semifinals.

“They have their training came in Las Vegas, they stay in one time zone,” Kazemi said of those clubs. “These five games that we played, I traveled through maybe six different time zones to be able to play in these games.”

The veteran player made it clear he wasn't complaining, just explaining the challenges he said Iranian athletes face — and not just in basketball. Even with proper preparation, it's unlikely Iran would advance out of a group featuring the U.S. and France.

But the Iranians were better prepared when they last played in the Olympics in 2008, having been invited to play in the summer league in Salt Lake City, home of the Utah Jazz.

This time, Iran fought back from a big deficit in its opener before falling 84-78 to the Czech Republic. Then the Americans, after losing to the French in their opener, crushed them 120-66 in the next game.

“Unfortunately Iran played against (the United) States three days after our game,” France coach Vincent Collet said. “That’s why it was such a big spread at the end of the game.”

Thomas Heurtel scored 16 points for France on Saturday. Timothe Luwawu Cabarrot added 12 points and Nando de Colo had 10 points, five rebounds and five assists for the French, who opened Group A by beating the U.S. 83-76 and then breezed from there.

The French routed the Czechs 97-77 and then led comfortably throughout the second half against Iran.

They will get one of the top seeds when the draw is conducted to determine the quarterfinal pairings. The quarterfinals will be played Tuesday.

Former NBA center Hamed Haddadi had 18 points and 12 rebounds for Iran. Kazemi finished with 11 points and hopes that things would be better for Iran next time it qualifies for the Olympics.