With Franch back, Thorns top the Challenge Cup standings 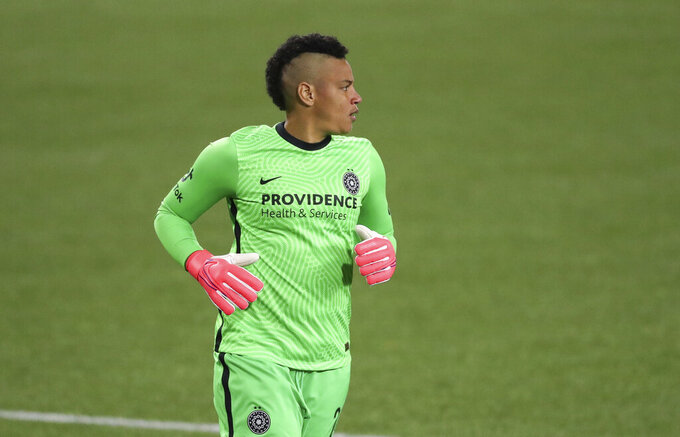 FILE - In this April 9, 2021, file photo, Portland Thorns' Adrianna Franch plays during the second half of an NWSL Challenge Cup soccer match against Kansas City in Portland, Ore. On top of the woes of quarantine, Franch had to spend four weeks of last season just trying to stay off her injured right knee. It was not an easy task for the 30-year-old Thorns goalkeeper known for her boundless energy. (AP Photo/Amanda Loman, FIle)

It was not an easy task for the 30-year-old Portland Thorns goalkeeper known for her boundless energy.

“For us as athletes, any time we have an injury, it’s tough. It’s a rollercoaster because we always want to be back, we always want to be there for our team and be able to play and do what we love. But the pandemic, constantly being at home, the injury itself -- that was probably one of my worst just because I was non-weightbearing for four weeks and that’s the longest time anybody’s told me to sit down on the couch," she said.

Because of the injury, Franch missed the National Women's Soccer League's Challenge Cup tournament last summer in a bubble in Utah. She also missed the league's fall series back in local markets later in the year.

Now she's back, playing in a preseason version of the Challenge Cup for the Thorns, who face Pacific Northwest rival OL Reign on Wednesday night.

The Thorns won the first two matches of the tournament to lead the West Division and could clinch a spot in the May 8 final with a victory over the Reign. But they'll need help — in the form of a win or a draw — from the Chicago Red Stars, playing the earlier game Wednesday against Kansas City.

“I think we feel really good about what the points and the results have looked like. But we all know we need to be better and we can be better," Thorns coach Mark Parsons said. “I actually feel very similar to the Challenge Cup last year where I could see a togetherness and appreciation for what we’re trying to do. However, the goals or the results weren’t there. I feel similar where we actually have the results and the goals so far, but we’re still not firing on all cylinders.”

Franch, called A.D. by her teammates, has been with the Thorns since 2016 when Portland acquired her rights from Orlando. At first, she was backup to starter Michelle Betos, but became the starter in 2017 and earned the first of back-to-back NWSL Goalkeeper of the Year honors.

Because of her strong NWSL play, she broke into the senior U.S. national team and she was on the squad that went to France for the 2019 World Cup, although she did not play. She has made four total appearances for the United States, with one clean sheet.

Now that she's returned from injury, one of her tasks is getting to know the tendencies of Portland's additions both last year and heading into this season. Among them are fellow national team players Becky Sauerbrunn and Crystal Dunn.

“Last year, definitely had a little bit of FOMO, wanting to be with the team and play with them, especially in training and practice. And so in February, we all got back as a team and I was like a little puppy dog when I first came in," she said. ”My tail was waggin’ and I was so excited to see everybody. I still am excited to be out there playing with everybody. And, you know, we get to play Seattle coming up. So how can you not be ready?