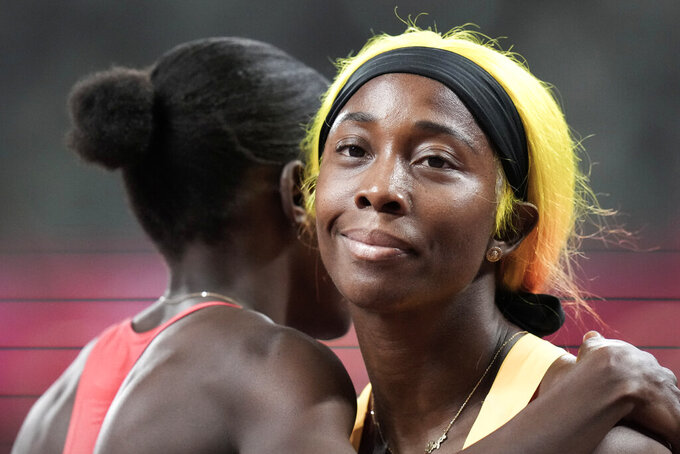 But that one defining moment at the Games to carry with you for the rest of your life?

“I haven’t had it yet. I don’t think I’ve had it yet," Fraser-Pryce said Saturday after finishing second in the 100 meters at the Tokyo Olympics to Jamaican teammate Elaine Thompson-Herah.

In a way, Fraser-Pryce, the greatest sprinter of her generation and, for some, the greatest ever, didn't have to say it. Her face did all the talking after the much-hyped race at the Olympic Stadium — her last-ever 100 race at the Games.

The desperate disappointment was so obvious as Thompson-Herah blazed ahead of her to win that gold and break Florence Griffith Joyner's Olympic record for good measure.

Fraser-Pryce's reaction said it all at the finish line. Also, later as she gathered herself, drawing in deep breaths and answering time after time as everyone kept asking her how she felt.

“Have you ever lost anything?” she eventually shot back to one of the questions. "Yeah? So you’re definitely going to feel disappointed. That’s your first reaction. And I am always an honest athlete. I’ve always been an honest athlete and I believe, yeah, you’re disappointed because you didn’t run the race you wanted to run.

“The only aim an athlete lines up for is to win but that didn’t happen tonight."

She confirmed — again multiple times and to multiple questions — that Tokyo would indeed be her last Olympics.

“Man, I’ve been getting that question so often," she said. And she repeated: “I did say that this is my final Olympic appearance.”

She'll run at the world championships next year in Eugene, Oregon, in her last season in track, she said. She'll be 35 when it all ends.

So what does that leave in terms of Olympic possibilities for Fraser-Pryce if she's still searching for her moment? It leaves the 200-meter race at Tokyo, her last individual race at the Olympics and a very last chance.

Thompson-Herah and many others, a field almost as deep as the one in the 100, are waiting in that contest, too.

"I definitely believe that something is there,” Fraser-Pryce said, knowing she has to lift herself now after the 100 race.

“To put it in perspective, yeah, you’re disappointed, but you move on."