Freeman among trio of Braves on All-MLB first team 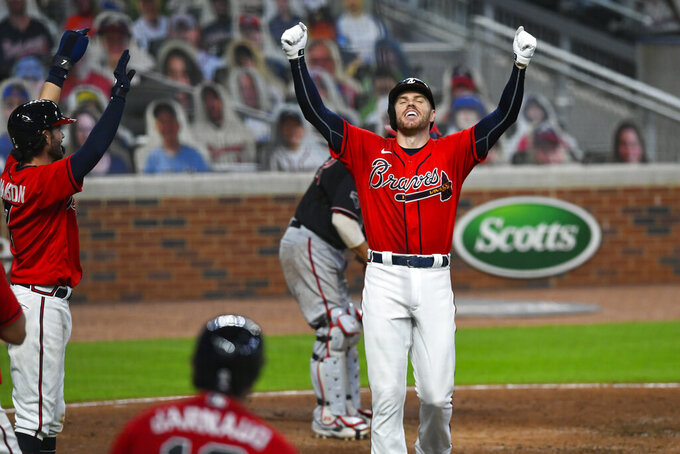 FILE - In this Sept. 4, 2020, file photo, Atlanta Braves' Freddie Freeman celebrates as he crosses home plate after hitting a grand slam to center field during the fourth inning of the second baseball game of the team's doubleheader against the Washington Nationals in Atlanta. Freeman easily won the NL MVP award Thursday, Nov. 12, topping off a trying year that saw him become so ill with COVID-19 he prayed “please don’t take me.” (AP Photo/John Amis, File)

The slugging first baseman was joined by Braves designated hitter Marcell Ozuna and starting pitcher Max Fried. Atlanta outfielder Ronald Acuña Jr. was chosen for the second team, giving the NL East champions more honorees than any other club following a 2020 season reduced to 60 games because of the coronavirus pandemic.

The starting pitchers were Gerrit Cole of the Yankees, Clayton Kershaw of the Dodgers, Dinelson Lamet of the Padres, Kenta Maeda of the Twins and Hyun-Jin Ryu of the Toronto Blue Jays. Cleveland closer Brad Hand and NL Rookie of the Year Devin Williams from Milwaukee were the relievers.

Betts received the most votes from fans. Trout, deGrom and LeMahieu were the only players elected to the first team each of the past two years.