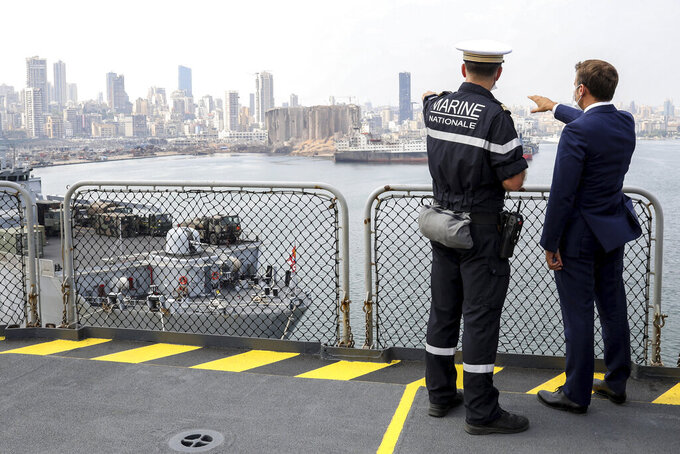 BEIRUT (AP) — French President Emmanuel Macron said Lebanese politicians have committed to a road map that begins with a government of experts to be formed in two weeks and quickly enacts reforms.

Speaking at the end of two days of meetings in Beirut, Macron said France was committed to helping Lebanon get out of its crisis, but failing to implement reforms within a three-month period would result in punitive actions, including withholding vital international assistance.

He did not rule out sanctions on the political class if they continue to engage in corruption, saying that sanctions, if imposed, will be targeted and coordinated with the European Union.

Macron is visiting for the second time in less than a month as Lebanon faces multiple crises and challenges including an unprecedented financial meltdown, economic collapse and the aftermath of last month’s massive explosion in Beirut's port that ripped through the capital.

“Going back to business as usual would be madness,” Macron told reporters at the end of his visit. “It is now up to the political forces in Lebanon to agree on the implementation of this road map.”

The visit was Macron’s second since the devastating Aug. 4 explosion — the most destructive single incident in Lebanon’s history, killing at lest 190 people and injuring more than 6,000. This visit was packed with events and political talks aimed at charting a way out of the crisis, and it also comes as Lebanon marks its 100th anniversary.

“If by the end of October it appears that the things that your leaders have committed to have not been achieved, this will lead to a reaction,” Macron said, adding that he would tell the international community that it cannot provide aid to Lebanon under these conditions.

Macron arrived late Monday, a few hours after Lebanon’s ambassador to Germany, Mustapha Adib, was appointed by President Michel Aoun to form a new government after winning the backing of major political parties and leaders.

The 48-year-old diplomat, little known to the public before he emerged abruptly as a consensus candidate, faces a mammoth task and he has been rejected by activists and a public demanding that long-ruling politicians stand down.

In a nod to opposition activists, Macron said the new government should be made up of experts and not representatives of political parties.

On Tuesday afternoon, a few thousand protesters gathered in Beirut’s landmark Martyrs’ Square for a peaceful protest against the ruling class seen as being responsible for the economic collapse and port explosion. “Time for accountability,” read one banner put up by demonstrators. Police later fired tear gas at protesters who started pelting security forces with stones and trying to break through security barricades to reach Parliament.

Speaking to Politico en route from Paris to Lebanon on Monday evening, Macron said he wanted credible commitments from political party leaders on reforms, including a concrete timetable for change and parliamentary elections within six to 12 months. “It’s the last chance for this system,” he said.

At the news conference Tuesday, however, he said that there was no consensus on early elections and that it was not part of the road map.

On Tuesday morning, the French president went to a forest in northeastern Lebanon where he planted a cedar tree to mark 100 years since the State of Greater Lebanon — the precursor of the modern state of Lebanon — was established. Lebanon was a French protectorate until it gained independence in 1943.

French warplanes flew in formation, spraying smoke the colors of the Lebanese flag over the Jaj forest in the Byblos region. During the planting ceremony, Macron hugged Tamara Tayah, an 11-year-old victim of Beirut’s port blast, whose mother, Hala Tayah, was killed in the explosion.

Macron also visited the port of Beirut and a hospital in Beirut, where he spoke to victims of the Aug. 4 blast. He was applauded inside the hospital when he arrived and a young woman offered him a bouquet of flowers.

Wives and mothers of prisoners protested outside and tried to get Macron’s attention about coronavirus infections in prisons.

France and the international community have said they will not provide financial assistance to Lebanon unless it implements reforms to fight widespread corruption and mismanagement that have brought the tiny nation to the brink of bankruptcy. Adib, a dual Lebanese-French citizen, promised to carry out the mission as he prepared to form a new Cabinet, saying he will work on reaching a bailout deal with the International Monetary Fund.

The IMF welcomed Adib's nomination, hoping a new government will be formed shortly "with a mandate to implement the policies and reforms that Lebanon needs to address the current crisis and restore sustainable growth.”

Lebanon has one of the highest debt ratios in the world at 170% of GDP and defaulted on paying back its debt for the first time in March. Seventeen rounds of talks between the IMF and the former government, which resigned six days after the port explosion, did not lead to a breakthrough.

In a step aimed at showing Lebanon is moving ahead with reforms, outgoing Finance Minister Ghazi Wazni on Tuesday signed three contracts related to a forensic audit of Lebanon’s central bank accounts to determine how huge amounts of money were spent in this nation plagued by corruption.

Also on Tuesday, the judge overseeing the investigation into the Beirut blast questioned four security officials who were based at the port and issued arrest warrants for them, the state-run National News Agency said. The four are an army intelligence brigadier general, a major with the State Security agency and two majors with the General Security Directorate, the news agency said.

The new arrests bring to 25 the number of people detained after the blast, many of them port and customs officials.